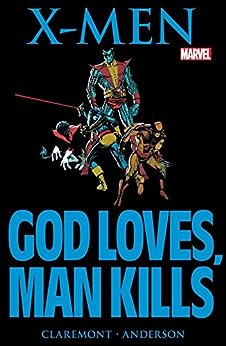 by Chris Claremont (Author), Brent Anderson (Illustrator, Cover Art, Artist) Format: Kindle Edition
Book 3 of 13: Marvel Graphic Novel (1982)
See all formats and editions
Sorry, there was a problem loading this page. Try again.
The Uncanny X-Men. Magneto, master of magnetism. The bitterest of enemies for years. But now they must join forces against a new adversary who threatens them all and the entire world besides... in the name of God.
Read more
Previous page
Next page
Kindle e-Readers
Fire Tablets
Free Kindle Reading Apps
Available on these devices 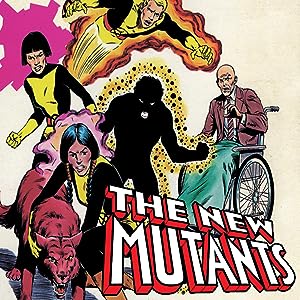 4.7 out of 5 stars
4.7 out of 5
858 global ratings
How are ratings calculated?
To calculate the overall star rating and percentage breakdown by star, we don’t use a simple average. Instead, our system considers things like how recent a review is and if the reviewer bought the item on Amazon. It also analyzes reviews to verify trustworthiness.

Matty
5.0 out of 5 stars Got this for 80 freakin’ cents
Reviewed in the United States on June 14, 2017
Verified Purchase
Thanks for the sale, Amazon. For through it, I discovered this absolute gem of an graphic novel. I purchased God Loves, Man Kills 10000% on a whim. Lo and behold it ended up being the X2 source material, a movie I really enjoyed. (Note: X2 changed the plot enough for this book to be a new, fun experience even if you’re familiar with the movie.)
And just to give unneccessarry detail, I’m more of a DC guy. I’m not really into Avengers, but I do love classic books like Civil War and the OG Secret Wars. This book is going to change all that. (I’ve already starting Wolverine by Claremont—amped!!)
Without giving too much away, this story is extremely timely, and the villain is one of the most disgustingly evil villains I’ve had the pleasure of reading. I cannot believe how much I hated him by the climax. Unbeatable value, even for 2 bucks. Just make sure to read it in the Comixology app, as the panels are too small to read on Kindle.
Read more
23 people found this helpful
Helpful
Report abuse

joel wing
TOP 100 REVIEWER
4.0 out of 5 stars A story about hate
Reviewed in the United States on March 10, 2019
Verified Purchase
For a period Marvel published a number of graphic novels. God Loves Man Kills with writing by Chris Claremont and art by Brent Anderson was one of them.

It focuses upon a Reverend Stryker who has built up a large following and has decided to use it to preach against mutants. Not only that, but he has a small army called the Purifiers that hunt them down, and then kidnaps Professor Xavier in an attempt to wipe them out.

The theme and the story is a common one between love or hate, mutant haters versus human-mutant cooperation. You also get the message from the other side from Magneto talking about creating a mutant nation, and then a big speech by Cyclops about what hate is about. This highlights the fact that the X-Men were originally conceived during the civil rights movements to indirectly talk about race relations in America.
Read more
10 people found this helpful
Helpful
Report abuse

kaneda amuro
5.0 out of 5 stars X-Men Should Be Read In Class To Teach Equality
Reviewed in the United States on August 25, 2017
Verified Purchase
Chris Claremont is one of those classic X-Men writers for a reason. "God Loves, Man Kills" is proof of his hailed stature. This is an exciting story that is extremely relevant to today's political climate. If you hate Marvel, but this. If you love Marvel, buy this. If you are a teacher working to impress equality on young minds, buy several for your class to dissect. The X-Men have never shied away from radical issues, proven here. If everyone read and understood their stories, we'd have less wars over trivial personal differences, or differences we can't change about ourselves. This is a great book. Enjoy it well.
Read more
20 people found this helpful
Helpful
Report abuse

Christopher Rogers
3.0 out of 5 stars Classic Story
Reviewed in the United States on March 15, 2019
Verified Purchase
A good dose of classic X-Men from 1982, which was the (loose) inspiration for X2. A pseudo-Christian minister is the villain, but the disturbing thing is the misapplication of Bible verses in the hands of an antichrist. Nightcrawler (A Christian character) could have provided some balance. Some scenes will be disturbing. (Xavier suffers a psychic hallucination of being crucified, and Is viciously attacked by demonic versions of the X-Men while on the cross.His heart is ripped out by "Kitty Pryde" and he is viciously mauled by "Wolverine.". In an early scene , two children are.shot dead and their bodies hung from a swing set.).
Read more
6 people found this helpful
Helpful
Report abuse

Paddy H
3.0 out of 5 stars Poor shipping
Reviewed in the United States on April 6, 2020
Verified Purchase
First I want to say this is the absolute greatest X-MEN story line by Chris Claremont. It is a personal favorite of mine and a must read for any Marvel fan. The thing that upset me was it was shipped to me without a protective sleeve and back. Now I would most certainly still recommend this issue to anyone but beware if you are collecting pivotal issues such as this one there is a chance you may receive this damaged.
Read more
Helpful
Report abuse

Jonathan Jurgensmeyer
5.0 out of 5 stars Wasn't expecting much... But very impressed
Reviewed in the United States on November 10, 2017
Verified Purchase
For the surprising price this book is worth it, and this story got a little dark at times, but epic in others. This story is interesting but the 'death's' got a bit repetitive at times, but it was needed to tell the story. It can be a bit dark at times as well, but it will keep you hooked to the story. One thing I loved was the presence of Magneto, every time he entered something epic happened and was really put out what kind of powerhouse he is. If your unsure of the X-men and looking for a classic story, this is definitely worth checking out!
Read more
4 people found this helpful
Helpful
Report abuse

Ariana
5.0 out of 5 stars Would Definitely Recommend Adding to Your Comic Book Collection
Reviewed in the United States on October 21, 2020
Verified Purchase
I had to purchase this comic book for a class (Best class ever!!!), and it was a very good read! I love how X-Men comics bring to light issues that reflect racism and xenophobia into a world that is not only entertaining but educational. I am definitely going to read this over again in the future.
Read more
Helpful
Report abuse
See all reviews

GnorthernGnome
5.0 out of 5 stars The Perfect X-Men Storyline
Reviewed in the United Kingdom on January 27, 2016
Verified Purchase
I picked this up after reading several online recommendations that it was the quintessential X-Men storyline and I must say I wholeheartedly agree. A fair warning, this is not a long story, nor is it a story-arc or anthology; the book is only 1cm thick or so and doesn't take long to read. However, it is an exceedingly well written, well paced and beautifully coloured story that is as relevant now as it was when it was written.
If you're a fan of the X-Men, this is a must buy. It's a great place to start in the X-Men universe as well, if you're new to graphic novels, and is a great introduction to all the characters. A little familiarity won't hurt but it's definitely not necessary to enjoy the story, which is almost entirely self-contained. This is also that rare graphic novel that I would recommend to non-superhero fans or those who have never picked up a comic book before, the story carries it through perfectly and has a core message that anyone would enjoy. 10/10, look forward to reading it again many times in the coming years!
Read more
3 people found this helpful
Report abuse

M. C. James
5.0 out of 5 stars Daring piece of comic writing
Reviewed in the United Kingdom on August 16, 2018
Verified Purchase
I enjoyed this a lot. It's worth reading the interview with Chris Claremont at the end where he talks about the novel. For its time its quite a daring piece of writing and, of its time, may have forced some adult readers to re-evaluate their notion of what a comic is capable of communicating.
Read more
One person found this helpful
Report abuse

RMDW
4.0 out of 5 stars Good story with interesting themes
Reviewed in the United Kingdom on March 24, 2016
Verified Purchase
God Loves, Man kills has an excellent story dealing with civil rights issues; the extremes some people are will to go to achieve there goals; the dangers of extremism in politics; and how loss can effect peoples beliefs. This the comic that the 2003 X-Men film was based on and i think that the film faithful to the story of the comic with updates for a audience 20 years on.
Read more
Report abuse

M. Pasquale
4.0 out of 5 stars Great Story
Reviewed in the United Kingdom on April 16, 2014
Verified Purchase
It's really cool to see the story from the X2 film as it was originally. It's always cool when Magneto isn't the baddie as well, but helping the Xmen
Read more
3 people found this helpful
Report abuse

Davin
5.0 out of 5 stars A must read
Reviewed in the United Kingdom on March 2, 2018
Verified Purchase
An amazing story arc which felt so realistic as it portrayed similar real world issues that happens both in the past and even in modern days
Read more
Report abuse
See all reviews