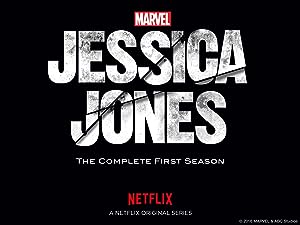 (577)7.92015TV-MA
Haunted by a tragedy, Jessica settles in Hell's Kitchen, New York opening her own detective agency, discovering the source of her trauma has resurfaced.

RDDReviewed in the United States on May 10, 2020
5.0 out of 5 stars
A Must-Watch for Marvel Fans!
Verified purchase
“Marvel’s Jessica Jones: The Complete Season 1” introduces Krysten Ritter as Jessica Jones, Mike Colter as Luke Cage, Rachel Taylor as Patricia “Trish” Walker, Wil Traval as Will Simpson, Eka Darville as Malcolm Ducasse, Carrie-Anne Moss as Jeri Hogarth, and David Tennant as Kilgrave with Rosario Dawson making some guest appearances as Claire Temple. The season focuses on Jones, an alcoholic private investigator, who pushes away everyone close to her while investigating Kilgrave, a man with mind control abilities who once controlled her. She meets Luke Cage and they bond over their mutual special powers while Jones also does P.I. work for Jeri Hogarth, a powerful attorney who’s not above bending the law to win in court.

The series adapted Brian Michael Bendis’ “Alias” comics, with the first episode fairly faithfully adapting the first issue. Though this series tones down some of the comic book elements – for example, Kilgrave goes by his name rather than calling himself the Purple Man (and the show even states that he chose Kilgrave as a name because it sounded cool) – it does maintain the gritty realism of Bendis’ comics. Like all of the Netflix Marvel series, it uses color and lighting to evoke a mood and create a distinctive look just like a comic book, in this case making use of blues and purples. Though the series takes place in the Marvel Cinematic Universe, it only makes the occasional references to the films and instead stands on its own, while working to set up characters who appear in the other Netflix series like Luke Cage and Jeri Hogarth.

AlbuquerqueReviewed in the United States on April 18, 2019
5.0 out of 5 stars
Great show. Damaged case.
Verified purchase
The blue-ray format for this show is a nice upgrade over HD video via cable. The video detail and audio are excellent. Video color and contrast are close to perfect. Great detail from the lightest colors to deep shadows. The only issue is with the case itself which arrived damaged inside. The problem appears to be with the high speed assembly machinery pushing down too hard on the case, cracking or breaking some of the internal plastic supports. The discs arrived in good condition. The case, not so much. Great series.
5 people found this helpful

ChaminadReviewed in the United States on June 16, 2017
5.0 out of 5 stars
Powerful and deeply emotional
Verified purchase
This show is awesome and helped me through a difficult emotional time.
6 people found this helpful

K. F.Reviewed in the United States on April 21, 2018
4.0 out of 5 stars
Great show, bad case
Verified purchase
Fantastic show. The Blu-ray quality is significantly higher than Netflix streaming (Luke Cage is actually black instead of green!), so it's certainly worth owning on disc even if you have Netflix. I knocked off a star because every time I pick up the case, some new part of the cheap plastic breaks off. When will manufacturers stop peddling these fall-apart cases?
4 people found this helpful

BorberigmyReviewed in the United States on May 30, 2018
1.0 out of 5 stars
Don't buy this from Amazon
Verified purchase
Did not notice the warning that this item was not playable in my area. I've since watched Jessica Jones elsewhere and would rate it a 4-star.
6 people found this helpful

Robert EReviewed in the United States on December 16, 2020
5.0 out of 5 stars
Great Series
Verified purchase
Since it is a Netflex series it comes late to DVD but I really like this one. It was especially wild, keep your interest. I highly recommend this series and can't wait to get my hands on Season 2.
One person found this helpful

AKA SullyReviewed in the United States on October 30, 2018
5.0 out of 5 stars
Best of Marvel
Verified purchase
What a terrific performance Krysten Ritter gave us as Jessica Jones. Marvels most bing-worthy series came in the form of a “hard-drinking, short-fused, mess of a woman” .. I’m going to miss this show after Season 3.
2 people found this helpful
See all reviews
Back to top
Get to Know Us
Make Money with Us
Amazon Payment Products
Let Us Help You
EnglishChoose a language for shopping. United StatesChoose a country/region for shopping.
© 1996-2021, Amazon.com, Inc. or its affiliates