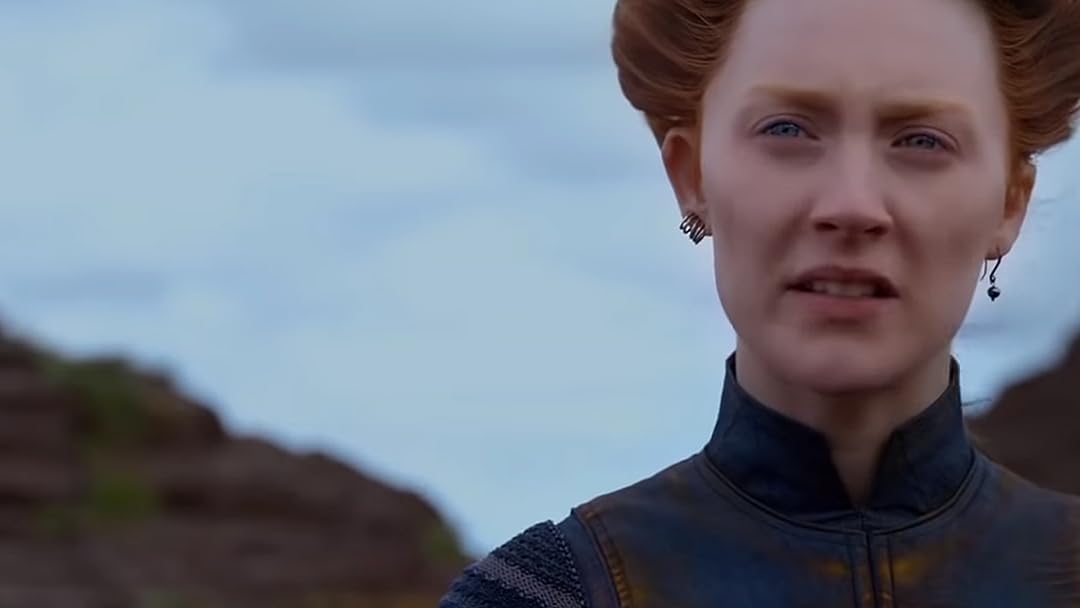 (4,731)6.32 h 3 min2018X-RayR
HD. Fiery feminist take on the rivalry between Mary Stuart and her first cousin Elizabeth I, who rules as the Queen of England.

Rosary A. CasielloReviewed in the United States on December 25, 2018
2.0 out of 5 stars
Would have been nice if they stuck to the actual story!
I knew from the first 10 minutes that this film would be disappointing. There were way too many misrepresentations in this film. Just as an example, unless you were knowledgeable about her story, you would not know about the death of her 1st husband (Francis), the hatred the DeMedicis had for Mary, the well-known "Four Marys" who were her constant attendants, and how she was "accosted" by John Knox upon her arrival at the Port of Leith. One of the most important screeches John Knox said against Mary and her religion is well noted in history, yet it was completely missing from this film. The film didn't show the true relationship between Mary and Bothwell; instead, it showed Mary as hating him and being forced to marry him. No mention later on in the film of where Bothwell ended up (he was captured by James' forces and wound up insane in a Danish prison). The film portrayed James as friendly and supportive of Mary, which is completely opposite. He hated her. Some of the characters in the film were stunningly unreal. There are numerous other misconceptions in this film, but most striking was the complete lack of any mention of the Casket Letters which were so pivotal in the history of Mary, Bothwell and her capture by Elizabeth. At the Kirk O'Field house where Darnley was recuperating from his sexually transmitted disease, this film showed him with a fairly un-poxmarked face and a male companion in the room with him. In truth, Darnley was in the room by himself after Mary left him to attend the wedding of one of her attendants.

There was also no mention whatsoever about the people on the outside who worked to try to help her escape and who paid with their lives for this. No mention at all of all the different castles she was moved to during her time in England. This was vital to the story of Mary's incarceration by Elizabeth.

The film is also very dark.

The film produced years ago with Vanessa Redgrave and Glenda Jackson is far superior and more accurate.

Paul AllaerReviewed in the United States on December 26, 2018
4.0 out of 5 stars
3.5 stars... well-intended historical drama falls short of expectations
"Mary Queen of Scots" (2018 release from the UK; 125 min.) brings the story of Mary Stuart's reign over Scotland. As the movie opes, it is "England, 1587" and it appears Mary is getting ready for execution. We then go back in time to "Scotland, 1561", as Mary makes her way to Edinburgh's Holyrood Palace, where at age 19 she starts her rule as Queen of Scotland. But she also lays claim to the throne of England if her cousin Queen Elizabeth doesn't produce an heir... At this point we are 10 min. into the movie but to tell you more of the plot would spoil your viewing experience, you'll just have to see for yourself how it all plays out.

Couple of comments: this is the first feature film for longtime British theater director Josie Rourke. The film is a well-intended historical drama that nevertheless falls short of expectations for a couple of reasons: first and foremost, what should be palace drama that raises the hairs on your arms, plays out meekly for much of the movie. Second, the movie's pacing is too slow, dare I say too theatrical, and hence the movie feels overly long at 2 hrs. and 5 min. Lastly, while the film is titles "Mary Queen of Scots", the movie tries to set it up as "Marty vs. Elizabeth", yet then forgets to provide an in-depth charter for Elizabeth. This is not to say that there aren't good elements to the movie. Saoirse Ronan's striking figure is perfect for Mary. Margot Robbie does the best she can with the smaller role of Elizabeth. The costumes are fabulous, as as the outdoor shots in Scotland. I can't help but also feel a bit disappointed when I compare this to that other recent historical drama (set 150 years later), "The Favourite", which frankly is the better movie. As a complete aside, there also has been quite a bit of noise on social media about a number of historical inaccuracies in "Mary Queen of Scots", but I'm not a historian or expert myself and hence am not going to comment on that.

"Mary Queen of Scots" opened last weekend, and we decided to make it our annual Christmas Day movie. The early evening screening where I saw this at here in Cincinnati was sold out down to the very last set, which didn't really surprise me, given that Christmas Day is the busiest movie theater day of the year. If you are into historical dramas, or simply a fan of Saoirse Ronan or Margot Robbie, I'd readily suggest you check this out, be it at the theater, on Amazon Instant Video, or eventually on DVD/Blu-ray, and draw your own conclusion.
105 people found this helpful

LADY LIBERTYReviewed in the United States on August 29, 2019
1.0 out of 5 stars
Historically inaccurate- gag worthy
Verified purchase
I am a person of color, but it was not necessary to weave multiple races into this movie. The people in this history were Caucasian; this was the reality in that region, during the period in the 1500's. This strategy to make a political statement, was distracting because I was offended history was being rewritten. I am an academic and this is troublesome to see. Artistic statements of this nature can be made, using more appropriate mediums. I couldn't finish it and wasted my money.
45 people found this helpful

DCistReviewed in the United States on March 9, 2019
1.0 out of 5 stars
Complete rubbish
Verified purchase
I'm an avid English history buff and eager to watch every period movie about the Plantagenet and Tudor eras. Wow, was this movie a disappointment! It's laced with inaccuracies, from Mary's accent to the myth that Mary and Elizabeth once met in person, and relies on trivial dialog and cheap sex scenes to push the plot along. I turned off the movie after 30 minutes.
52 people found this helpful

Amazon CustomerReviewed in the United States on February 27, 2019
2.0 out of 5 stars
Disappointing
Verified purchase
I love historical literature, and dramatization of history. This movie though portraying the sad events that were the lives of Mary Stuart and Elizabeth I, the out of time for the insertion of multicultural characters significantly distracted from the overall presentation of this story. Much of the cinematography and costuming was excellent. Dialogue with the characters was very good, but I was continually distracted from the story by the frivolous use of personages who never would have been present in Elizabethan England.
41 people found this helpful

GWHReviewed in the United States on February 25, 2019
4.0 out of 5 stars
VISUALLY STUNNING EPIC
Verified purchase
OK. A lot to unpack here if I can unpack it all. Which I doubt. Anyway, Mary Queen of Scots (2018) I saw this version when it came out this past December. I will state for the record that I liked it. It was made by the same company that made ELIZABETH (Kate Blanchett) and Elizabeth The Golden Age. So, for scenery and costume, and in my opinion - even the acting - was great. I enjoyed it. What I enjoyed most was that it was a very diverse film, using many nationalities and people of color in this film. I was very happy to see that - as Hollywood is taking a beating for their lack of diversity in films, and they seem to be trying to resolve that - going forward - and it was nice to see that attempt in this film.

Now, one (well not just one) of the top reviewers ripped the movie apart for all of its historical inaccuracies. Well, one of the top reviewers is telling the truth about that. There were a lot of historical inaccuracies with the film ... BUT, I want to say that ... it would really be a good idea if one did some research or knew something about Mary Queen of Scots before one sees this movie, because it does not provide one with a lot of information. Now, having said that, I view most movies like this as ... lets say ... Cliff notes, or highlights. The movie would go on forever if they tried to put everything in it that actually historically happened ... and American audiences (and probably European audiences as well) are not going to sit through a four or five hour historical drama. We barely want to sit through 2 hours, so, the only choice film makers have really is to put in the highlights of these historical films ... and if one wants to know more, or want all the facts, then one will either have to watch a documentary, or take a history class and do some studying. I do admit, I did not know a whole lot about Mary Queen of Scots before I went to see the film. I'm an old movie buff and a frustrated historian, so I own the Katherine Hepburn version ... and I couldn't get through it. I didn't like it, I didn't understand it, and I felt that it's more convoluted than even this one is. There is a series on Netflix about her called REIGN ... and ... I watched a couple of episodes of that too and I couldn't get into it. I think for me, I just found Mary Queen of Scots story difficult to understand. I knew as much about her story as it related to Elizabeth. I've seen most of the movies about Elizabeth, including the PBS series Elizabeth R (an amazing series), and none of them go into great depth about Mary Queen of Scots, but why should they, these drama's are about Elizabeth, not Mary Queen of Scots. So I never really tried to find out more than what I was being showed in the different versions of Elizabeth. I even watched Glenda Jacksons film version of Mary Queen of Scots that she did shortly after Elizabeth R ... to no avail. So, after seeing this 2018 version, it inspired me to do some real research on Mary Queen of Scots - because this movie really intrigued me.

So, to conclude this, it's my opinion that most women of the ancient world were pawns for men to use and abuse - and probably no one more so than Mary Queen of Scots - well, maybe Lady Jane Grey, but ... I've read some opinions of Mary Queen of Scots as being dumb or stupid. I don't think she was dumb, she definitely had an upbringing and education far beyond most women of her time and period. I think she didn't embrace the issues that were happening around her during her time or understand the politics thereof. I think that she was used and manipulated by the men of her period, including the men in her own family, and in my opinion I'm not really sure she understood "the game". Elizabeths upbringing was in sharp and extreme contrast to Mary's, and in my opinion I believe that made Elizabeth "more ready" to be the queen that she was ... and ultimately why Mary Queen of Scots ended up headless like she did.
16 people found this helpful
See all reviews
Back to top
Get to Know Us
Make Money with Us
Amazon Payment Products
Let Us Help You
EnglishChoose a language for shopping. United StatesChoose a country/region for shopping.
© 1996-2021, Amazon.com, Inc. or its affiliates