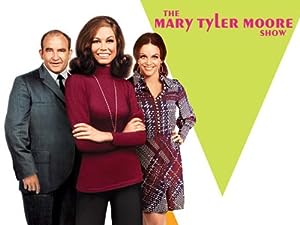 (476)8.11972TV-PG
o longer the new girl in town, Mary has come to think of the newsroom staff as family. But along with the good times and close friendships come the often trying"and ultimately hilarious"situations every family faces.

Laurie S. SchutReviewed in the United States on May 6, 2019
4.0 out of 5 stars
Such a great show!
Verified purchase
I loved the MTM show when I was a little girl, and this brings back such great memories. No issues with the discs. Picture is as good as you can get without HD. Sound is excellent. No issues whatsoever with the discs. Only reason I gave it 4 stars was because the plastic tabs that hold the disc "trays" (for lack of a better word), were broken off, so one of the trays wasn't secured at all. Didn't return it because I didn't feel like waiting for a new one.
2 people found this helpful
Report abuse

Roy AndersonReviewed in the United States on November 5, 2006
5.0 out of 5 stars
Moore of the same, please!
Verified purchase
In the golden years of Television - indeed in the golden years of Entertainment - quality was important. Performers on TV had honed their skills, during years of endeavour in halls and theatres across the country, perfecting their work. Musicians - of all forms of music - played proper instruments with virtuoso ability. Lyrics could be understood and the musical sound replicated - because it was written down and 'scored'. Actors, musicians, dancers, etc., all had 'great ability'.

Even in this milieu, some performers stood out as exceptional. When thoroughly competent TV directors and skilled television technicians were able to work with these outstanding performers, shows of exceptional quality and were produced.

Mary Tyler Moore had an ability and an aura about her that was rare. The 'situation comedy', a long cherished and much loved TV art-form, seemed to have been made for her and her many skills. Moore's first great TV success was in the Dick Van Dyke Show. Then, when she starred in her own shows, Moore was magnificent.

Importantly however, unlike the crass and peurile content of so much 'entertainment' today, the Mary Tyler Moore Show ( and other great shows of the era) contained no gratuitous violence, no explicit sex or nudity, and no foul or blasphemous language. The show was humourous without being coarse and was, truly, a delight to watch.

ServoReviewed in the United States on July 26, 2005
5.0 out of 5 stars
Fox Improves MTM Show Marketing Strategy!
Verified purchase
Given the three year timeframe between this set and the first one, there was much concern whether Fox would even release a season two DVD. The studio caught alot of heat from consumers over the high price tag of the season one set. However, Fox has apparently LISTENED to buyers, by not only releasing The Mary Tyler Moore Show - The Complete Second Season with the same splendid level of picture quality and quantity of extras as the first set, but this time at a reasonably affordable price at the time of its release!

If sales are good for this season two set, then Fox should release subsequent seasons (with the same quality packaging as the first two sets) with a better release timeframe between sets. Until then, enjoy yet another quality MTM Show season set filled with brilliant episodes and great extras!
4 people found this helpful
Report abuse

Joanna MReviewed in the United States on December 1, 2006
5.0 out of 5 stars
One of my all-time favorite sitcoms!
Verified purchase
Although the show ran throughout the '70s, its appeal is still lasting today, in the story of Mary Richards and her eclectic co-workers in the WJM newsroom...

In the pilot, 30-year-old Mary has just moved to Minneapolis, eager to start a new life as a single careerwoman after her breakup with her fiance. She answers an ad seeking a secretary, and finds herself associate producer of the six o'clock news at WJM. There, she works for Lou Grant, a tough guy with a soft exterior and a ready bottle of booze, and alongside kindhearted news writer Murray and self-centered, idiotic reporter Ted Baxter.

On the home front, Mary decides to rent an apartment in the home of her college friend Phyllis Lindstrom...incurring the wrath of New York native Rhoda Morgenstern, who had her heart set on moving in. Despite their rocky start, the two opposite personalities quickly become best friends, creating the basis for much of the show's humor.

If you've never seen this show, I urge you to give it a try! You'll soon be looking for the rest of the seasons.
6 people found this helpful
Report abuse

WidowedwalkerReviewed in the United States on July 27, 2005
5.0 out of 5 stars
"What happened here?"
Verified purchase
At first we were told that the second season of "Mary" was delayed by FOX due to poor sales of the slightly over-priced season 1--- but they know 35 year-old shows rarely fly-off the shelves like crazy.

Then the more-credible story ciruclated that FOX had internal political bickering over the costs of the extras for season 2 (including documentaries shot for each year, produced by Ed Asner and his son).

Now, season 2 is out, in all its glory, chock-full of extras... yet Miss Moore is mysteriously missing from the interview footage they shot in 2002--- even though she WAS interviewed (as is evidenced by the documentary for season 1) and everyone else in the cast appears, except for the late Ted Knight!

Anyway, a good Season 2 collection (and cheaper, this time!), although it includes a 1973 local Minneapolis documentary on the shooting of the new title-sequence which would have been more appropriate for the season 4 DVD release--- but, hey!, I'm not complaining.

And, yes, the moody-perspective shot of Mary walking down the street and looking up to her right (from the original theme design) that FOX has on their 'Mary' site would have been far better a box-cover for season 1 & 2 than what they used, but, what the heck... at least we've got finally 'em...
5 people found this helpful
Report abuse

April DReviewed in the United States on November 23, 2020
1.0 out of 5 stars
Not good
Verified purchase
So so so disappointed. Yes I read the reviews, but I hoped the discs would work for me since I love this show so much. Sadly every disc froze during at one part of the episodes. A really annoying factor is that you can't put the disc in a play through all the episodes on the disc. You have to select each episode separately, which is annoying. Sad sad
Report abuse

William G. RatcliffeReviewed in the United States on June 27, 2005
5.0 out of 5 stars
FINALLY!!
Verified purchase
After purchasing season 1, i was hoping season 2 would be under way. After a few years i almost gave up hope. Now, in July, season 2 will be available, and thank goodness! As Saturday night tv in the early to mid seventies included 'All In The Family' 'Bob Newhart' and 'The Carol Burnette Show", Mary Tyler Moore became a fixture, and an icon.

Despite releasing many tv shows that were luke-warm-received during it's first run, I am suprised that it took this long to release Mary's show (and only up to season 2) at that!

No other tv show at that time (1970's) had so many lovable, but different characters on one show, that at least one of us could identify with, and to be spun off numerously with good shows "Phyllis", "Rhoda" and "Lou Grant".

I know i'll have to wait for the episodes with Betty White, where her interplay with Lou Grant is priceless, but am happy that season 2, hopefully with the same high quality transfer that season 1 will be.

Thanks to Fox, I will again laugh at, and with, some of my 'friends', who when i was in my early teens gave me laughter at a time when it as cool to stay home and just 'chill' with the family.
9 people found this helpful
Report abuse

vintageboyReviewed in the United States on August 7, 2005
5.0 out of 5 stars
Finally, but where is the alternate opening?
Verified purchase
Finally, after nearly three years of waiting for this set, it's out! I was getting to think that it would never happen. Though the packaging is only slightly different then the first set, it's great to see all these episodes, restored, with pristine sound and color, on DVD. To compare these to the butchered, faded syndication prints which have been running for years, is like night and day.

The second season of the show has never been my favorite, and with the exception of a few episodes ("A Girl's Best Mother is Not Her Friend", "Some of My Best Friends are Rhoda", and "The Square-Shaped Room"), this is probably the least interesting season to me. I think things really started to pick up in the third year, as the characters became more developed and three-dimensional.

It's upsetting to think, that had Fox stayed on track, that we would probably be seeing the seventh and final season out, by the end of this year, but instead, we are only at season two. Hopefully this one sells, so that the other sets are soon to follow. And Fox, PLEASE get "Rhoda" out on DVD, A.S.A.P.!

Nice batch of extras on this set, though I agree in that the "Newsbeat" spoof, is a little too odd. My only real gripe with this set, as it is, is that there were two opening themes to the second season, and this set seems to have only one used for all the episodes. In the other version, a clip of Mary laughing from "Support Your Local Mother" is used instead of the clip of her and Phyllis. It's a minor thing, but I think that other clip was nicer in the opening.
7 people found this helpful
Report abuse
See all reviews
Back to top
Get to Know Us
Make Money with Us
Amazon Payment Products
Let Us Help You
EnglishChoose a language for shopping. United StatesChoose a country/region for shopping.
© 1996-2021, Amazon.com, Inc. or its affiliates