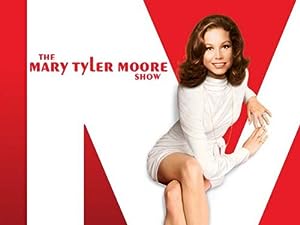 Tiddly TT WinksReviewed in the United States on May 15, 2013
4.0 out of 5 stars
Before Carrie and Sex in the City, there was Mary Richards - The Mary Tyler Moore Show
Verified purchase
Huge fan of the show - it's so cleverly written with some of the best TV characters ever. Having seen Seasons 1, 2, 5, and 6 - I was looking forward with great anticipation for this TV series, which was scored for 9.99 - not the all-time lowest price on Amazon, but a good price nonetheless. Item arrived quickly and packaged well - it's a normal-sized DVD case which holds 3 discs. Pretty simple format with no extra DVD features.

Compared to the prior seasons, and even the seasons thereafter, there seems to be a drop in the writing quality in many of the episodes. Also, there's some noticeable voice-over work on a few of the episodes (i.e. a few lines re-done in the studio). Overall, sound and image quality on the DVD transfer is good, and unlike the prior seasons' DVDs, you don't have to fish through multiple levels of menus to play an episode and then move onto the next.

Perhaps the stand-out star from the cast -- even with a drop in scriptwriting quality -- is Valerie Harper (Rhoda). The episode where she describes her vision for the Christmas window decorations for the department store has got to be one of the best examples of physical comedy. It's a good season to have in the movie library -- not my favorite season -- but a solid addition. Looking forward to seeing Season 4, whenever the price drops to a fair price again :)

E. S.Reviewed in the United States on June 17, 2015
3.0 out of 5 stars
Sloppy Cheap Job of Packaging
Verified purchase
The reason for just three stars is not for the shows themselves, so, it was difficult to know how to rate this. The negative is that this was a replacement for the Season Three I received when I purchased the complete series, and in that, Season Three had three discs in it, two of which were the same. So I requested and received this stand-alone Season Three. On to the negatives.....
The Season Three that comes in the complete series set has inserts for all three discs which keeps them safe. But, the replacement stand-alone Season Three has all three discs piled on top of each other with no inserts for them. Go figure. Two plastic prongs were broken and the discs spilled out in shipping. Unfortunately, seems one can only get good quality by ordering the entire series, although even then, we did have that problem with Season Three in the complete series set and two of the same discs. Hope that's clear.
2 people found this helpful
Report abuse

Roy AndersonReviewed in the United States on November 5, 2006
5.0 out of 5 stars
Moore of the same, please!
Verified purchase
In the golden years of Television - indeed in the golden years of Entertainment - quality was important. Performers on TV had honed their skills, during years of endeavour in halls and theatres across the country, perfecting their work. Musicians - of all forms of music - played proper instruments with virtuoso ability. Lyrics could be understood and the musical sound replicated - because it was written down and 'scored'. Actors, musicians, dancers, etc., all had 'great ability'.

Even in this milieu, some performers stood out as exceptional. When thoroughly competent TV directors and skilled television technicians were able to work with these outstanding performers, shows of exceptional quality and were produced.

Mary Tyler Moore had an ability and an aura about her that was rare. The 'situation comedy', a long cherished and much loved TV art-form, seemed to have been made for her and her many skills. Moore's first great TV success was in the Dick Van Dyke Show. Then, when she starred in her own shows, Moore was magnificent.

Importantly however, unlike the crass and peurile content of so much 'entertainment' today, the Mary Tyler Moore Show ( and other great shows of the era) contained no gratuitous violence, no explicit sex or nudity, and no foul or blasphemous language. The show was humourous without being coarse and was, truly, a delight to watch.
2 people found this helpful
Report abuse

Philip S. MannReviewed in the United States on April 21, 2009
4.0 out of 5 stars
More (Moore?) of that 70's period of sitcom excellence.
Verified purchase
There was a time where people had a reason to stay home on a Saturday night, and in that time (1970 to 1977), CBS had a prime time lineup starting with All in the Family, M*A*S*H, MTM, and the original Bob Newhart Show. Created by "Your Show of Shows" veterans like Norman Lear, Larry Gelbart, James L. Brooks (pre-Taxi), and Grant Tinker respectively.
I will speak here about the Mary Tyler Moore show. A perfect oasis of great writing (Who uses words like "rotten" now?), and great acting, and a perfect ensemble, not to be matched until Brooks' "Taxi", and "The Simpsons" after that. James L. Brooks has always excelled in comedy based on real character, and how said characters interact. Who can forget the unbreakable group hug in Mary's final show? At this writing, only the first four seasons of MTM are available on DVD. The clarity of the video makes the show look more handsome than ever. The acting, particularly that of Edward Asner and Ted Knight, is top-notch. In the third and fourth season, we meet new characters like Sue Ann Nivens (Betty White), and Georgette Franklin (Georgia Engel) Seeing these two in their prime defies describing how sweet that is. The only reason I didn't give five stars to seasons 3 and 4, was the lack of special features; commentaries, interviews and the like. We need the input of directors like Jay Sandrich, and writers like David Lloyd, who wrote the sixth season classic, "Chuckles Bites The Dust". Until the sixth season is released, the best available episode is season 3's "It's Not Whether You Win or Lose", where the WJM crew are snowed in, and a poker game happens where Murray loses much money (we learn that Murray is a compulsive gambler in this episode), and to get it back, he wagers Ted double or nothing that he will not pronoune the name, Ideko Kawasaki properly. This is what good, laugh out loud, character comedy is all about. Oh, and don't forget to check out season 4's "Better late (that's a pun) Than Never", where Mary and Rhoda are up late doing obituaries, and they got both funny and creative on one obituary that had to be used before it could be changed. The Mary Tyler Moore Show is a program that every serious student of comedy needs to study, and eventually own. ILFT having all 7 seasons.
You will, too. Meow.
One person found this helpful
Report abuse

Joanna MReviewed in the United States on December 1, 2006
5.0 out of 5 stars
One of my all-time favorite sitcoms!
Verified purchase
Although the show ran throughout the '70s, its appeal is still lasting today, in the story of Mary Richards and her eclectic co-workers in the WJM newsroom...

In the pilot, 30-year-old Mary has just moved to Minneapolis, eager to start a new life as a single careerwoman after her breakup with her fiance. She answers an ad seeking a secretary, and finds herself associate producer of the six o'clock news at WJM. There, she works for Lou Grant, a tough guy with a soft exterior and a ready bottle of booze, and alongside kindhearted news writer Murray and self-centered, idiotic reporter Ted Baxter.

On the home front, Mary decides to rent an apartment in the home of her college friend Phyllis Lindstrom...incurring the wrath of New York native Rhoda Morgenstern, who had her heart set on moving in. Despite their rocky start, the two opposite personalities quickly become best friends, creating the basis for much of the show's humor.

If you've never seen this show, I urge you to give it a try! You'll soon be looking for the rest of the seasons.
Report abuse

A. SprankReviewed in the United States on November 30, 2017
4.0 out of 5 stars
Good DVD, but for one thing.
Verified purchase
Good quality DVD, episodes appear uncut, there is a nice "episode guide" inside cover so you don't have to guess what you're watching. My only beef is that there is NO continuous play, you have to manually request every episode, what is up with that? Tried to watch while I was sick one day, and it drove me crazy having to sit up and focus to change for each episode. The series was so good, I guess you're supposed to overlook what a pain this can be! Which is the reason for the 4 stars, it is NO reflection on the show itself.
One person found this helpful
Report abuse

leslie eckhardtReviewed in the United States on March 24, 2014
5.0 out of 5 stars
A True Classic
Verified purchase
I watched this series from the moment it premiered back in 1970. The show was and is one of the best series of all-time. Great cast, great writing and great direction. This was a Saturday night tradition back in the day. Following the series from the start, one can see how the characters develop and grow throughout it's run. So many classic moments in each season, too. They don't make shows or actors this good anymore. Season 3 has several episodes which can be considered classic. The episode where Rhoda loses weight and enters a beauty contest, the one where Mary has to appear at an awards function and looks less-than-beautiful, and the one where Phyllis's brother visits are some of these. You really can't go wrong with any of the season sets from this series. They're all winners.
One person found this helpful
Report abuse

Tamra J. GibsonReviewed in the United States on February 25, 2007
5.0 out of 5 stars
I'LL TAKE RHODA ANY WAY I CAN GET HER!!!!!!!
Verified purchase
I have to admit that I bought the MaryTylerMoore show because I simply adore Valerie Harper as Rhoda! She absolutely stole every scene she was in and was the perfect gal pal for Mary. I'm so glad I started with purchasing season 3, considering MaryTylerMooore looked so much better with her hair cut shorter, the storylines were alot funnier, and Rhoda was finally set free from the dowdy plain jane look to a sensational chic beauty of the 1970's!!!

The MaryTylerMoore show set the standard of a truly great sitcom, which included a great cast (Loved Phyliss, Murray, and Georgette!), solid writing, and Rhoda!!! I just loved her colorful apartment, fashion style, and quick wit!!! I hope the executives in charge of dvd releases at Fox wise up and release the remaining seasons of the MTM show and bring out Rhoda!!! I wonder if Twentieth Century Fox realizes there are web sites selling bootleg copies of the complete series of Rhoda, MTM, and many other shows? Probably not, but I'll just wait in vain for the shows to become available on the open market, considering it's the safest way to purchase directly from retailers and Amazon!!!
One person found this helpful
Report abuse
See all reviews
Back to top
Get to Know Us
Make Money with Us
Amazon Payment Products
Let Us Help You
EnglishChoose a language for shopping. United StatesChoose a country/region for shopping.
© 1996-2021, Amazon.com, Inc. or its affiliates