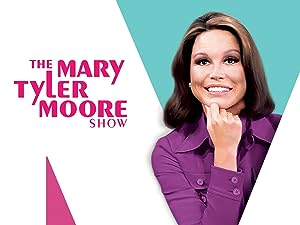 (476)8.11975TV-PG
From the love and laughter of Mary's dinner parties to the chaos and camaraderie of the WJM-TV newsroom, The Mary Tyler Moore Show will always be known as the groundbreaking sit-com that turned the world on with a smile. Don't miss out on Season 5! Love is all around in this Emmy Award-winning classic, one of the best--and best loved--television shows of all time.

ashley switzerReviewed in the United States on January 4, 2018
5.0 out of 5 stars
Watch MTM with my grandma in the70s
Verified purchase
I used to watch Mary Tyler Moore with my grandmother as a child in the 70s. Grandma passed away on November 17, 2017. She battled Alzheimer's Disease for three long years. Her short term memory was all but gone but her long term memory was mostly intact. When she was having a rough day I would pop in one of my Mary Tyler Moore discs and you could see her eyes light up. She didn't always understand the episodes but she remembered Mary. Those are memories I will have forever.
7 people found this helpful

J. MillsReviewed in the United States on April 2, 2021
1.0 out of 5 stars
My Recommendation for You? Borrow them from the Library first...
Verified purchase
Lacking the spark of the other seasons, to me. Gordy was gone; which was always gonna' be a negative. For me, the more 'agenda-promoting' the story got the less funny and compelling it became. For me, it was a chore to get through these final three seasons.

I'm not even going to sell them; straight to the rubbish pile they're going.

Mark Baker - Carstairs ConsidersReviewed in the United States on October 16, 2009
4.0 out of 5 stars
"What Did You Think, Mr. Grant?" "It Didn't Stink."
Verified purchase
It's always with a little sadness that I approach season 5 of this great show. One of the things I love about the early seasons of the show is the great friendship between Mary and Rhoda. And with Rhoda gone, I feel the show is missing a little something. Fortunately, the other cast members step it up and that feeling doesn't last for more than an episode or two.

The joy of a good ensemble comedy is the fact that you do have good strong characters to build upon. Mary Richards (Mary Tyler Moore) is still living in her one room apartment next to neighbor Phyllis (Cloris Leachman, who only has four episodes this season). Her work life seems to overtake more of her personal life. For example, boss Lou Grant (Ed Asner) moves into Rhoda's old apartment at one point. Ted's (Ted Knight) girlfriend Georgette (Georgia Engel) stops by to visit on a more regular basis. Heck, even happy homemaker Sue Ann (Betty White) shows up quite a bit more. And good ole Murray (Gavin MacLeod) is by Mary's side every day at work.

As with the previous seasons, this show features some classic episodes. My favorite is "Not a Christmas Story," which finds the gang snowed in and mad at each other. Absolutely hilarious stuff. Lou turns into a softy after he throws Ted through a door. Murray struggles with his feelings about only having daughters. Mary gets a promotion to producer and tries to go it alone with the news. Sue Ann almost gets replaced by a much younger fan. Phyllis tries to find a job after a bad economy destroys the family budget. And in another favorite, Ted finally asks Georgette to marry him, in the middle of the 6 o'clock news.

Even when this show gets serious, like the season opener with finds Mary facing jail time for not revealing a source, it never forgets it is a comedy. There are plenty of laughs.

Of course, the writing and the acting are all top notch here. You couldn't ask for a better cast, and they truly bring these characters to life.

As other have noted, the big drawback to the set is the packaging itself. The shows are on 3 discs. They could look a little better, but I don't think they are any worse than the other seasons have been. We get no extras, but we didn't for the last two seasons. What is unforgivable is no episode guide. How can I find my favorite episode without it? True, I can look it up on line, but that's annoying. Additionally, they cut out the disclaimer voice over from "The System," one of my favorite bits from that episode.

So the set itself loses a star. But the episodes are still timeless and funny. Since this is probably the best we will ever get, if you are a fan, get this set. You will certainly enjoy the core content.
10 people found this helpful

Joe AlbaneseReviewed in the United States on April 7, 2008
5.0 out of 5 stars
Season 5
Verified purchase
It was 1974 and I had just worked one full year. I had a vacation coming and I flew to California (first vacation/ first time in a plane) because I wanted to watch them tape THE MARY TYLER MOORE SHOW. I was told this might not be possible but . . .

On the evening of Friday, August 16th, I was sitting in the studio audience when they taped the episode where, with the excuse of buying a piano, Murray contemplated having an affair with Barbara Barrie. I saw it all - the apartment, Mr. Grant's office, etc. Even now (30 + years later), I will never forget that night. So PLEASE RUSH OUT THAT DVD (and the subsequent years). Many years later, Mary Tyler Moore appeared at Borders here in NYC to autograph copies of her book, AFTER ALL. I waited in line and just as I got to her, her pen ran out of ink and I got a few moments to speak to her. I told her how I had been listening to the radio that morning where the DJ's were kidding her about seeing her for the first time on TV LAND and NICK AT NIGHT. I told her how I had gone all the way to California to see her tape an episode of the show. "Really?" she smiled (Oh, THAT SMILE). "You must be a real fan." I told her I kept the ticket (framed) and told her the date and what the episode was about. She really laughed and said, "Boy. You are even a bigger fan than Rosie O'Donnell!" My shining moment.

How many shows or personalities can have this effect on so many people? Well, this show has and as I've almost worn out the DVD's from the first four seasons, I can not wait until I get my hands on this one. Hey. Amazon. Can we pre-order?
10 people found this helpful

John RobinsonReviewed in the United States on October 15, 2009
4.0 out of 5 stars
Show glows, packaging bloze
Verified purchase
The episodes themselves get 5 stars: the writing, directing, acting, timing, etc. all top-notch and laff-out-loud funny. The picture clarity gets another 5 stars and so does the audio and the price! But let's face it, we know why the price is reasonable: 20th Century Fox seems to have released this with the attitude, "LET'S JUST RELEASE THIS AND GET IT OUT TO SHUT THESE PEOPLE UP!" Therefore, it's totally bare-bones...no episode listing, no show info, no promos, no trailers, no commentaries, not even ad inserts! No nuttin' except the episodes. It's a friggin' shame, because the episodes in this season make me laff out loud...Ted Knight really lets his Baxter-isms fly and Mary is at her total babe-ness. So even though it didn't get the proper respect & release treatment, you will still totally enjoy these shows and try to forget the packaging flaws.
6 people found this helpful

Wolfee1Reviewed in the United States on May 30, 2011
5.0 out of 5 stars
AWARD WINNING SHOWS!
Verified purchase
On the Fifth Season our Gang from WJM-TV continues to make us laugh with 24 New Episodes, it seems like they get better every year. The Mary Tyler Moore Show are well stablish by now and winning Awards everywhere, countless Emmys and is been noted as, and I Quote: "one of the most acclaimed Television programs ever Produced in US Television History", some of Mary's neighbors moved out, but there's so much more going on, that you don't even have time to miss them. The DVDs still looks Crystal Clear, However, I noticed right away the Cheap Packaging, What Happened? SuCh a drop in Quality, not even any descriptions of the Episode Titles, I guess Fox need it to cut corners, I wanted to give it 1 Star because of all this, but it would not be fair to Mary and her Wonderful Group of Actors, they are the Best! Thank You
2 people found this helpful

Doc SavageReviewed in the United States on May 31, 2019
5.0 out of 5 stars
Mary Tyler Moore S 5
Verified purchase
I like the characters in this show. Obviously solid, and good characterizations since about every single actor went on as a spinoff show. Many of them didn't last, because the right formula was all connected in the writing and production of the original...Mary Tyler Moore show. Instant classic hit that came around at the right time. No problems with the DVD.

VinnyReviewed in the United States on November 5, 2008
5.0 out of 5 stars
One of the Best Sitcoms of All Time
Verified purchase
We are all waiting with bated breath for the remaining seasons of the show to come out on DVD. It's sad to think of all the garbage that is out on DVD but we must wait this long to complete the set of the MTM show. PLEASE GIVE RESPECT TO THE SHOW AND ONLY RELEASE SINGLE SIDED DVDs. Double sided DVDs seem to always have problems i.e. Law & Order from season two on have poor playback quality. The Mary Tyler Moore Show is still very funny and reflects the changing times of the 1970's. The show's humor still works today because though some of the topics were new in the seventies they still hold up today. All in the Family was very funny at the time but the humor doesn't always hold up now because that show was very political, very anti-President Nixon and many will not get the jokes unless you lived in those days.
See all reviews
Back to top
Get to Know Us
Make Money with Us
Amazon Payment Products
Let Us Help You
EnglishChoose a language for shopping. United StatesChoose a country/region for shopping.
© 1996-2021, Amazon.com, Inc. or its affiliates