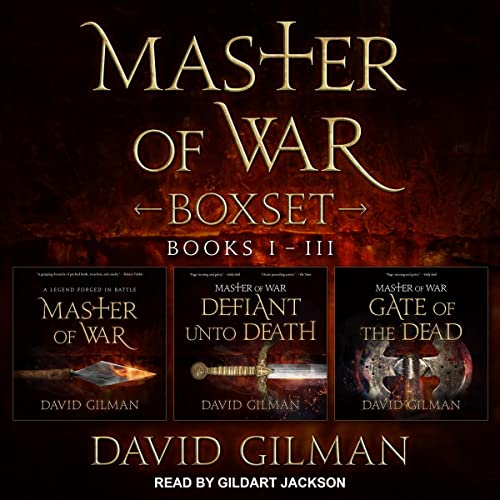 Amid the carnage of the 100 Years War - the bloodiest conflict in medieval history - a young English archer confronts his destiny....

England, 1346: For Thomas Blackstone, the choice is easy - dance on the end of a rope for a murder he did not commit, or take up his war bow and join the king's invasion.

As he fights his way across northern France, Blackstone learns the brutal lessons of war - from the terror and confusion of his first taste of combat, to the savage realities of siege warfare.

Blackstone will brave the terrors of the High Alps in winter, face the Black Prince in tournament, confront the bloody anarchy of a popular revolt, and emerge from the Battle of Crecy as a knight.

He may yet defy death but he can't defy his destiny: Master of War.

Collected in a single volume for the first time, the first three novels in the epic Master of War series, comprising of: Master of War, Defiant unto Death, and Gate of the Dead.

pjburn
4.0 out of 5 stars Like medieval warfare? Like a love story?
Reviewed in the United States 🇺🇸 on January 9, 2018
Verified Purchase
If so, then this story may be for you. As the story unfolded set in 14th Century’s Hundred Years War between England and France, we have portrayals of battle scenes second to none. We have a blooming love between Thomas Blackstone and Christiana, he a commoner and her the daughter of a minor noble, an Englishman and a French woman. Was it mentioned that there were great battle scenes, close in-fighting and long-range deadly archery? Over and over as the setting shifts from Normandy to Italy to England and then to Meaux (east of Paris), we find ourselves at the battles of Crecy and Poitiers, great English victories, then campaigning as condottieri for Florence against the Milanese, then at a great medieval tournament back in England, and a final rush to save French families and rescue his own wife, daughter, son, and make a decision to accept a bastard son borne by Christiana following her rape. Of course there a magnificent friends and allies for Blackstone, and deadly plotters and assassins stalking the man with the price on his head. Heroism, sacrifice, clever plots, fierce loyalty, and always hair-raising danger mixed with the sweet sauciness of Christiana and the strong bonds between the men who ride with the Wolf Sword. Gillman is a fine prose writer creating time, place, culture, dress, medicine, warfare, etc., within the frame of the cruelty of that long war.
Read more
2 people found this helpful
Helpful
Report abuse

Charles Kovacs
VINE VOICE
5.0 out of 5 stars I was not disappointed. The author has done his research
Reviewed in the United States 🇺🇸 on March 30, 2018
Verified Purchase
I bought this three volume set after reading the free sample sent to my Kindle. Although at the first glance it seemed to be just another peasant to noble military success story, the details and the quality of writing made it promising. I was not disappointed. The author has done his research, and the story takes place in an authentically depicted Western Europe of the XIV Century. This is not just about Crecy and Poitiers, but the decades in between, and about life and politics of France, and especially Normandy. The plot then moves to Northern Italy, again one learns much, amidst much action and fighting, coming to a dramatic ending in England.
The books in this series are not military history, but historical novels, albeit with lots of blood and gore, perhaps even too much. There is also a song romantic strand within the overall story, sex is mentioned but hardly ever described. The protagonist's progress sometimes seems on the miraculous side, but not often. I rated this set at five stars as a set of historical novels that could be enjoyed by any reader interested in this genre.
Read more
2 people found this helpful
Helpful
Report abuse

Kurt Jørgensen
5.0 out of 5 stars Europe in Turmaoil
Reviewed in the United States 🇺🇸 on April 1, 2018
Verified Purchase
In the series we follow Thomas Blackstone, a young English stonemason during the 100 years wars between England and France. Thomas and his mute brother are enrolled in the army as archers and take part in the battle of Crecy. His brother is killed and Thomas himself nearly dies of wounds.
He is knighted and nursed back to life in a Norman's castle. He learns to become a swordsman and leads a group of men in the ongoing wars. He marries and takes part in the battle of Poitiers in 1356, and then he and his men take a job as mercenaries in the Italien wars between Florens and Milan. In 1358 he is called back to London and sent back to France on the King's orders to help conquer the French crown. Hiswife and daughter are murdered and Thomas disappeares ....
Don't worry. The series continues, and I have just starter Viper's Blood starting in 1360 with Thomas an his men taking part in the attempt to take Rheims.
Read more
One person found this helpful
Helpful
Report abuse

Amazon Customer
5.0 out of 5 stars Wonderful & Gripping with Excitement
Reviewed in the United States 🇺🇸 on January 4, 2018
Verified Purchase
I barely remembered reading the first book and yet when I seen the box set offered, I had to check it out. To do so, I searched out the title of the first book in my Amazon's "Content and Devices." Since I have created a series of "Collections" on my Kindle, my search informed me that
the first book in this series had been entered into several of my 'Collections" ; Historical fiction, Novels read, Series to consider, Novels to recommend, and Favorites. So, without further thought I purchased the box set and thank goodness it was being offered at a special price. Because I after finishing it I purchased the 4th and 5th books of the series.

I am truly hooked, on the excitement, the characters, and the intrigue!
Read more
2 people found this helpful
Helpful
Report abuse

Antonio Maisonet
4.0 out of 5 stars Great storyline
Reviewed in the United States 🇺🇸 on August 25, 2020
Verified Purchase
This series puts the reader back into a turbulent time and truly makes you feel it! The characters have so much personality you really get to know them.
Read more
Helpful
Report abuse

Nathan Detroit
4.0 out of 5 stars Great historical fiction
Reviewed in the United States 🇺🇸 on July 18, 2019
Verified Purchase
If you are a fan of Bernard Cornwell, you should like this. Good adventure which holds the readers interest page after page. It gives a glimpse into what life was like for the common folk back in those days and it isn't pretty. I am looking forward to reading the next books in the series.
Read more
Helpful
Report abuse

Daniel F. Egbers
4.0 out of 5 stars Books Two and Three repeat the first to the point of tedium.
Reviewed in the United States 🇺🇸 on September 16, 2018
Verified Purchase
I really enjoyed the first book in the series; the second, less well; the third least of all. The second and third books repeated the material from the first, almost to the point that I wanted to skip ahead to find where the plot would advance. For example: how many times is it really necessary to mention that the protagonist has a scar on his face?
Read more
2 people found this helpful
Helpful
Report abuse

jadeshand
5.0 out of 5 stars The final book
Reviewed in the United States 🇺🇸 on October 8, 2020
Verified Purchase
The final book in this trilogy was fantastic. Gut-wrenching ending that caught me completely by surprise. Excellent writing. Gilman did a marvelous job. I enjoyed the first two novels, but this last one, Book 3, was a masterpiece.
Read more
Helpful
Report abuse
See all reviews

Amazon Customer
5.0 out of 5 stars Mile a minute read, real page turners
Reviewed in the United Kingdom 🇬🇧 on November 30, 2021
Verified Purchase
I liked the historical setting, it is an exciting and thrilling series of books. I had read them in paperback and wanted my own copies so bought them as ebooks as good price and am looking forward to re-reading them over Christmas. For anyone who likes novels set in that period I can thoroughly recommend this series as it has everything. I am just hoping there will be another in the series soon.
Read more
Report abuse

Nick
5.0 out of 5 stars Outstanding writing
Reviewed in the United Kingdom 🇬🇧 on August 20, 2018
Verified Purchase
Other than the use of fire for the action of loosing a bow which, to be honest, was probably left in the passages by mistake by the proofreaders this was amazing. The characters are real, very real, and very different from each other, no one dimensional goodie/baddie nonsense here, real emotion, real action and real relationships. The feelings and actions of the protagonists were fantastically well depicted with an amazing empathy of the period. I would put these up there with Cornwell, with no issues at all, well done Mr Gilman
Read more
One person found this helpful
Report abuse

The Jannie
5.0 out of 5 stars Now I've got to find more by David Gilman!
Reviewed in the United Kingdom 🇬🇧 on January 10, 2018
Verified Purchase
I'm a sucker for a bit of historical savagery, so this set fitted well. As with Bernard Cornwell, there is a nice blend of fact and fiction, making the whole more believable.The overt baddies are really bad, while the hidden baddies are just as bad but are well camouflaged until the right moment. These were enjoyable reads and, rarely these days, mostly free of bad scannings and typos. Highly recommended!
Read more
One person found this helpful
Report abuse

RCS
5.0 out of 5 stars Master of War
Reviewed in the United Kingdom 🇬🇧 on January 20, 2018
Verified Purchase
Have binge read the first three books. An historical writer who has researched his topic throughly and coupled this with a broad range of captivating characters. This is historical fiction at its addictive best.
Read more
Report abuse