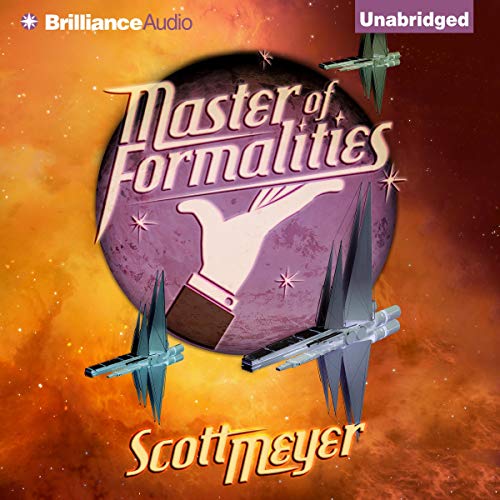 Even when finding oneself engaged in interstellar war, good form must be observed. Our story is set thousands of years after the Terran Exodus, where two powerful, planet-dominating families - the elegant House Jakabitus and the less refined Hahn Empire - have reached a critical point in their generations-long war. Master Hennik, the Hahn ruler's only son, has been captured, and the disposition of his internment may represent a last and welcome chance for peace.

Enter Wollard, the impeccably distinguished and impossibly correct Master of Formalities for House Jakabitus. When he suggests that Master Hennik be taken in as a ward of the House, certain complications arise. Wollard believes utterly and devotedly in adhering to rules and good etiquette. But how does one inform the ruler of a planet that you are claiming his son as your own - and still create enough goodwill to deescalate an intergalactic war?

Your audiobook is waiting!
Learn more about membership
List Price: $30.09
You Save: $15.10 (50%)
By completing your purchase, you agree to Audible’s Conditions Of Use
Sold and delivered by Audible, an Amazon company
Share

Georgia Shopper
VINE VOICE
4.0 out of 5 stars A worthwhile read
Reviewed in the United States 🇺🇸 on January 4, 2016
Verified Purchase
Good book, but I rate it a solid 4 stars. I agree with other reviewers who said that Meyer kept setting up the jokes and then failing to follow through on them. I think this could have been a VERY funny book, but I think Scott Meyer was trying to broaden his scope beyond his usual humorous offerings. It's not a bad story, but it is extremely slow in spots. It's a story of the ruling class of a future world and the class of masters of formalities, who advise them to do what's correct and proper in all circumstances. There's a war that's lasted hundreds of years between two powerful families. and it goes from there... There are several incidents that might have been very funny, but were handled a bit dryly so they were less so. The Hahn world food was certainly full of potential laughs, and the "sports" matches had so many opportunities for laughs. Even the side arc of Gint constantly dying should've have been funny, but it ended up feeling tragic instead. Likewise with Hennik's sports maneuver... Should have been funny, but instead I ended up feeling sad for Rayzo. Needed more of Scott Meyer's wittiness from his "Wizard" books and his Web comic. Still worth a read, but don't expect a lot of laughs.The first few chapters are very slow, but once you learn who the characters are, and get a feel for the setting, it does pick up. I started it and put it down several times before I really got going with it.
Read more
4 people found this helpful
Helpful
Report abuse

Kindle Customer
5.0 out of 5 stars A slow start but well worth it
Reviewed in the United States 🇺🇸 on October 8, 2015
Verified Purchase
The humor in this book isn't for everyone, but it was certainly for me. It depended on mockery of conventions, especially the ones in the future society (s) created by the author, and there was also an almost slapstick quality to it at times. I got the audio version of the book without having ever read any of the author's other books, and started listening it to it on a long drive. I barely noticed the last three states I drove through because the book was so entertaining (and the narrator of the audio version so terrific), and when the drive ended, I got the Kindle version so I could read the rest of it faster!

The author created several different societies in a far-distant future, and then had the characters playing off each other in hilarious ways. There was a classic villain you love to hate and an assortment of other main characters who were variously regal, callow, touching, subtle, and on and on -- the characterizations were widely varied and often approached caricatures, but they were so well drawn to represent the various social structures they operated within that any tendency towards caricature ultimately made sense while adding to future (or occasionally immediate) situations, usually humorous.

The humor built very slowly, however, so those who want an Immediate laugh will be disappointed. But if you like quirky humor that is built on increasingly complicated situations created by characters working at total cross-purposes, you will love the book as much as I did. I hope the author revisits this universe in the future!

Now I need to read everything else the author has written!
Read more
2 people found this helpful
Helpful
Report abuse

Dana L
5.0 out of 5 stars Meyer Hits His True Form
Reviewed in the United States 🇺🇸 on September 13, 2015
Verified Purchase
I was a fan of the Magic 2.0 series, but after three books the premise may have started to wear a bit thin (there's really only so much you can do with that universe). So I was excited to see that Scott Meyer released a new book in an entirely different fictional universe. In my opinion, this book show's Meyer's brilliance in its true form. It may be my favorite read so far this year.

Master of Formalities is a Science Fiction novel, but the futuristic setting is actually secondary to the satire. Meyer manages to create a universe that is riddled with absurdity, which he manages to exploit to fullest effect. The main character (Wollard) is a bureaucrat, who manages to come across as both likable and stuffy (a difficult balance to strike). I'll admit that in the beginning I wanted to sock him in the mouth, but by the end I found myself pulling for him.

The other characters were also brilliantly rendered. In particular, I found Rayzo and Hennik to be particularly amusing. The other thing that I found interesting was that a few of the main characters experienced significant growth by the end of the story. In Magic 2.0, I found the characters to be secondary to the setting. In this novel, it was the other way around.

With the way that the story ended (not on a cliffhanger), I'm guessing that there will be a sequel or two. Regardless, I'm looking to read more by this author.
Read more
2 people found this helpful
Helpful
Report abuse

Soar
4.0 out of 5 stars puzzling but enjoyable experience
Reviewed in the United States 🇺🇸 on July 22, 2015
Verified Purchase
Like an exotic dish with spices I have not experienced before, I wasn't sure if I liked or disliked this book while reading it.

I thought the universe Mr. Meyer set this story in was very interesting, but at times I felt like there was a lack of depth to the characters and their actions/reactions in the story. And then, when I was getting annoyed at the story, I would wonder if there was more of an underlying message (similar to the Gulliver's Travels book) that I wasn't astute enough to get. For this book felt like one big satire on current society.

There were points in the book I was banking my head against my kindle (ebook) thinking, "come on that is so obvious!", or "nobody is that blind!"... and then loving some other parts.

Regardless, I couldn't put the silly thing down. I'm pretty sure I liked it. His writing is always a fun journey for me.
Read more
Helpful
Report abuse
See all reviews

PT
4.0 out of 5 stars I didn't think I'd like it but I did.
Reviewed in the United Kingdom 🇬🇧 on January 30, 2022
Verified Purchase
Without going into details, I did enjoy this. The characters and the story are all solid and there is enough intrigue to carry a series.

My one real minus star moment though was the handling of the minor characters. Some of them go through very traumatic events and their arcs in this novel are ended with neat little bows. It just felt 'cheap'.

Saying that, I would recommend this.
Read more
Report abuse

Born Ready
4.0 out of 5 stars Quirky, very quirky...
Reviewed in the United Kingdom 🇬🇧 on December 7, 2021
Verified Purchase
.... but what an enjoyable read. Where did Scott get this idea? It may not be everbody's cup of tea but I couldn't put it down. There is a hint of a sequel at the finish ('Migg') but I personally would love to hear more about Shimlish the Pig and whether she gets to be Queen?
Read more
Report abuse

Mkc
5.0 out of 5 stars Diplomats in a dysfunctional family scifi saga
Reviewed in the United Kingdom 🇬🇧 on January 12, 2020
Verified Purchase
Another brilliant humourous read from Scott Meyer. Without giving the plot or twist away, throw into a pot the point of view of a Blackadder (3rd) like perspective into a Dune like future with great houses trying to maintain the ethos of Star Trek (the ones before JJ or Discovery turned it into Star Wars) with some Hunger Games for topping and what you get is this, "Wollard, A Butlers Tale and Other Things", I mean "Master of Formalities". Great enjoyable light reading as a distraction.
Read more
Report abuse

MR David TW Hughes
5.0 out of 5 stars Pure Scott Meyer... And so much more.
Reviewed in the United Kingdom 🇬🇧 on May 4, 2018
Verified Purchase
I have read Scott's work from Basic Instructions through the wizard series to this new long form novel, and each creative endeavour he tries just makes him a better writer.

This book is spectacular. Pure Meyer wit but imbued with more spirit and character development than I've ever seen from him. Master of Formalities has shades of the great Iain M Banks but is undoubtedly a Scott Meter tale, exploring the character as well as the circumstances that develop and change people. It's a masterclass in politics as well. Very well done, sir.
Read more
Report abuse

B. Siviter
5.0 out of 5 stars An original and delightful piece of space opera.
Reviewed in the United Kingdom 🇬🇧 on January 6, 2020
Verified Purchase
I read this purely as a result of the fun I had reading the Wizard series. I was hoping for similar fun and entertainment.
Scott has created an interesting universe with heroes and villains. And of course there is the kitchen. Read and enjoy.
Read more
Report abuse
See all reviews