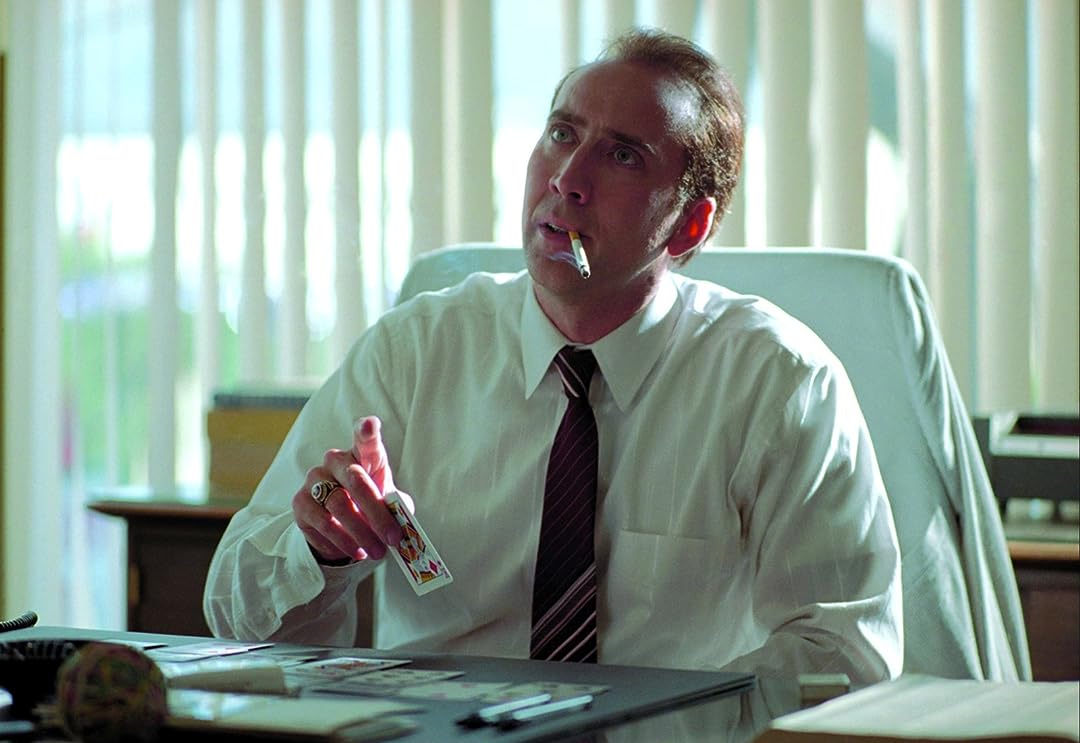 (1,382)
7.31 h 56 min2003X-RayPG-13
Nicolas Cage stars as a con man with an obsessive-compulsive disorder whose orderly life and latest scam are threatened by the reappearance of a teenage daughter he never knew existed.

joel wingReviewed in the United States on August 11, 2021
4.0 out of 5 stars
One of my fav Nicholas Cage roles about conmen and family bonding
Verified purchase
The first rule of a conman is never to trust anyone. Nicholas Cage, his partner Sam Rockwell, and his newfound daughter Alison Lohman set off on one of their greatest cons. It’s also how Cage and Lohman bond. It’s so cute when he teaches her his trade by scamming an old lady! He also has all kinds of phobias and twitches and his little breakdowns are a sight to see. The ending is special as well. This might be my favorite Cage part because he plays such an oddball.

Anthony MitchellReviewed in the United States on February 25, 2016
5.0 out of 5 stars
Nice, Classy Film
Verified purchase
This is one film I think is greatly underrated. Nicholas cage plays Roy- a conman who lives alone and fears the outside world in just about every way, including having a life. He finds out that he has a 14-year-old daughter and decides to meet her. Their bond brings him out of his reclusive ways to a point and Roy discovers a lot of things bout himself and his new little family. Sam Rockwell plays his wise ass, but sympathetic partner, Frank.

I really like the feel of this film. It's soundtrack features Sinatra and other smooth tunes that I enjoyed a lot. This is not a pulse-pounder or adrenaline junkie film, but there are a few tense moments. It's more about Roy's own conscience driving him to be a better man, although he definitely needs help in getting there.

I really enjoy this film more and more every time I watch it. If you're a fan of crime movies and like a comedic twist to the story along with good character development, this film is definitely for you. Included is a nice little "making of" featurette.

Amazon CustomerReviewed in the United States on September 28, 2019
2.0 out of 5 stars
Not bad
Verified purchase
Only redeeming thing about this movie is the ending. This is a good representation of the saying "there is no honor among thieves". I have to say that the character Roy took things well. He was at least honest enough to apply the same rationalization to himself as he did his victims. He didn't take money from people...they gave it to him. This movie left me feeling angry at the characters. I would not have been so charitable to that little B even a year later.
One person found this helpful

Cindy FankhanelReviewed in the United States on May 26, 2020
5.0 out of 5 stars
Awesome movie if you are in Abnormal Psychology and want to better understand what true OCD is..
Verified purchase
This was suggested by our instructor as a good overall look at what OCD truly is about...it is riveting and when in my MAC program while studying I watched it again. It truly is poignant, it is not for children. It is too intense. It is well acted and extremely well researched before the screenplay was written. Thumbs Up!
One person found this helpful

NobileeReviewed in the United States on November 16, 2021
5.0 out of 5 stars
Such a great movie!
Verified purchase
I love everything about this movie. Nicolas Cage is one of my favorites and he’s funny and endearing as ever in this! All the characters are engaging and the acting is just marvelous. Matchstick Men has a unique storyline with twists and turns, suspense and a few surprises towards the end! I give it two 👍👍

BrettReviewed in the United States on August 3, 2012
5.0 out of 5 stars
Underrated
Verified purchase
Movies about con-men are difficult to pull off. The best ones, in my opinion, are The Sting, Reservoir Dogs, Catch Me If You Can, Spanish Prisoner (Steve Martin is exceptional), and yet another Steve Martin flick, Dirty Rotten Scoundrels. Add to this the wonderful Matchstick Men. It is by far one of Nick Cage's best roles. He plays Roy Waller, a con-man with severe OCD, which, in and of itself, is a peculiar twist. Roy, along with his partner, Frank, played by the always reliable Sam Rockwell, is a career criminal, who expertly pulls off reasonably safe cons, extorting thousands from unsuspecting targets.

Then along comes not only Roy's long lost daughter (Alison Lohman should have been nominated for her portrayal as the coy, callow, Angela), but the chance for one hell of a big time con.

I won't give away details, but suffice it to say, nothing is as it seems. With a tight script, top notch acting, and agile directing by Ridley Scott, Matchstick Men is a delight.

Amazon JunkieReviewed in the United States on May 18, 2021
5.0 out of 5 stars
Fun
Verified purchase
It's a fun little movie with a twist at the end. I have watched this a few times and don't tire of it. The acting is awesome, the story is a neat little package.

M. LoganReviewed in the United States on January 16, 2013
5.0 out of 5 stars
The Proper Way to Con an Audience
Verified purchase
It’s hard to tell someone why this movie is so good without giving away too much... Matchstick Men isn’t quite a con movie, it’s more like a movie about con men. Don’t expect any grandiose and overblown cons like in Ocean’s Eleven. Here, the con is just a day job; it’s what these people do to make a living; it’s secondary to the actual story being told…or so you’re lead to believe.

The fun thing about con artist movies is that you get to be taken along with a crew as they mastermind and orchestrate some elaborate string of deception that ultimately results in a big payday. Most of us wish we could pull something like that off, but in reality, we’re not con men, we’re just marks -- which is why I love these types of movies, they’re pure wish fulfillment.

However, in a lot of recent con movies, the viewers are no longer being allowed to follow the exploits of the con artists, they’re merely being shown an incomplete series of events -- just so the filmmakers can have a big reveal at the end and say, “We got you!” Instead of being part of the crew, the viewer is now just another mark. Because the characters are actually deceiving the viewer, it makes them unsympathetic, and in the end, you don’t really care about what happens to them. You watch the movie not for fun, but to see if you can figure out the con within the con. It undermines the entire point of going to see a con movie.

That’s why Matchstick Men is so cool. Yes, several cons do take place during the course of the movie, but the story is really about the characters, not that ultimate big payday. Then, when the big reveal comes at the end of the movie, you actually share in the character’s emotional plight rather than hating him. It’s perfectly orchestrated and totally logical. And that’s why a truly great con works, because it gets you so caught up in emotion that you forget to think -- not by deleting scenes and holding back pieces of the story.
7 people found this helpful
See all reviews
Back to top
Get to Know Us
Make Money with Us
Amazon Payment Products
Let Us Help You
EnglishChoose a language for shopping. United StatesChoose a country/region for shopping.
© 1996-2021, Amazon.com, Inc. or its affiliates