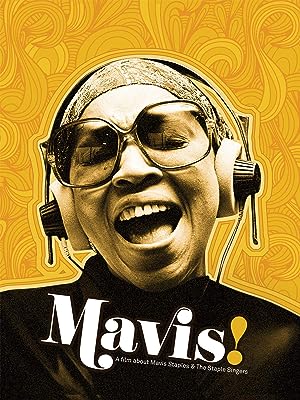 (116)
7.41 h 20 min201613+
MAVIS! is the first documentary on gospel/soul music legend and civil rights icon Mavis Staples and her family group, The Staple Singers. Mavis has stayed true to her roots, kept her family close, and inspired millions along the way.

Rory WhiteReviewed in the United States on December 24, 2016
5.0 out of 5 stars
giants still walk among us. a journey with a humble, selfless, yet butt-kicking Legend, and child of God... Mavis Staples...
Verified purchase
by the end of the film, you realize you've traveled over a large chunk of
a virtual century of American life: African American life from the bare
recent shadows and specter of slavery and intense Jim Crowe, the
rise of the, very lone voice at first, person of Dr. King, and the parallel
and intertwined presence of Pop Staples and his daughters, the Staples
Sisters, and of course, so poignantly, that of the young vibrantly gifted
Mavis Staples... and her journey from singing at the side of Dr. King,
to her influencing, then being influenced, by her one time suitor Bob Dylan,
(and clearly friend and admirer to this day... the interviews with Dylan show
him in a rare complimenting respectful manner as he speaks of meeting
Mavis and Pop and the Sisters when he was a young man... the only time i have
ever seen clip of an interview with Dylan where he seems to forget his
seemingly omnipresent acidic, bumbling offensiveness (likely a very acute shyness,
and social-phobia) that doesn't communicate well, except in his genius-level song-writing),
to just speak so clearly with admiration of other persons... a Nobel
Prize winner talking of Mavis and these exquisite legends, heroes, beautiful
beings, true ...and non judgemental... people, children, daughters of God,
real Christians.... that is what Mavis clearly is and is seen to be in this non
pretentiously paced film.... On a personal note, the film and Mavis' life,
as well as that of her omnipresent supportive sister Yvonne, made me feel okay,
even good, about being an aging artist myself... still creating, as is Mavis,
with the shadow of our own mortality now so tangibly present and growing, but
still creating, still singing, still carving forms and colors of oil paint and the chorded
steel strings of an old electrified guitar, and that voice, and being: Mavis Staples.
true artist. truly humble,
woman of God.

joel wingReviewed in the United States on January 19, 2021
4.0 out of 5 stars
Mavis Staples is a one of a kind singer which this doc captures
Verified purchase
Mavis Staples was part of the famed Staples Singers who helped shape the sound of Gospel and Soul. The group was at the cusp of popular culture in the 1960s when they started doing Folk songs and joined Martin Luther King’s movement for civil rights. She’s still going strong as a solo artist as this documentary notes.

In terms of the actual documentary it has the usual archival photos and footage along with plenty of talking heads. The one differences is that since Mavis is still performing so they have some shots of her current concerts and in the studio.

What immediately stands out is Mavis’ deep and Bluesy tone. It’s unforgettable. Of course the music is fantastic and is what really carries the film.
C
2 people found this helpful

Cherokee Rose ThomasReviewed in the United States on December 20, 2020
5.0 out of 5 stars
Mavis Staples-A Breath of Fresh Air
Verified purchase
Being born and raised in Chicago, I remember Sunday mornings listening to The Staple Singers on jubilee Showcase. Mavis is a breath of fresh air in 2020. She reminded me of Chicago, listening to her family sing while my family sat around the television. The world is a better place because Mavis is still here, spreading joy and love. Thank you, Mavis and Amazon Prime. I needed a dose of Mavis today.

marykbReviewed in the United States on January 10, 2017
5.0 out of 5 stars
Sweet Mavis and her Pops!
Verified purchase
Lovely documentary about Mavis Staples and her Pops. Such an interesting career path that intertwined with many other great musicians: Bob Dylan, Prince, Leon Helms, Jeff Tweedy, and others.
3 people found this helpful

Captain ChesapeakeReviewed in the United States on May 24, 2018
3.0 out of 5 stars
Mavis and Staples Singers amazing, flick not so much..
Verified purchase
Could they not find just -one- more white man to hold forth on the importance of Mavis and the Staples Singers? I know there must be one more out there. It looks like they got them all, but I just know there's one they missed. Just one.
One person found this helpful
See all reviews
Back to top
Get to Know Us
Make Money with Us
Amazon Payment Products
Let Us Help You
EnglishChoose a language for shopping. United StatesChoose a country/region for shopping.
© 1996-2022, Amazon.com, Inc. or its affiliates