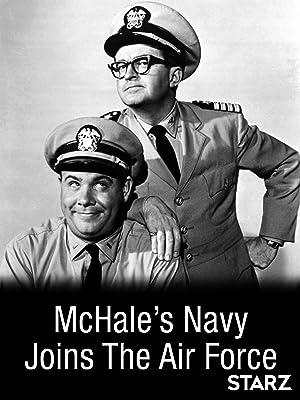 Robert the DispatcherReviewed in the United States on June 5, 2016
5.0 out of 5 stars
Five Stars
Verified purchase
IF YOU LOVE MCHALE'S NAVE TV SHOW. THEN YOU WILL LOVE THIS MOVIE
IT'S FANTASTIC.
2 people found this helpful

SpikesterReviewed in the United States on February 15, 2007
5.0 out of 5 stars
Mostly for fans of the t.v. show
Verified purchase
Even though this movie doesn't include the main character in the television series (Ernest Borgnine), I enjoyed this a great deal. The Ensign Parker (Tim Conway) and Captain Binghampton (Joe Flynn) interactions are as well done as any in the T.V. series. Think of the movie as McHale's Navy starring Tim Conway and you will be close to what this movie is all about. Another plus is the fellow that plays the leader of the Russian sailors was chief Uhuru (sp?) in the t.v. series. I have it on vhs tape and the picture and sound quality are first rate. I think I paid around $10 for it and watch it more often than many of the movies in my video collection.
6 people found this helpful

Larry W. WilsonReviewed in the United States on March 24, 2012
5.0 out of 5 stars
Mchale's Navy Joins Air Force [VHS]
Verified purchase
First of all this movie should be on DVD. I loved this Movie and if you have not seen it , You should !!!!!

morgankingReviewed in the United States on January 9, 2011
5.0 out of 5 stars
its very funny
Verified purchase
Even though it wasn't the dvd ,I got the VHS tape. I bought my husband a new dvd-vcr so he can watch it.I got it on time and yes I will use amazon.com againg
One person found this helpful

Bomb Man58Reviewed in the United States on March 4, 2009
5.0 out of 5 stars
Sequel Movie Without McHale ?
With the success of the first McHale's Navy movie, it seems Universal were keen to follow up with a sequel.

This second movie has LTCOMD McHale (Ernest Borgnine) absent from the film; as well as Gruber (Carl Ballantine, which is not explained). However the crew of the PT-73 seem to take back-stage in this second movies as Ensign Parker and Captain Binghamton end up taking over for most of the film's length.

With everything now left to Ensign Parker (Tim Conway) to command, the crew sets off to Brisbane, Australia with Captain Binghamton (Joe Flynn) for a conference. After exchanging uniforms with the crew of a visiting Russian ship, the crew of the 73 disappear into town. Parker gets involved with the Russian crew, now in the uniforms of the 73 crew, who also go into town and end up getting horribly drunk in a downtown pub. Attempting to escape the clutches of the NKVD, who mistake Parker (now in Russian officer's uniform) for a Russian sailor, Parker and Christy get involved in a mix up with an Army Air Corps Lieutenant, who is the son of General Harkness, and ends up wearing his uniform. The Air Corps officer (Lt. Harkness) is knocked out by the accurate swing of Captain Binghamton throwing a shaving tackle at the Lieutenant, who is carted off to the Russian ship by the NKVD. Parker in the meantime, wearing the Air Corps uniform and mistaken as Lt. Harkness, stumbles through a number of mishaps that see him continually getting promoted.

Binghamton and Parker wind up in a C-47, with a jeep as cargo, and they both end up in the jeep; which falls out of the aircraft and is suspended by ropes, just as it flies over the Japanese fleet. The plane neatly deposits the jeep right in the midst of a conference pondering the possible location of the missing Japanese fleet. The movie ends with Binghamton seeing Parker sitting at the President's desk and thinking he's been promoted (again) to the top job.

I enjoyed this movie just like the TV series and the original movie, which was made a year before (1964). Both movies are in colour, whereas the TV series was filmed in black and white. For those of us who enjoy our McHale's Navy, this movie is great. It just needs to be re-released now onto DVD. As a late (2010) addendum, Madman Video in Australia has released both movies in a two-DVD pack to complete the change of all the McHale's Navy series now to DVD.
8 people found this helpful

Lawrance BernaboReviewed in the United States on November 8, 2003
4.0 out of 5 stars
A &quot;McHale's Navy&quot; movie without McHale? Sure. Why not?
If you thought it was strange that the ABC situation comedy "McHale's Navy" was given the opportunity to make a theatrical film in 1964, then you might not know what to make of the decision the following year to release another film in which the title charcter played by Ernest Borgnine does not appear. Granted, Borgnine's character always seemed to working on a different level than his hair brained crew and the inept base commander, but you would have to think that having their Academy Award winning star (for "Marty") skip this sequel would have been a fatal flaw.
The two reasons it is not is because Tim Conway, as Ensigh Charles Parker and Joe Flynn as Captain Wallace B. Binghamton are still engaging in their zanny antics. The rather strange title comes from the idea that Parker is mistaken for a hot shot fighter pilot in the Air Force (which, of course, was still the Army Air Corps during World War II, but for some reason historical fidelity was not high on the producer's list). Of course, every time Parker screws up he gets promoted. Obviously, with Borgnine apparently on vacation (the series would air through 1966), Parker and Flynn get more slapstick to do, but the script by John Fenton Murray, based on William J. Lederer's story, actually slips in some satire to go along with the physical comedy.
Is 1965's "McHale's Navy Joins the Air Force" better than the 1964 "McHale's Navy" film? Well, yes and no. This one is actually funnier because of the free reign Conway and Flynn have, which is a good thing, but getting so far away from the original series (and its star) still bugs me. But despite that potentially fatal flaw this odd little film is actually an enjoyable experience for fans of the series. For others it is a reminder of what military situation comedies were like between "Sgt. Bilko" and "Hogan's Heroes" (i.e., before "M*A*S*H").
Actually, that last aside should be more specific in reference to the early couple of seasons for "M*A*S*H" when the series was very much in the mold of Bilko/McHale/Hogan. It was not until the classic episode "Sometimes You Hear the Bullet" that we first saw how "M*A*S*H" could become television's first true dramedy.
13 people found this helpful

T. J. BellReviewed in the United States on January 29, 2007
4.0 out of 5 stars
HILARIOUS
Believe it or not, this is a really underrated comedy. Good script, and Joe Flynn and Tim Conway have so much room to stretch out their characters and really push the comedy envelope. Hilarious from beginning to end. I highly recommend it to any fan of the show, or a Joe Flynn or Tim Conway fan. This is arguably their best work.
FYI: The reason why Ernest Borgnine wasn't present for this sequel, is because he was in the desert outside Yuma, Arizona shooting Robert Aldrich's Flight of the Phoenix. That's forgivable.
4 people found this helpful
See all reviews
Back to top
Get to Know Us
Make Money with Us
Amazon Payment Products
Let Us Help You
EnglishChoose a language for shopping. United StatesChoose a country/region for shopping.
© 1996-2021, Amazon.com, Inc. or its affiliates