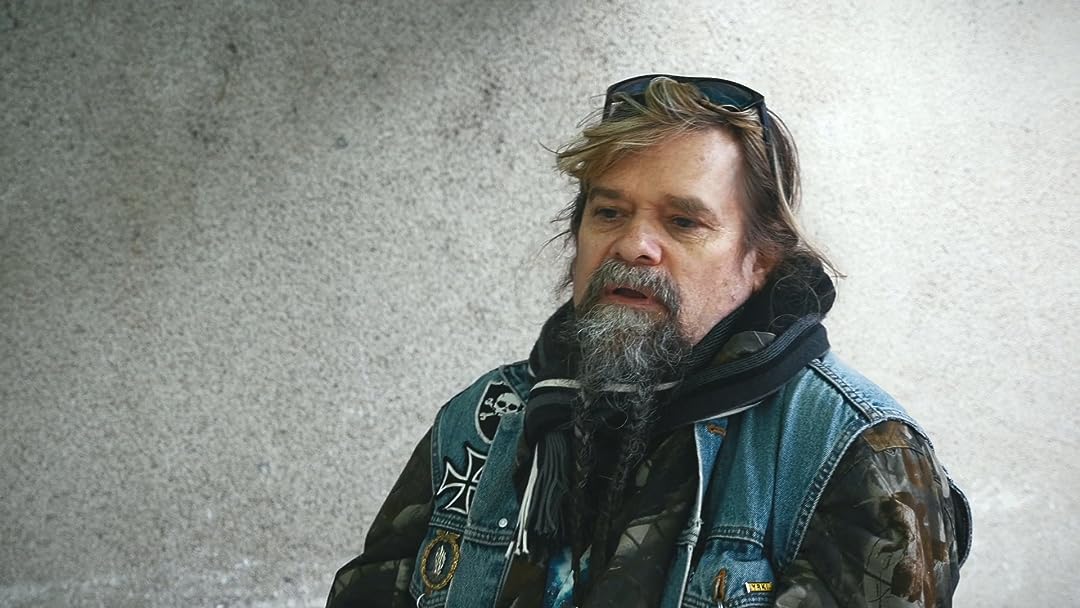 monday night by satelliteReviewed in the United States on February 14, 2021
5.0 out of 5 stars
Homer!
Verified purchase
The long distance shot of Chris making peace signs at the harbor is pure Ozzy Osbourne on Black Sabbath Vol. 4.
Not sure anyone caught that. I was 19 when a friend who worked for W.A.S.P. invited me to "stand guard at the dressing room door" during a Troubadour show in L.A. OK!? In the Mean Man documentary, one person tells us of being physically drained after such a spectacle. Yep and it happened every time. I saw Chris maybe 6 years ago, walking through the Rainbow Bar... laughing "And that's when I was drinking!". 1. He doesn't drink anymore? How'd that happen? 2. He laughs? How'd that happen? Because W.A.S.P. was gloomy - each band members always (always) in a crappy mood, treating it only as a job, And not a great paying job. Chris however was the sole member who loved being onstage just for the sake of playing, which is nice to see in Mean Man. It's also nice seeing Curt Levis, good guy! It may have been Curt who, close to showtime, told me to go fetch "Homer" which is what we all called Chris Holmes. A few blocks down Santa Monica Blvd I found Homer outside a biker bar carousing with friends. Suddenly my 19 year old Badass Hanging With W.A.S.P. persona melted away. Why? Homer was laughing. And in no mood to join Blackie onstage. "Whatever you do .. well you know Homer, be careful!" were Curt's last words. Uh oh. I was so scared I probably blocked it out however I did convince Chris to walk back with me. Rolling his eyes, "Awwright, let's go. To hell with it!". I loved the casual stories I heard from Chris, Blackie and Randy. Most PG rated believe it or not. I even appear in the Blood Drive pics but Blackie probably had them torched after grumbling about my wearing a Van Halen shirt. Heh! My soundtrack to all this was Hanoi Rocks "All Those Wasted Years". Constantly. All considered, watching Mean Man is surreal and intriguing seeing Homer sober, still playing his ass off and writing damn good songs. "The Devil Made Me Do It" would be Ozzy's best charting song in ages.. is it not obvious? I notice the voice is great - when there's a producer. The team of Chris' wife and management make it work (in example the photographer who really made those photos shine probably cost a bit but worth it). The soundtrack is a nice surprise with original music, original W.A.S.P. music and not some generic crap from no-name rock studio dullards. As for me, the last I saw of W.A.S.P. was only 10 minutes opening for Krokus. Weird, showbizzy, gross. Drummer Tony had been replaced by some boring Eric Singer/Matt Sorum type idiot. And Krokus suck so bad it's embarrassing. But Homer is OK which is good to see. He just keeps moving.
11 people found this helpful

AndyReviewed in the United States on January 18, 2021
5.0 out of 5 stars
Spectacular insight into the MEAN MAN, Mr. Holmes
Verified purchase
I've been a fan of Chris Holmes since 84, naturally, it was due to W.A.S.P. Aside from the band and his playing, I've always been captivated by his sheer presence and the way he handled himself in interviews, photo shoots and the public eye - (The Decline Interview) doesn't count. While I've never met the man, it's always felt like I have/had due to the way he carries himself, I can't say that about ANY other musician that I've met or admired. The man is what he says he is. This documentary is a perfect instance of those words, it's raw, it's real and it's 100% Holmes. Is he the Mean Man, sure that's his tag line and how he wants to be seen, is he in actuality, not even close - he's a fantastic human being, a once in a life time guitarist/musician and a lost soul who's been taken for every ounce of talent that could be squeezed out of him. However, I wouldn't be sitting here talking about it had it not all happened this way. W.A.S.P. is my all time favorite band and it has more to do with Holmes than it ever had to do with Blackie - sure I love his cold hearted ass too, but Holmes, man, he's the greatest guitarist walking the planet - the sound, the tone and his approach made W.A.S.P. they're not the same without him, he wouldn't be playing with them anyway, since Blackie found Jesus hiding behind the couch - still haven't figured that one yet. Nevertheless, this is a brilliant documentary, insighful heartfelt and REAL. Stream it, get the blu or the DVD, it's an absolute must have!
8 people found this helpful

Happy Happy Joy joyReviewed in the United States on June 27, 2021
3.0 out of 5 stars
I just dont get it...to me it feels like a fan film for a niche audience.
Verified purchase
I watched 20 minutes of this and at no point did any reasonable facsimile of a story start. In contrast, I had just recently watched the Twisted Sister documentary on Amazon, the Parliament and funkadelics on Amazon, and the Grateful Dead about Bob Weir on Netflix. Those were all indeed documentaries and stories, which were well done and by an independent 3rd party who knew how to assemble material.

This feels like a rough cut of home movies made to be a story and is in essence is just a fan film. The way this was put together had me NOT finding him interesting, engaging, articulate or possessing any previously unrecognized talent. It just feels like man grasping at his lost youth which can only lead to more of the same disappointment thru nostalgia and blurred memories.

Darrin PutmanReviewed in the United States on January 17, 2021
5.0 out of 5 stars
Great history
Verified purchase
Chris is an amazing guitarist, he has an awesome tone. I was fortunate enough to see him in WASP from 1984 up until he left WASP. There wasn't a reason to see WASP after that. I enjoyed this documentary, thanks to the Mean Man and all the music he's given us 🤘
6 people found this helpful

jgarchReviewed in the United States on February 27, 2021
5.0 out of 5 stars
Was excited to see this, then wondering if it would disappoint and the end result was...I liked it!
Verified purchase
Long time W.A.S.P. fan - always loved Chris Holmes' larger than life, approachable personality, so figured "what the hell" and bought it. Then it sat....and sat....and sat...it took me several weeks to watch it, but in the end, it was a fun recap of Chris's entertainment life to date. I will say, I found the relationship between his wife and him touching - as as a dude married for over 20 years, I am starting to become a sucker for couples who stick together and she seems like a sweet gal who keeps his life on track. Chris has not lost his love for rock music and has kept his wild side, while staying sober. Here's to many more years of Chris Holmes, a guy who is not such a "Mean Man" after all!
One person found this helpful

Captain HookReviewed in the United States on November 16, 2021
5.0 out of 5 stars
Really enjoyable rock doc
Verified purchase
Chris Holmes is a more obscure figure in America today, but to metalheads around the world he's the original lead guitarist of WASP. Holmes infamously appeared in Decline & Fall of Civilization pt. II in the late 1980's. This documentary addresses that appearance and fills you in on Chris' life. Far from a "mean man," Chris Holmes comes off as grizzled but warm and sensitive beneath the surface. Sober for 20+ years, Chris enjoys the support of friends, his wife, and family back in LA. His mom is honesly pretty rad, and I think his sister comes off great too. This is just a good film about a good person who's lived life his way, doesn't shit on people for his own mistakes, and really knows himself.

Ebrodin60Reviewed in the United States on June 2, 2021
5.0 out of 5 stars
Never a fan but am one now!
Verified purchase
I've never been a heavy metal fan but I thought I'd watch Mean Man while I did housework. I've never seen W.A.S.P. or any heavy metal bands really, so no idea who Chris Holmes is, but what a surprise! What a nice guy & lived his life the way he chose to. He said he never got anything from "religion" but whatever or however he grew up, he turned out to be one of the nicest guys for sure. What a good movie about a comeback that everyone wants to succeed because of Chris Holmes. Hate heavy metal music but love Chris Holmes, what a great guy.
One person found this helpful

NahtRyceReviewed in the United States on September 22, 2021
2.0 out of 5 stars
Not buyin' it
Verified purchase
I grew up listening to wasp in the 80's and they just weren't all the impactful to the LA scene back then like this tries to make it look. As a guitarist, Chris was never seen as an influential player by anyone I ever knew or played with but this film tries to make it appear that he was. BTW, Chris has a net worth of over 7 million dollars which is comparable to Blackie's almost 9 million. So the poor me I was too trusting thing doesn't fly.
One person found this helpful
See all reviews
Back to top
Get to Know Us
Make Money with Us
Amazon Payment Products
Let Us Help You
EnglishChoose a language for shopping. United StatesChoose a country/region for shopping.
© 1996-2022, Amazon.com, Inc. or its affiliates