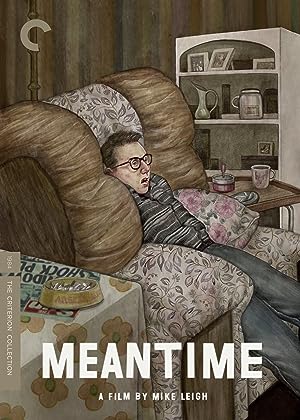 (137)
7.21 h 47 min198418+
A slow-burning depiction of economic degradation in Thatcher’s England, Mike Leigh’s Meantime was the culmination of the writer-director’s pioneering work in television and became his breakthrough theatrical release. Unemployment is rampant in London’s working-class East End, where a middle-aged couple and their two sons languish in a claustrophobic public housing flat.

A customerReviewed in the United States on August 25, 2017
4.0 out of 5 stars
Criterion Bluray Edition (spoilerless review)
Verified purchase
This is an emotionally powerful and rather unique movie. It is one of those films that you can "appreciate" because of how well done it is (by everyone all around in my opinion), yet it is mostly sad and depressing so hard to "like" or "enjoy" from that standpoint. Can be funny in a couple spots, but you feel bad for laughing because of the characters' plight. There are many bad reviews here, but most of them seem based on the quality of old VHS tapes or DVDs. Criterion of course does a fine job cleaning this up, but it is not meant to be a visually dazzling affair (1984 depiction of British housing projects and the effects of poverty).

The film focuses on two brothers trying to find jobs when unemployment was rampant. The one is mentally slow and socially awkward. The other struggles to find purpose and pride given their circumstances, and refuses to give totally in to the skinhead/doc marten boot wearing friends that hang around. Much will be made of Gary Oldman's young punk character, who can sometimes fill the screen with dread in a movie that already makes you feel like you are waiting for the other shoe to drop. Some of the other actors may be more well known overseas, but Tim Roth (from the beginning of [[ASIN:B001AQT0Z4 Pulp Fiction [Blu-ray]]]) plays one brother, and Alfred Molina ([[ASIN:B01KFAWO5S Chocolat]]) plays a small part as well.

Criterion's booklet mentions that this was the time Margaret Thatcher was prime minister, and the film was supposed to be a partial comment on the policies of the day. However, she never comes up directly in the film, and really neither does politics, except for one discussion on what "economics" means between the boy's mom and their aunt. Like many of the scenes it is very uncomfortable (Tim Roth's character, Colin, is uncomfortable just to look at and must have required great effort to stay in character). Great direction by Mike Leigh ([[ASIN:B00BJB2H1E Life Is Sweet (Criterion Collection) [Blu-ray]]]), and the camerawork is particularly good.

Ultimately, "Meantime" is about the brothers and the choices one makes when there are not many real choices in life to be had. Somewhat of a coming of age film for Colin, but a bleak one at that. Criterion extras are mostly interviews and are interesting but nothing to get too excited about. 4 1/2 stars.

Brandon ThiesReviewed in the United States on January 17, 2018
5.0 out of 5 stars
Five Stars
Verified purchase
Great!

PoeKat BratReviewed in the United States on October 21, 2013
4.0 out of 5 stars
When They Were Young...
Verified purchase
If you like having a look-see at the great ones like Tim Roth and Gary Oldman back in the early days when they were barely old enough to grow facial hair, this is the diamond in the rough for you! It's a tad skitter-brained in the way it was thrown together, but Roth and Oldman outshine the limitations and flaws of the overall production. In fact, their respective performances are genius. I wonder if Mike Leigh realized just how talented there lads were and just how far they'd go in the business.
5 people found this helpful

Patrick Mc CoyReviewed in the United States on September 29, 2017
4.0 out of 5 stars
Meantime
Verified purchase
Mike Leigh's Meantime (1984) has gotten a new life with the Criterion release of this previously BBC only screened, made-for-TV film. It is an indictment of the Thatcher-era economic malaise where unemployment was soaring. It looks at a working class family, the Pollocks and their unemployed sons in particular (Phil Daniels and Tim Roth) in London's East End that struggles with the lack of employment opportunities in a specific humanistic way. It is contrasted with the middle class family of their aunt (Marion Bailey) and her listless bank manager husband (Alfred Molina)from the suburbs that suffers in its own way. The film investigates other reactions to this dismal state such as becoming involved in the skinhead subculture through the energetic and aimless Coxy (the first screen appearance of Gary Oldman). It is an accurate reflection of the Thatcher years with remarkable performances from a number of actors who would go onto to successful careers later. The Criterion extras include: a new, restored 2K digital transfer, supervised by cinematographer Roger Pratt and director Mike Leigh, with uncompressed monaural soundtrack, a new conversation between Leigh and musician Jarvis Cocker, a new conversation between actor Marion Bailey and critic Amy Raphael, and an essay by film scholar Sean O'Sullivan.
5 people found this helpful

Thorshammer1348Reviewed in the United States on April 19, 2011
4.0 out of 5 stars
Meantime
Verified purchase
Why is it that Crime,Poverty, Hooliganism are more palidable when the actors are white ?
They're on WELFARE,They sit around the pub drinking on they're Welfare Money ,
AND YES ,IT TOO, IS A HANDOUT!!!
I lived in England during this time,And when came back,
I never looked down on poor blacks and hispanics Ever AGAIN,. THAT SUMS UP THIS MOVIE.
8 people found this helpful

Donna J. RoseReviewed in the United States on November 23, 2014
5.0 out of 5 stars
Five Stars
Verified purchase
A+
One person found this helpful

Robert StribleyReviewed in the United States on July 11, 2000
4.0 out of 5 stars
Time Keeps On Slipping
If you've any doubt of the difference between English and American cultures, watch this early Mike Leigh flick and then think about the fact that it was made for television. The writing in this dark little number is better than that of most of the movies released over here, let alone anything American-made you'll ever see on television.
These are dark character sketches, and I too was reminded of Leigh's Naked as watched, though this movie doesn't share so much of Naked's explicit philosophizing. It does share similarly benighted characters, however, and a central character with the same shiftless way and easy ability to say whatever pops into his head.
Phil Daniels portrays this character, Mark, the story's wise fool: he knows enough to understand his situation is a horrible one; he's quite adept at analyzing whatever goes on around him, and he's revolted by it; but he does little to extricate himself from the situation; his attitude reflects that of most in the film, expect perhaps for his aunt who is always somewhat futilely trying to adjust the status quo.
Mark and his brother Colin and their father (who looks perfectly like an older Phil Daniels) are all on the dole, along with Gary Oldman's character Coxy.
As Mark's half-witted brother, Tim Roth really steals the show; he's so deep into his part, it's easy to forget he's acting. The character development in this story belongs mainly to Roth's character and though the movie seems to start out focusing equally on all involved, events gradually accumulate to have the greatest effect upon him. Interaction especially with Coxy and his brother stirs him to life and the consequences are both amusing and touching. Some viewers won't be happy with the ending--the change may not be profound enough for them--but the change is there and it's a sign of inward struggle, a slight pulsing signal of hope .
Kudos also to Marion Bailey who plays the boys' mother. Her role is not a particularly sympathetic one, but in one striking scene when she plays hurt, your heart goes out to this woman anyway. You understand that beneath her surly exterior there's a woman needing affection from her sons.
Often amusing and surprisingly touching despite its torpid atmosphere, this cunningly simple movie is most greatly enrichened by its characters, many of whom will stay with me for quite some time.
(Footnote: As I watched Naked, I thought that Mike Leigh may be the only director qualified to make a film of Martin Amis's London Fields; Meantime confirms his qualifications for me.)
14 people found this helpful

Robert J. CrawfordReviewed in the United States on August 11, 2011
3.0 out of 5 stars
rambling, strange, plotless take on Thatcher's England
Rather than a story, this film is impressionistic, moving from scene to scene in random sequence with sudden sharp focus. The characters and acting - just look at the debut performances in the cast! - are extremely good, as are the comedic situations of the depressed unemployed going nowhere. Oldman is a dumb skinhead. Tim Roth is a dim-witted younger brother, devoid of ambition and self esteem; his older brother is a lazy cynic, also with no future. The father and mother despise them, yet do nothing to change anything. Molino is a long-suffering relative who works and is bored with his marriage to a rather nice alcoholic.

While I am a fan of Mike Leigh, this early effort is clearly before he has honed his storytelling skills, who will become first rate in such films as Life is Sweet or Secrets and Lies. It is worth a look, but I would not recommend buying it.
3 people found this helpful
See all reviews
Back to top
Get to Know Us
Make Money with Us
Amazon Payment Products
Let Us Help You
EnglishChoose a language for shopping. United StatesChoose a country/region for shopping.
© 1996-2021, Amazon.com, Inc. or its affiliates