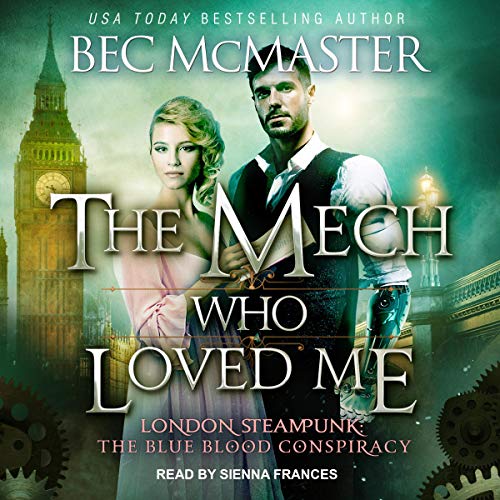 The Mech Who Loved Me: London Steampunk: The Blue Blood Conspiracy Series, Book 2

Ava McLaren is tired of being both a virgin, and a mere laboratory assistant for the Company of Rogues. When a baffling mystery rears its head, it presents her with the opportunity to work a real case...and perhaps get a taste of the passion that eludes her.

Blue bloods are dying from a mysterious disease, which should be impossible. Ava suspects there's more to the case than meets the eye and wants a chance to prove herself. There's just one catch - she's ordered to partner with the sexy mech, Kincaid, who's a constant thorn in her side. Kincaid thinks the only good blue blood is a dead one. He's also the very last man she would ever give her heart to...which makes him the perfect candidate for an affair.

The only rule? It ends when the case does.

But when an attempt on her life proves that Ava might be onto something, the only one who can protect her is Kincaid. Suddenly the greatest risk is not to their hearts, but whether they can survive a diabolical plot that threatens to destroy every blue blood in London - including Ava.

4.3 out of 5 stars
4.3 out of 5
139 global ratings
How are ratings calculated?
To calculate the overall star rating and percentage breakdown by star, we don’t use a simple average. Instead, our system considers things like how recent a review is and if the reviewer bought the item on Amazon. It also analyzes reviews to verify trustworthiness.
Top reviews

Kindle Customer
5.0 out of 5 stars Bec McMaster is the bomb! Literally.
Reviewed in the United States on September 17, 2018
Verified Purchase
Things are always exploding in her Steampunk London universe, and I love it! The action in this novel is stellar, and the suspense is aided by tying together what are arguably the two weakest links in the Company of Rogues. And I am speaking of Kincaid and Ava, who are the heart behind the COR.

Liam Kincaid is a mech, with a massive artificial fist to go with the massive chip on his shoulder regarding Blue Bloods. He isn't the smartest guy on the team, or the fastest, and due to his human status, he might be one of the most vulnerable. However, he does have an equally massive heart that beats beneath the rough and gruff exterior. In my mind's eye, I see a bigger, taller Russell Crowe, a la Gladiator, rather than the urbane skinny boy on the cover.

Ava McLaren is smart and brave and slowly overcoming the horror of her torture at the hands of a crazy scientist. Her brain is continually sidetracked by the man she can hardly believe she has an itch for - her temporary bodyguard in fieldwork, Kincaid. I loved that she is so smart and intuitive with the science part of this steampunk world. I also greatly enjoyed how protective the Company of Rogues were of the brainy yet delicate woman in their midst. She is their heart, and McMaster does an excellent job of staging Ava's sense of hope and how important it is to the team. Unlike many romance authors, McMaster never has her women hating on one another, and the ladies in the recently formed COR are a special blend of new friends and support, and this aspect really develops in the second novel in this series. There are still moments where the ladies are getting to know one another, but you can tell they are going to be forever-sisters.

The action and romance are exciting, and given the personalities of Ava and Kincaid, I thought the love story progressed in an amusing yet expected way. Tie in poison and bombs and cutting-edge mech suits and it is a glut of exhilarating exploits. I couldn't get to the next book fast enough.
Read more
One person found this helpful
Helpful
Report abuse

Theresa
4.0 out of 5 stars Ava and Kincaid IGNITE...
Reviewed in the United States on January 19, 2020
Verified Purchase
4.5 Stars... We are taken deeper into the depths of historical London following the revolution to overthrow the corrupt prince... The relations between humans and blue bloods is fragile at best; one spark and the entirety of peace could explode.... When multiple deaths of blue bloods begin to occur under unique circumstances, the protectors of that peace are called to investigate... Enter Ava and Kincaid who are vastly different yet compliment one another beautifully... Sparks of another sort begin to fly as these two unravel their own painful pasts and learn to accept that opposites truly do attract... In a race against time and deep rooted prejudices, they must discover the truths hidden amongst their enemies and stop a potential genocide that could ignite a war... With dynamic characters, complex storylines, and intense romance, this read holds everything that captivates me in a book... I thoroughly enjoyed it and look forward to continuing with this series:)
Read more
Helpful
Report abuse

Sacha VTop Contributor: Star Wars
4.0 out of 5 stars Very likable characters in a roller coaster read
Reviewed in the United States on February 3, 2018
Verified Purchase
The first book in this trilogy was in a steampunk collection, and it was really good. It was pure steampunk with wherewolves, bluebloods (not quite vampires) and vampires, mechs, humanists, and a little romance on the side.

I picked this book up because of the qualities of the first. This book is straight up steampunk with a large dose of romance and erotica to move it along. I wasn't prepared for that. I don't mind erotica, but romance is not really my thing. That said, this was a really enjoying read and I'm picking up the third book as I've become attached to these characters.

The romance that blooms here wasn't all that unlikely coming off the first book. We find Ava who's a blueblood that doesn't drink blood, instead she's created a serum to stave off the craving. She's a crime scene investigator, and a bookworm who is also quite innocent in the ways of the world. Because she works with a collection of people who have lived or are living very roguish lives they all try to protect her.

Though the cover of the book makes Kincaid look like a normal sized man, he's described as a bulging hulk of a human with a mech hand. He's assigned to assist Ava on an investigation and he hates bluebloods. Due to her innocence and demeanor he falls for her despite his hatred of bluebloods.

Together they investigate the murders of bluebloods and discover a poison that can kill them and the who's and why's. It's a roller coaster and quite a bit of fun reading.

In the end however, the man behind the scenes pulling the strings becomes very obvious, though the line cast into the river that is book three was unexpected.
Read more
Helpful
Report abuse

Why
4.0 out of 5 stars I loved it..
Reviewed in the United States on July 12, 2017
Verified Purchase
This is my 1st steam punk themed romance and I just have one thing to say ,More Please!!
Great story,believable romance with a good slow natural feeling build,....loved it!! Would have loved more of them as a couple but I'm now excited to go back and see what I've missed and see what in store fir Gemma...
I' just hope there's a book about Malloryn's love life at some point ... he too fascinating to pass up... Honestly I was little disappointed at who the bad guy pulling the strings in the "background " seemed a lil to pay/easy and sad ( there was a chance to have kept him for ever being this huge threat if only Mal had be allowed to do what he'd wanted at one time ,sighs but I love what I read here and already have the books to read more, laughs catching them on deals not knowing they were connected ;)
Wooooohoooo ;)
Loving me some steampunk ....
Thank you for the wonderful read ...
Read more
One person found this helpful
Helpful
Report abuse
See all reviews

L. R. Shear
5.0 out of 5 stars Once I started, I couldn't stop. My favourite so far!
Reviewed in the United Kingdom on October 17, 2017
Verified Purchase
This second book in the Blue Blood series is my favourite! The story line that runs as a backdrop to the love romance of the main story brewing, is gripping, but the true hero's are Kincade and Ava. The lust and passion that bubbles at every opportunity that they are together is thrilling. Bec McMaster makes the characters come alive and you easily become hooked to this story. I cannot wait for the third one in this series, which hopefully will lead to a fourth. Ava and Kincade not only bring passion but humour into their love story as all of Liam Kincade's vulnerability and doubt starts to melt away, as he falls hopelessly in love with the intelligent, beautiful but fragile Ava. Their haunting pasts threatening to undo something wonderful between them. Do not hesitate to read this, as once you start, you will not be able to stop! Though I urge you to read all of the Steam Punk series first, so that you get to know all the characters that entwine through the books. Fabulous!
Read more
One person found this helpful
Report abuse

S. Lacey
5.0 out of 5 stars Excellent!!
Reviewed in the United Kingdom on July 4, 2018
Verified Purchase
I really enjoyed this one. Loved Ava & Kincaid as a couple, they were well suited and good for each other. There was a bit of a surprise twist at the end that I look forward to seeing the outcome of in the next few books. I was sad about what happened to Garrett, I love the guild master and hope we get an update on him next book too!
Read more
One person found this helpful
Report abuse

Danielle
5.0 out of 5 stars Spy novel filled with suspicious deaths and terrorism
Reviewed in the United Kingdom on July 28, 2018
Verified Purchase
Set in the world of Bec’s London Steampunk series, this book follows the Company Of Rogues’ desperate race to discover the cause of death of newly infected Blue Bloods. Ava and Kincaid make an unlikely pairing which adds to the spice of their relationship. Not a book for those of a prudish nature
Read more
Report abuse

G. Russell
5.0 out of 5 stars awesome read
Reviewed in the United Kingdom on September 24, 2018
Verified Purchase
loved this one!
Read more
Report abuse

Amazon Customer
5.0 out of 5 stars Yet another awesome book from Bec McMaster
Reviewed in the United Kingdom on August 3, 2017
Verified Purchase
Yet another awesome book from Bec McMaster! Great characters that ooze chemistry with an overriding story arch leaving you aching for the next book!
Read more
Report abuse
See all reviews
Back to top
Get to Know Us
Make Money with Us
Amazon Payment Products
Let Us Help You
EnglishChoose a language for shopping. United StatesChoose a country/region for shopping.
© 1996-2022, Amazon.com, Inc. or its affiliates