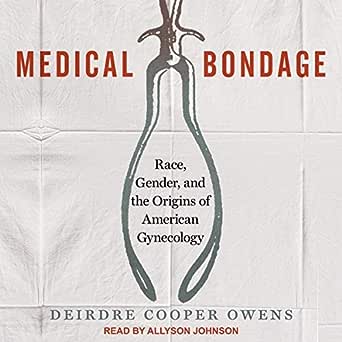 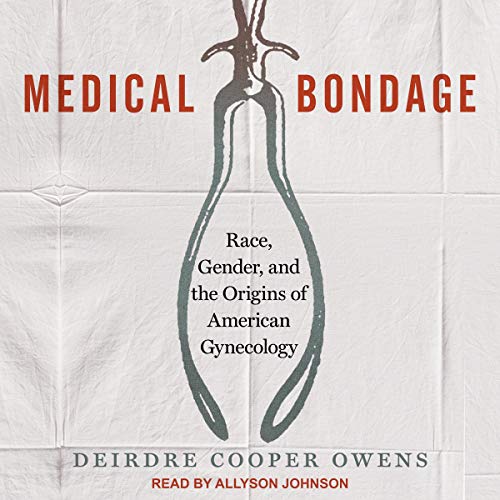 Medical Bondage: Race, Gender, and the Origins of American Gynecology

4.8 out of 5 stars
4.8 out of 5
20 customer ratings
How does Amazon calculate star ratings?
Amazon calculates a product’s star ratings based on a machine learned model instead of a raw data average. The model takes into account factors including the age of a rating, whether the ratings are from verified purchasers, and factors that establish reviewer trustworthiness.
Top Reviews

Elle
3.0 out of 5 stars Book is fantastic, audiobook narrator's choices aren't
Reviewed in the United States on June 9, 2020
Verified Purchase
This book is in-depth and important, and I highly recommend it. The audiobook's narrator makes some interesting choices, though, including using accents for the quotes included. It was off-putting and inappropriate, and I'm still not sure why this was the way they decided to go. If you're deciding between Audible and the physical book, I'd choose the book.
Read more
5 people found this helpful
Helpful
Comment Report abuse

Mark S Thompson
5.0 out of 5 stars It's an important historical book.
Reviewed in the United States on March 23, 2020
Verified Purchase
Very interesting but not surprising what African American women suffered but also contributed in the science of women's reproductive health and creation of gynaecology as a field of medicine.
Read more
One person found this helpful
Helpful
Comment Report abuse

Dee
5.0 out of 5 stars Great read
Reviewed in the United States on July 13, 2019
Verified Purchase
Extremely interesting and informative book. I was assigned this book as a class assignment and have enjoyed every second of reading kt.
Read more
2 people found this helpful
Helpful
Comment Report abuse

emma
5.0 out of 5 stars Five Stars
Reviewed in the United States on January 26, 2018
Verified Purchase
i wish everyone who knew someone with a c-section read this book.
Read more
4 people found this helpful
Helpful
Comment Report abuse

Marina
5.0 out of 5 stars History of ob/gyn in America
Reviewed in the United States on September 27, 2017
 

This is an amazing book about history of American obstetrics and gynecology. The author refers to historical and medical facts, doctors and their devices that some of us very familiar. A good example would be Dr. Sims, his practice, research, and famous medical devices such as Sims forceps. Did you know that he relied on speed during surgery, in order to save women's lives? Well, sounds familiar for those of us, who was in OR, right?
The author explains well the origins of practice of a gynecologist versus a midwife, male versus female practitioner with different scope of practice. The need for pain relief during birth for a white woman versus black is also discussed as well as the view of female body as weaker than male one.

msluv2read
4.0 out of 5 stars Informative
Reviewed in the United States on March 6, 2018
Very infomrative book. Good comparisions, and aknowledging the role black women have played in this field. Good read. Thanks to NetGalley, the author and the publisher for the ARC of this book in return for my honest review.
Read more
2 people found this helpful
Helpful
Comment Report abuse
See all reviews from the United States