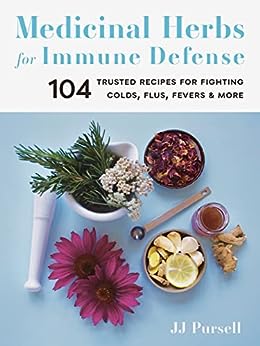 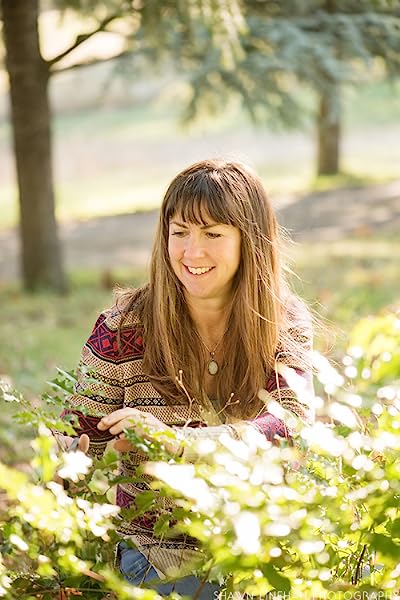 by JJ Pursell (Author) Format: Kindle Edition
See all formats and editions
Sorry, there was a problem loading this page. Try again.
“Read this to naturally boost your immune system and successfully battle colds and flu.” —All the Good Books

Are you looking for safe and natural ways to support your immune system? Dr. JJ Pursell is here to help with herbal recipes focused on preventing, addressing, and healing hundreds of common health concerns.

Medicinal Herbs for Immune Defense offers recipes that will help you support and build up your immune system, with recipes addressing common health concerns like colds, the flu, bronchitis, coughs, and more. The 104 recipes include capsules, salves, teas, tinctures and more that are safe and easy to create at home. You will also learn how to build a home apothecary and find value in a primer focused on the most powerful herbs. Don’t wait for illness to strike—prevention will always be the best medicine.
Read more
Previous page
Next page
Due to its large file size, this book may take longer to download

This plant with the little dark purple berry and the white elderflowers has really made the scene over the last few years. Elderberry syrup is a common recommendation for colds and flus, and it is said to be antiviral. Like most berries, elderberries are high in bioflavinoids and have antioxidant properties, helping to protect the body against free radicals and oxidative stress.

Drink this from time to time throughout the year to keep the immune system sharp and ready.

Mix the herbs in a bowl and store in a glass jar. Steep 4 or 5 tablespoons in a quart of hot water overnight. Strain and drink 3 cups a day, either occasionally or for 1 to 2 weeks at a time to support the immune system.

“A good resource for an introduction to herbal medicine.” —Booklist

“Read this to naturally boost your immune system and successfully battle colds and flu.” —All the Good Books

Dr. JJ Pursell is a Naturopathic physician, acupuncturist, author, and entrepreneur. She owned and operated a small chain of herb shoppes over 13 years in both Portland, Oregon, and Brooklyn, New York. In 2014 she transitioned into writing and published her first book in 2015. Since retiring from retail she has continued to write, speak, formulate, consult, and spend time seeing patients.

Dr. JJ is a board certified naturopathic physician and licensed acupuncturist and has worked with medicinal herbs for more than 20 years. She has taught and trained with herbalists all over the world but prefers the practice of close-to-home grown western herbs. Fettle Botanic, once known as The Herb Shoppe, focuses on offering the most vital organic herbs available, while sustaining local growers. She has been involved in her local business districts of Portland and Brooklyn, NY and a member of both the OANP and AANP contributing to events and policy opinion. She served 1 year on the board of Woodhaven school in Portland, OR. Dr. JJ is an expert in FDA regulations and herbal medicine, Title 21. She published her first book, The Herbal Apothecary, with Timber Press in 2015 and is in contract to write a second book with them and another book with Quanto Press. She speaks across the country at expos, conventions, schools and groups such as the NY Horticulture society. The Herb Shoppe was voted “the best apothecary in Portland” by Willamette Week and was written up in Portland Monthly magazine and The L Magazine in New York City. JJ and her shoppe have been featured in several blogs and Tumblr sites, including Gardenista, White &amp; Warren Inspired, Kale and Coriander, Portland Healing Project, PoppySwap, and Girl Gift Gather. JJ appeared on “Green Living,” a BCAT television show in Brooklyn; the “Bread and Roses” radio show on Portland’s KBOO; and “Wise Woman Radio” with Susun Weed. She also was included in the book Curing Canine Cancer and contributed to the new edition of Hot Pants: A Do It Yourself Gynecology and Herbal Remedies. She has her own YouTube channel for those who want to learn more about making herbal medicine.

Charli B.
5.0 out of 5 stars Well written and packed with wonderful information
Reviewed in the United States 🇺🇸 on July 7, 2022
Verified Purchase
I rented this book from the library and absolutely fell in love with it! It’s a wonderful resource for anyone looking into making herbal preparations for themselves and their family.
Read more
Helpful
Report abuse

Maidenofmoths
5.0 out of 5 stars One of my go-to titles
Reviewed in the United States 🇺🇸 on February 3, 2022
Verified Purchase
I am constantly referencing this book in my day to day studies. It's a great book to have on hand if you're trying to learn more about herbal medicine, especially when taking care of yourself and your family. Great info, excellent presentation. Easy to read and navigate.
Read more
One person found this helpful
Helpful
Report abuse

Medicinal Herbs for Immune Defense by JJ Pursell is a great resource for identifying herbs to boost your immune system naturally.

There are instructions of how to make your own capsules, essential oil blends, fomentations, liniments, medicinal teas and more.

Each herb described includes a picture, as well the benefits and which parts are used.

I found this book to be fascinating and I look forward to trying some of the recipes. If I could relieve my allergies without the need of 3 prescription medications I would be so happy!

This is a great resource and I recommend it to anyone looking for information on natural remedies and immune support.

I'm so grateful to JJ Pursell, Timber Press, and NetGalley for providing me with a free copy of this ARC ebook in exchange for my honest review.
Read more
One person found this helpful
Helpful
Report abuse

Succotash
5.0 out of 5 stars Great book on home medicine
Reviewed in the United States 🇺🇸 on February 22, 2021
If you’ve ever thought about creating your own medicinal items in your kitchen but didn’t know where to begin, then this book is just what you need.

Medicinal Herbs for Immune Defense has 104 recipes for all sorts of ailments that you can create at home using things you can grow in your garden. Pursell talks in detail about 60 essential herbs and plants that go into the many recipes, but she also states that if you concentrate on say 20, really get to know them then you’ll have the information you need to really create a preparation unique to your circumstance – if you know how an herb performs and what it can do you’re equipped to make something useful.

The 60 herbs and plants have pictures, the common and scientific names, and what parts of the plant is used in medicine (like the flowers, petals, rhizomes or roots, leaves, stems, bark, seeds, berries, the whole plant, the fruit, etc.)

What do you do with the plants? You make the preparations. I loved how the author describes each and details how they are prepared. This is a highly useful book for taking care of ailments and sickness using things you have in the garden or can get in nature. I think it should be in everyone’s library.

This book was provided by the publisher and any opinions are my own.
Read more
One person found this helpful
Helpful
Report abuse

Adendyut
5.0 out of 5 stars A Wellness Guidebook
Reviewed in the United States 🇺🇸 on March 22, 2021
Medicinal Herbs for immune defense is a complete guidebook to natural remedies and herbal concoctions that will help to fight miserable maladies such as colds,,flu and respiratory issues.. It can also help in boosting the immune system with recipes that include ingredients such as elderberry...This book is well timed for all of the current health concerns being faced in our daily lives.
Read more
Helpful
Report abuse

Mel_t
5.0 out of 5 stars Excellent resource!
Reviewed in the United States 🇺🇸 on March 28, 2021
Timely resource on optimizing one's immune system using herbs, flowers and essential oils. This book has easy to follow instructions and colorful illustrations. Includes sections showing names, photos and uses of plants used in herbal medicine, recipes organized by type of illness and guidelines and recipes for treating babies and children. Great resource to have on hand in any household.
Read more
Helpful
Report abuse

Deb Drollinger
5.0 out of 5 stars This is a great book! Very informative and helpful with foraging.
Reviewed in the United States 🇺🇸 on March 15, 2022
Verified Purchase
I really like this book!
Read more
Helpful
Report abuse
See all reviews
Report an issue
Does this item contain inappropriate content?
Report
Do you believe that this item violates a copyright?
Report
Does this item contain quality or formatting issues?
Report