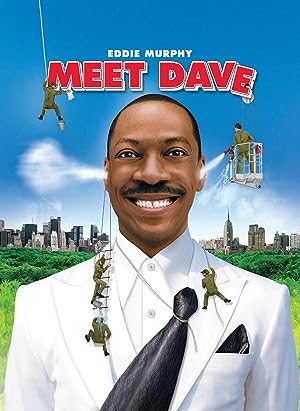 (1,379)
5.01 h 30 min2008X-RayPG
Seeking a way to save their doomed world, a crew of tiny, human-looking aliens arrives on earth in the perfect disguise--a spaceship shaped like Eddie Murphy, the ship's captain. While trying to save their planet, the aliens encounter problems, as their ship becomes smitten with an Earth woman.

Tom McQReviewed in the United States on January 9, 2022
1.0 out of 5 stars
Mindless, harmless drivel
Verified purchase
Eddie Murphy told a producer he wanted to star in a movie where he could stretch beyond his current acting skills. Stretch -- as in stretching his facial muscles with goofy grins, quadriceps with silly walks, and pecs with salsa dancing. This is the only explanation for this movie.

The premise of "Meet Dave" is promising -- a crew of aliens from a dying world must destroy Earth to save their planet. But they fall in love with Earth and its people and feel conflicted over which planet is worth saving. The writers took this cute concept and bludgeoned it to a merciless death with a poor script that's so incoherent and simplistic, a 5-year-old would tell you it doesn't logically hold together. Worse, the characters are one-dimensional stereotypes *not* brought to life by actors trying to figure out what space-aliien caricature they're trying to be in any particular scene.

There's one funny scene in the movie, well-played by Murphy. An alien robot Eddie Murphy holds his arm out on a busy Manhattan street, trying to hail a cab. After four or five cabs whiz by this Black off-worlder without stopping, he says, "What, an alien cannot get a cab in this town?" Is that one laugh worth 90 minutes of your time?

Michael A.Reviewed in the United States on December 31, 2020
4.0 out of 5 stars
Don't let the cover fool you.
Verified purchase
So, I stayed away from this movie for a looong time because Eddie Murphy kinda quit being funny and then went on a family friendly tangent ("RAW", 1987, anyone?). The cover of this movie just looks stupid.

Under the thumbnail was a pleasant surprise. Murphy is funny, albeit not vulgar. It's been a little while since I watched this, but I do remember that it was an entertaining way to kill an hour and a half when I was looking for something light to watch. I do appreciate Murphy's more dramatic work like "Mr. Church" (2016), but it was nice to find this lighter film from a few years earlier that I'd missed.

Brooklyn PhantomReviewed in the United States on July 10, 2021
2.0 out of 5 stars
Funny, family film.
Verified purchase
This is a mildly amusing, clean, family film. My 8 year old son enjoyed it. I felt that it could've been funnier. Murphy was excellent with his physical comedy. More screentime for Union and Hart would've improved the film. Union and Murphy had good chemistry. More time should've been devoted to their budding romance. Recommended for parents looking for a clean, family film for their children. This film has a positive message. Love yourself and others. Recommended for Eddie Murphy fans who enjoy the clean Eddie.
One person found this helpful

AdamReviewed in the United States on November 24, 2021
4.0 out of 5 stars
Why have I never heard of this, before?!?
Verified purchase
I love Eddie Murphy and he definitely gave it his all here. Just can't believe I never heard of this movie, before. I just happened to be scrolling through prime and saw this and thought to myself, hmm, why not. Sure glad I did. Very underrated in opinion with lots of laughs.
4 people found this helpful

GalvanizedReviewed in the United States on July 29, 2020
4.0 out of 5 stars
Fun movie for adults and kids
Verified purchase
It's silly but good. Both adults and kids will like it. Well-acted, fun special effects and it's clean entertainment. Eddie Murphy uses his physical comedy, facial and voice skills like the pro he is. I think this is one of his best movies. The other cast members were good, too.
4 people found this helpful

David E. BaldwinReviewed in the United States on August 24, 2012
5.0 out of 5 stars
Eddie Makes Amends For "Daddy Daycare"
Verified purchase
It's admirable that Eddie Murphy after becoming a parent wanted to branch off from the raunch and make family films. That said does anybody have any affinity for "Dr. Dolittle 1 & 2" or "The Haunted Mansion"? Does anybody remember these flicks moments after watching them and going to Friendly's afterwards? "Meet Dave" is the exception to these films. It's funny, clever, and imaginative. Visually it's a feast for the eyes. Murphy essentially takes on two roles, the captain of a spaceship manned by miniature aliens who've come to Earth to extract ocean salt to save their planet and the spaceship itself that is a life-sized version of the captain decked out in Seventies disco attire. Murphy shows the versatility and dexterity here that he did in other films that he took on multiple roles. His work here recalls that of his idol, Jerry Lewis, and Peter Sellers. I remember when this film came out in the Summer of '08 and did a slow fade among all the blockbusters. This gentle funny fable is worth checking out. It beats a lot of the so-called family fare that's offered the public. "Daddy Day Camp", anyone?
4 people found this helpful

CPT. (ret.) Anne M. ClarksonReviewed in the United States on April 1, 2018
5.0 out of 5 stars
Ah, its all about love and blending in LOL!! You are gonna love it!!
Verified purchase
OMG, you better not be drinking a soda while you watch this it may come back out of your nose when you laugh. I was so surprised but this movie that I have no idea why it was never big at the box office. This is a real family winner, so get your kids, some popcorn and your cuddle bunny and watch it I guarantee you will love it. Imagine you are about four inches tall and travel to a planet you have never been to and everyone there is taller than the Statue of Liberty. Now, imagine your space ship is shaped like the creatures that live on that planet! Now go out there and "blend in".
See all reviews
Back to top
Get to Know Us
Make Money with Us
Amazon Payment Products
Let Us Help You
EnglishChoose a language for shopping. United StatesChoose a country/region for shopping.
© 1996-2022, Amazon.com, Inc. or its affiliates