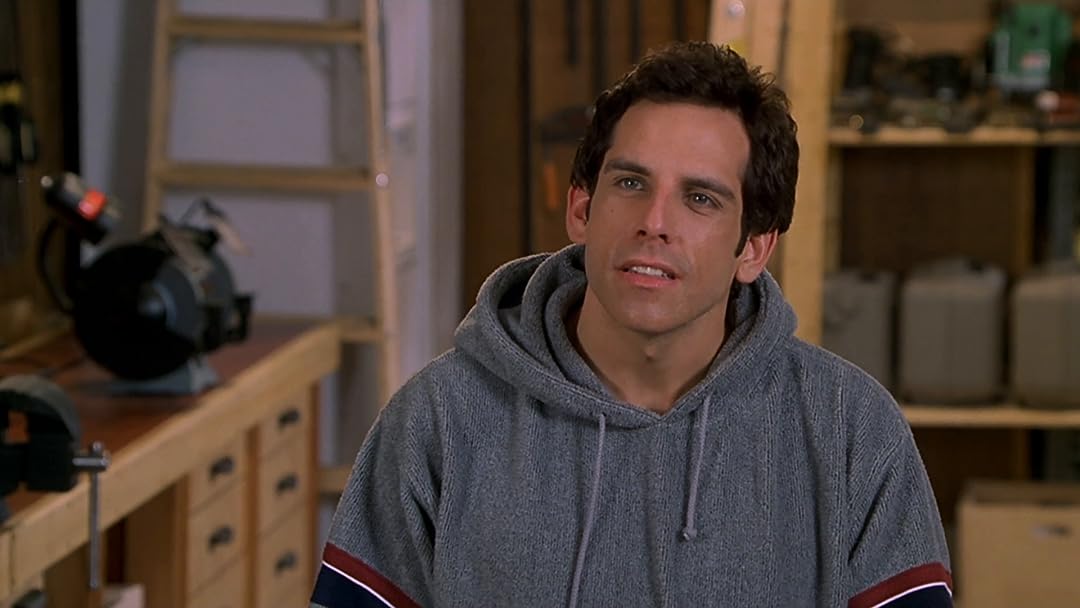 J. ToopsReviewed in the United States on June 21, 2020
5.0 out of 5 stars
Freaking love this movie--gets funnier as I get older
Verified purchase
Saw it when it first came out, saw it a few times afterwards when it aired on TV in the 2000s, saw it a month ago with my tween kids.

Oh Lord, it somehow got funnier! How does that even happen? I literally (yes, there were tears) cried with laughter during some of the most cringeworthy scenes. My 13-year-old daughter had to leave the room a couple times because she couldn't handle the escalation in humiliation. My younger daughter screamed with laughter.

When I asked them if they'd watch the sequel with me, the 13-year-old yelled, "No! No way!" and went upstairs to bed. My younger daughter was ready to hunker down for another two hours of Fockers, but I had to nip it in the bud since it was already midnight.

I highly recommend this movie for over-the-top, family viewing (ages 13 and up).

Serkan OkarReviewed in the United States on January 17, 2019
5.0 out of 5 stars
One of the best comedies in the last 2 decades
Verified purchase
Meet the Parents is one of the best comedies of the last 2 decades. Its basic premise is simple but the script, the acting and all the comedic elements compliment each other very effectively. It's the suitor meets the father story. The father (Jack) is brilliantly portrayed by Robert DeNiro who typically doesn't play in comedies (or he hasn't typically starred in comedies with few exceptions). He is perfect for the role and so is Ben Stiller who plays the suitor (Greg), who is dating Pam, Jack's daughter. Greg is a nice fellow but Jack is the type of father who is overly critical of Greg's qualifications and things get from bad to worse quickly in a series of misunderstandings and mishappenings. Even though comedy is not my favorite genre, I hold regard this one very highly. This is one of the few modern Hollywood comedies in my collection. Some other great comedies since the 2000 are [[ASIN:B004ZJZQ1A The 40-Year-Old Virgin]], [[ASIN:B00LVGTPYO Wedding Crashers]], [[ASIN:B001JNNDDI MIss Little Sunshine]] and [[ASIN:B001UV4XEW The Hangover]]
2 people found this helpful

michaelb1968Reviewed in the United States on March 27, 2001
4.0 out of 5 stars
Watch it with friends
Verified purchase
I imagine the people that didn't like this flick probably watched it alone, or maybe with a significant other. Many comedies need a group viewing (theatres obviously work best) to get the full laugh effect. I viewed "Parents" twice: once alone with my wife, and again the next day with a few relatives over. It was definitely "funnier" the second time. Likewise, my 2nd screening of "American Pie" (solo) did not produce nearly the same laughs as my first screening with my beer-swilling friends. I believe setting has a lot to do with how a comedy is perceived.
That said, "Parents" was a funny flick. I am not a big DeNiro in a comedy setting, but he handled himself great here. Ben Stiller has obviously found his niche and was again funny here. Teri Polo looked juicy and held her own with Stiller and DeNiro. The future in-law family was incredibly funny, and Owen Michael as the rich ex-fiance was a gem.
The running gag on Ben Stiller's last name (Focker) never got old, and managed to generate laughs by itself. The cat storyline was cute. The DVD has some great extra features which add a half star to my rating.
All in all, it is a fun couple hours where you suspend belief and have some laughs. It is what it is. Enjoy!
7 people found this helpful

David KusumotoReviewed in the United States on January 28, 2001
5.0 out of 5 stars
What a surprise! A winner on every level!
Verified purchase
This is a film that I winced at every time I saw its trailer. There was nothing funny about it at all and I initially thought it was a HUGE mistake on the part of DeNiro and Stiller to do a film like this. I had NO intention of seeing what looked to me like a one-joke, sophomoric film aimed at people in their teens and 20s, at the exclusion of the rest of us old fogies.
So what happened?
Opening week, good word of mouth, great reviews...
So the next weekend, I went in and found myself howling out loud, doubled over at how crazy and deliriously funny this picture was.
The thing you have to remember is that trailers and ads usually give away most of the best scenes and are solely responsible for getting people off their rears and into their cars and into their seats at the theater. A marketer's job is to make a bad film into a winner on opening weekend, at whatever cost. This is why so many bad films come up big at the box office on opening day and then peeter out in a couple of weeks. To make matters worse, I was unimpressed with the ads and trailers to "Meet the Parents." I hated the whole ad campaign as much as those dumb commercials on TV by an unnamed hamburger chain.
But while watching "Meet the Parents," the context of these scenes were fleshed out and the result was equal parts nonsense and intelligence. It made the film a first class winner, the funniest picture of the year.
Please note that I PAY to see more than 50 films a year, and I don't do it for a living. Seeing movies in a theater are a joy, and to me, time is more important than money. "Meet the Parents" lowered my expectations going in and it came out a winner, big time. It's on my list of the top ten pictures released in 2000.
I was amazed at how the story piled on layer after layer of wild situations; it was like watching one of those great screwball romantic comedies of the 30s and 40s. The best thing about "Meet the Parents" is that the material is not, as one favorable critic put it, "dumbed down" despite its premise. You FEEL for Stiller's predicaments and his frustration as things get worse. And when it does, it doesn't make you feel exasperated, impatient or frustrated. It's hilarious. You also FEEL for DeNiro's suspicions as an overly protective father who borders on being chillingly insane. My favorite scenes are the "crying poem recital," the "drag race" (won't say anything more about those, see them yourself!) and the stuff going on at the airport.
So the trailers had me fooled.
Reflecting back, there were two keys to this film's success.
The first key is the execution of each scene. You might not be impressed when someone tries to explain the film to you, but when you see it on the big screen, you see how there is a logical progression to the insanity that develops in "Meet the Parents." The insanity, it's hard to explain, makes sense when it plays out, and it doesn't take any marvelous or expensive special effects to "push" the comedy at all. It's played straight and that's what makes "Meet the Parents" funny.
The second key to the success of "Meet the Parents" is the most important...
Ben Stiller is so damned perfect for this role.
Despite the sheer nuttiness of this film and the horrible situations he gets thrown in, Stiller's innate intelligence comes through. Despite what happens, he's not an idiot. His reactions are priceless and he doesn't play the role as a dufus. He's a guy with common sense who desperately wants acceptance by DeNiro. That's why you root for him. He's not overly attractive in any conventional way -- but his charisma as an actor in this role shines because he does what he does best -- and that is to play each scene like a smart guy who can't believe the things that can go wrong IN SPITE of the well thought out, meticulous planning and foresight that any smart person would do, and he demonstrates as much to the audience when he goes through the motions to try to please his fiancee's family in a big, big way. When he fails, he can't believe it. And neither do we.
"Meet the Parents" is wall-to-wall fun, the most pleasant movie-going surprise of 2000. And the ending is wonderful. The last scene before the credits is practically given away in the trailer (again, I won't mention it), but where they put it in the film is priceless...
Get it!
5 people found this helpful

Kevin BenderReviewed in the United States on September 10, 2015
5.0 out of 5 stars
A Classic
Verified purchase
I can't recommend this movie enough. If you're looking for a fun comedy with interesting and memorable characters, then look no further. The dynamic between Greg (Ben Stiller) and Jack (Robert De Niro) really carries this movie, with one misfortune or misunderstanding after another leading to some pretty funny situations that (thankfully) never feel completely over-the-top. That fact alone broadens the appeal of this movie, arguably even to the point that I'd probably recommend it to people who generally aren't so into comedies.
6 people found this helpful

M. A. RamosReviewed in the United States on August 10, 2001
3.0 out of 5 stars
Why you shouldn't visit the in-laws.
Verified purchase
Greg Focker is completely in love with Pam Byrnes and plans to use the trip to her parents' house on Long Island to ask her to marry him. Once Greg is introduced to Pam's parents, however, things stampede steadily downhill. Pam's father Jack takes an instant and obvious dislike to his daughter's boyfriend, making fun of his job as a nurse and generally making Greg painfully aware of the differences between him and Pam's family. Where Greg is relatively unambitious, and Jewish, Pam comes from a long line of well-mannered, blue-blooded WASPs. Things go from bad to worse, with Greg incurring the wrath of both Pam's father, who worked for the CIA for 34 years, and the rest of her family, and almost single-handedly destroying their house and the wedding of Pam's sister.

Hannah MooreReviewed in the United States on August 7, 2020
5.0 out of 5 stars
Movie so sick.. I’m not talking a pandemic
Verified purchase
“Show me a man that’s gentle and kind, and I’ll show you a loser.”

That’s it. Greatest movie ever made. Watched it every night my eighth grade year of middle school and I am happy to let you all know that I know every single word to the movie meet the parents LOL. This movie and “The Wedding singer “ are all you ever need
One person found this helpful

N. BeitlerReviewed in the United States on January 6, 2016
5.0 out of 5 stars
Still very funny after all these years!
Verified purchase
This movie remains one of the funniest movies I have ever watched. I had it on VHS when it first released, many years ago. It has been a long time since I have owned a working VHS player, and it's been quite a while since I watched this movie. My wife and I were recounting a few of the funny scenes from the movie, a few weeks ago, and I decided it was time to watch it (and own it) again. After watching it, again, I still found it to be quite hysterical. This is one comedy almost everyone will enjoy!
2 people found this helpful
See all reviews
Back to top
Get to Know Us
Make Money with Us
Amazon Payment Products
Let Us Help You
EnglishChoose a language for shopping. United StatesChoose a country/region for shopping.
© 1996-2022, Amazon.com, Inc. or its affiliates