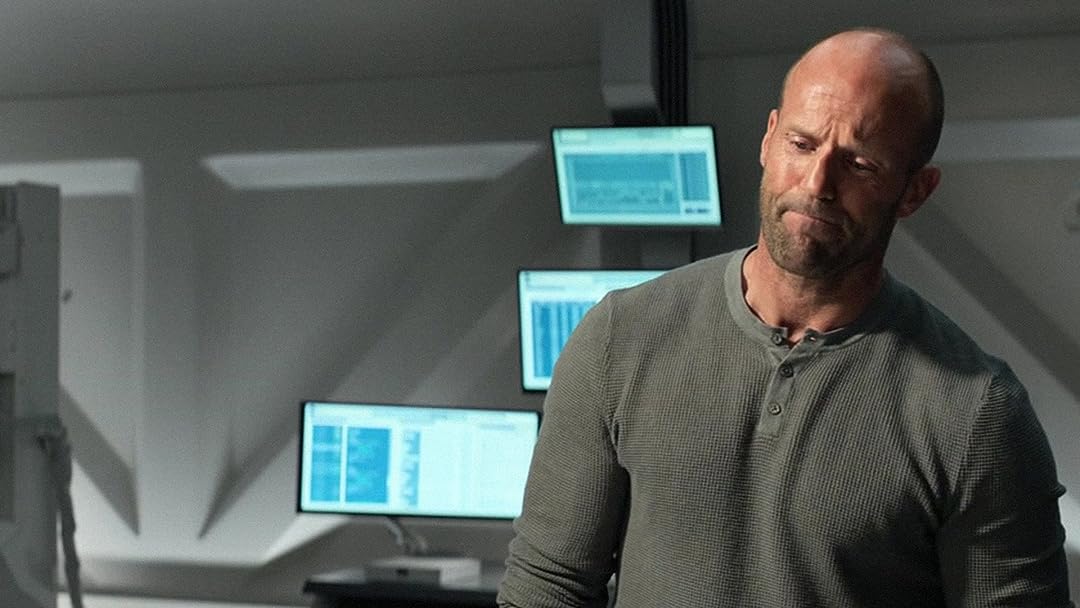 (35,376)
5.61 h 53 min2018X-RayPG-13
With time running out, rescue diver Jonas Taylor (Jason Statham) must save the crew of a deep-sea submersible from a colossal 75-foot-long prehistoric shark known as the Megalodon.

CaswellReviewed in the United States on October 31, 2018
4.0 out of 5 stars
A fun watch
Verified purchase
A sci-fi movie that hits all the 'monster' marks that borrows heavily from Godzilla and Jaws. A good movie for folks looking for a diversion and have some fun.
48 people found this helpful

DraculaReviewed in the United States on November 28, 2018
1.0 out of 5 stars
Thought it would be a funny B movie but it was AWFUL
Verified purchase
I usually love whacky ridiculous Statham movies but this was utter garbage. The effects are really bad, the premise that China is super hip and friendly was absurd, the amount of PC in this movies was terrible to the point I think big ole' bad Meg ate a whopping 3- 5 people. Its ridiculous!!!! Not in a cheesy hilarious way like Tremors.... Its rife with over the top PC sensitivities and its not even a monster flick its just plain AWFUL.
28 people found this helpful

kwgphxReviewed in the United States on November 18, 2018
5.0 out of 5 stars
Loved it, loved it, loved it and in response to the critics …
Verified purchase
The Meg has great action, its pace keeps our attention, and it’s well acted. It has humor with Toshie and The Wall (weird name) and little Meiying and humor always adds a nice touch to a scary movie. The Meg has some neat twists and just when you thought it was over, here we go again!

And stop comparing it to Jaws. Yes, Jaws is the epitome of the shark movies and no film can improve on that because it first introduced us to the likes of it, not to mention that eerie soundtrack which was like a character itself in the movie. But that doesn't mean others can't be done as well. If smart, the producers or whoever will capitalize on the wonderful portrayal of Jaws' mechanical and CG sharks and forge ahead to make them even more thrilling which they've done here. But it is still just a shark movie and within the confines of that, it can only do a few things to make it unique. Jaws had the believable sheriff trying to save his town from a great white and a greedy major. The Meg has a believable megalodon and greedy benefactor and the Deep Blue Sea (another really good shark movie) uses shark antibodies to treat Alzheimer’s - but over does it just a tad (and a nice benefactor in Samuel L Jackson!).

And those complaining about the actors (and the actors in these mentioned movies did a great job making us feel as if we were there), don’t expect all A-list actors. You really wouldn't like it because you would be too busy watching them (for some reason) and not notice the main character - the wonderful sharks or their counterpart lead actors.

Chris CReviewed in the United States on December 1, 2018
1.0 out of 5 stars
Look elsewhere for the 3D version
Verified purchase
My rating is based solely on the Amazon release of the 3D version, not the content itself. $30 for a single disc with the 3D version and the digital copy. No 2D Blu-Ray included as with other vendors. It's bad enough that the few 3D releases that still come out often have downgraded audio compared to the 2D or 4K releases but now Amazon is shipping half the product at the same price as seen elsewhere. A digital copy is no replacement for a 2D Blu-Ray. The picture is noticeably inferior to a 2D Blu-ray and does not provide lossless audio. In this case the 3D Blu-ray had 5.1 DTS HDMA while the 2D release gets Dolby Atmos. There are no extra features since this is just the 3D disc. The regular 3D release carried by other vendors includes the 2D disc as well at about the same price.

The 3D disc itself is fine. There is a good sense of depth, especially in the underwater sequences. Excellent detail and black levels throughout. The 5.1 soundtrack is solid but it would have been nice to have had Atmos. Worth checking out for fans of 3D.
11 people found this helpful

M. G WatsonReviewed in the United States on June 20, 2020
2.0 out of 5 stars
All hail China!!!
Verified purchase
I watched this movie because it's "free" on Prime and I was in the mood for a mindless monster movie. Unfortunately it began at my lowest level of expectation and, excepting a few moments when it managed to reach the surface and thrash around a little, sank like a stone into an abyss of cliches, bad dialogue, stock characters, CGI and pro-Chinese propaganda. The movie even ends with a picture of the Communist flag fluttering in the breeze. I'm hardly one to bring politics into entertainment on a whim, but the soft-soaping of the appalling Chinese regime is so blatant in this movie as to actually be insulting.

I won't waste time on this trash by breaking it down into particulate matter. Basically, if you've seen "Deepstar Six," "Leviathan," "Deep Blue Sea," or the 2010 version of "Pirhana" you've already seen this flick. Almost absurdly diverse group of deep sea explorers funded by morally ambiguous billionare discovers thriving ecosystem in the ocean's sub-basement near the Chinese coast. Accidentally releases 75-foot killer shark Megalodon into our ocean. Stranded crew of mini-sub requires troubled, haunted loner-hero who left rescue profession under a cloud to come out of retirement and save them. Loner-hero must redeem himself while saving ex-wife, pursuing new love-interest, and battling mega-shark. Mega-shark eats various lesser characters and then heads for the beach to slaughter Chinese bathers...unless hero and surviving lesser characters can stop it! Etc and so on. Do I object to the recycled plot? No. It's a monster movie. I object to the fact they spent $140 million on a movie whose script is so sodden with cliches and limp stock characters (most of whom are suspiciously good-looking) it's like a bowl of week-old cereal. I object to the waste of Jason Statham, who is a better actor than he ever gets a chance (or gives himself a chance) to play, and especially Rainn Wilson, who seems to be under-exerting himself out of sheer embarrassment over the script. But I mostly obect to the crass and repeated attempts to present China in the most flattering possible light when we all know it's a horrific tyranny about a half-step better than North Korea. Hollywood's pandering toward this gulag-state is so utterly without scruple or dignity it makes my colon clinch.

I won't say there are no worthwhile moments in this all-CGI, all-the-time monster flick, but they come at long intervals and not nearly often enough to save this trash from the garbage can where it belongs. This film is living proof that the bigger the budget, the less effort is made to actually produce a decent movie. It's all about the first weekend cash-grab, baby! If you want a mindless, silly horror movie about flesh-eating fish who rise from an undesea tomb to eat hapless bathers, watch 2010's gory, T & A-laden "Pirhana," which is at least funny and refuses to take itself seriously.
5 people found this helpful

StuckInTheMiddleWithYouReviewed in the United States on November 13, 2018
5.0 out of 5 stars
Outstanding!!!!
Verified purchase
Great movie to have fun and just detach. You never know.....could still be out there....

I thought the funny part is the joysticks they used in the minisubs were X55's...made by saitek. You can even see the brand name on the side. They're a computer joystick and throttle I use for Xplane and other flying games. Pretty funny to see them make their movie debut. They are real enough, no doubt there. Probably the best joystick/throttle combo out there on the market. Well, take the back, they actually came out with a new model, the x56...exact same thing, just different colored knobs.

H. RossReviewed in the United States on November 17, 2018
3.0 out of 5 stars
worth a rental if you are bored
Verified purchase
Watched it mostly because I quite liked the original Jaws and also Deep Blue Sea... was hoping for a bit more science (didn't get it) and was looking forward to seeing Masi Oka (he's barely in it) and Rainn Wilson. Jason Statham can't act (as usual), although that doesn't seem to stop him from getting cast in mediocre films. Sophia Cai is adorably cute throughout... and most of the characters are generally likeable. We barely get to see the high tech Mana One research facility and, while I like watching Rainn Wilson being an obnoxious prick, I could have done with a little more screen time being devoted to wowing me with smaller scientific discoveries. The suggestion of a budding romance was gross, unnecessary, and very unbelievable given that Li Bingbing is gorgeous and unlikely to be impressed by a balding meathead with a goofy grin.
6 people found this helpful

DjReviewed in the United States on November 10, 2018
5.0 out of 5 stars
Fun and Action!!
Verified purchase
Enjoyed The Meg very much! It had just the right amount of humor and action to keep my interest.

I was happy to see that there was more action than gore. It builds up smoothly and was fun. I also really enjoyed the humorous interactions between Jonas (Statham) and the little girl, Meiying!!

People do get gobbled up, it is a giant shark film after all!
4 people found this helpful
See all reviews
Back to top
Get to Know Us
Make Money with Us
Amazon Payment Products
Let Us Help You
EnglishChoose a language for shopping. United StatesChoose a country/region for shopping.
© 1996-2022, Amazon.com, Inc. or its affiliates