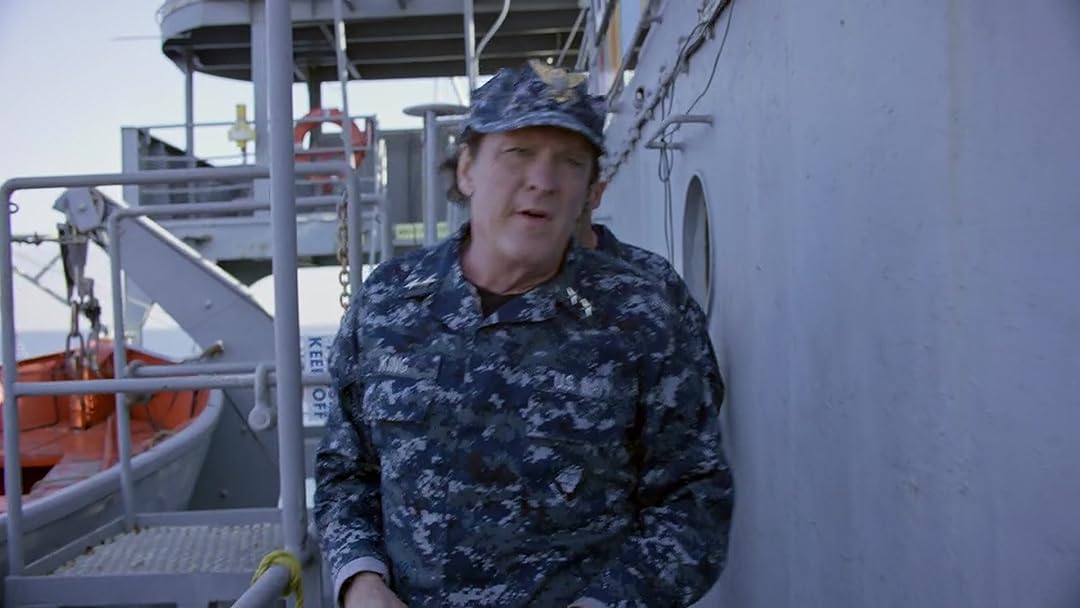 (817)
2.81 h 28 min2018X-Ray13+
A military vessel on the search for an unidentified submersible finds itself face to face with a giant shark. Forced to use only what they have on board, the crew has to defend themselves from the monstrous beast.

KAM2Reviewed in the United States on November 11, 2018
1.0 out of 5 stars
DO NOT WASTE YOUR MONEY!
Verified purchase
I can not say enough as to how bad this movie is! Michael Madsen, cut your damn hair if your gonna play an Admiral! Down periscope had more brains! When they cut to a far shot of the ship it literally looks like a cheap gray model of a fishing boat. Its hilarious!! Now they are trying to catch the megalodon using axes as a hook tied together with some cheap steaks as bate! HA!! I paid for it so Im gonna finish watching. I had to give it one star. I really give it negative 5 stars. Ok now I'm sick I paid 4 bucks for this movie.
40 people found this helpful

Jack ChaiseyReviewed in the United States on May 20, 2019
1.0 out of 5 stars
If you have no clue about anything, this might be a movie for you...
Verified purchase
Best scene in the movie starts at 1:10:43 as the Captain is watching the Commander walk away. Keep an eye on the water for the movie's best actor... The seal swimming by & grabbing a breath of air.
Completely clueless of military standards. Everyone saluting indoors. Wearing uniforms that are too tight, too loose, & with incorrect patches. Calling the sailors "soldiers." Couldn't afford to pay Michael Madsen to trim his hair or the galley cook to shave so they might look close to within regulations.
Science? Maybe the consultant was a Flat Earth Society member...
Filming location must be a maritime museum ship of some sort. There are cards on the walls & signs that would not be on an active naval ship. There are fans, radios, & other equipment that you can clearly see cut power cables on as well as electrical sockets that were added after the ship was made into an exhibit.
The actual USS Shaw (DD-373) was a Mahan-class destroyer, Shaw was decommissioned in October 1945 & sold for scrap in July 1946.
As "Admiral King" (Michael Madsen) addresses the crew of the USS Shaw (0:6:20 into the film) you can see the reflection in his aviator sunglasses showing that where the crew was standing is empty when he's speaking.
The Captain is constantly doing "parrot exposition." A type of exposition in which one character repeats another, pressing them on something they just said. This happens repeatedly, making one of them look knowledgeable & the other clueless. Or it can be simply annoying. That guy's job is to repeat everything he says like he doesn't believe it.
The CGI shark looks like something drawn by my 3 year old.

David K. KyleReviewed in the United States on November 16, 2018
1.0 out of 5 stars
The Asylum.
Verified purchase
Thought I was ordering the other Megalodon film. Couldn't stomach it for more than 20 minutes. Speaking of stomachs, what's with the fat seamen, and the ones who refuse to obey orders. Not to mention the Hippie Admiral. The dialog will want to make you scream because of the stupidity. I only gave it one star because I am sure they did a decent job on the end credits. That's just a guess because I didn't want to waste anymore of my time on this "film" except to warn people away from it.
35 people found this helpful

GreystokeReviewed in the United States on December 3, 2019
1.0 out of 5 stars
Step Away From The Chalupa! NOW!
Verified purchase
I couldn't do it, just couldn't although I tried.
I made it half way through before I threw up in my mouth and had to abort the mission.

As a former 'Nam era USN Sailor, this movie is wrong on so many fronts, it simply beggars the imagination, even for a SyFy movie production.

I like cheesy, horrible, terrible plot, lousy acting B Movies as much or more than the next guy (or gal), but this is just wrong.

The writers, directors and actors are all from an alternate universe or have taken steroids and heroin for so long they're no longer able to think coherently.

Beyond calling sailors "soldiers", using a Morse code generator to communicate with a diving bell and not one of the various officers having the correct insignia on their uniforms, there is no part of this movie with a connection to the Fundamental Laws of the Universe.

Up is down, and a Lie is Truth.
And the truth is, if you try to watch this movie, it will literally kill brain cells in yours and your neighbor and your neighbors cats head, permanently. I have chickens who are smarter than the people who made this film, and the chickens lay eggs making them more useful too.
14 people found this helpful

Linked Universe Discord Movie ClubReviewed in the United States on June 5, 2021
5.0 out of 5 stars
With All Due Respect Captain, They Just Got Eaten By A Shark
Verified purchase
Honestly the shark was not in this movie very much. However he was very lumpy and good.

This movie actually kinda came for our knees in the second half! We could do without the pro-military propaganda but like man we actually had feelings for the characters! We were sad when Captain Man gave command to Lynch! We remember their names for once!

Excellent characters, actual (un)realistic valuing of human life (in an Asylum shark movie???? Unprecedented!), and pretty solid acting and writing! Very refreshing. Also, there was a meat ladder. Their first plan was literally a ladder with meat and axes attached to it and electrified. That's absolutely iconic.

Sndtrk3000Reviewed in the United States on November 18, 2020
4.0 out of 5 stars
Megalodon
Verified purchase
Review of Megalodon with Michael Madsen. Not a top quality production but for whatever budget they had, I really liked come things. Decent story. Many ethnic and female actors were in this, with "positions" and were treated like everyone else. They had skills that were demonstrated, respected and used, for the survival of the crew. The crew didn't have jerk soldiers, accept Michael Madsen and the enemy. I didn't "notice" any swearing nor lewdness. I saw no actor, I thought did a poor job. They were as good at pretending, to be someone they are not, as any other actor does or should. I liked the Meg but it was too short. This offered more of a story. Few films with a budget cost under one million dollars, like John Chos film "Searching" or "Monsters", will become umpteen million $ hits. I've read a couple complaints. I agree with some. There were flaws I did not like but I'm sure the low star viewers covered enough so I won't. The biggest films of all time have mistakes. A friend or family member who knows what you like may be your best help, before a stranger if your not sure of a film. Why trust someone who says, I hated it. I quit watching it 10 minutes in. Don't you watch it. That is not advice, that is someone attempting to control you to their beliefs.There are some who watch it all, then bashes all of it. For you. Before accepting, someone thinking for you, remember that every comment made, can program your mind into accepting thoughts that will cause you to like or dislike the film. Some, can give a decent review without manipulating you or ruining the film for you by saying too much. Some want to twist your mind, to their beliefs. I think of them, "My thoughts are not your thoughts, neither are your ways my ways". Judge for yourself. Finally, did the reviewer "mention" the title, on the page that says, "Megalodon" or show a photo of it in their review ? If not, their review may, be of another movie "or product" that is listed on another page. Amazon does not read minds. Amazon also does not correct mistakes, theirs (that I've seen), nor reviewers. Some of us have caught and mentioned many flaws. 11/17/2020
One person found this helpful

Amazon CustomerReviewed in the United States on March 14, 2019
3.0 out of 5 stars
Ok movie
Verified purchase
I read the reviews and was surprised. I love shark movies but was very put off by the Sharknado movie which was total fantasy and bogus...which this is quite not the same in this movie. Everything went all right, made sense, all that. Yes, I agree that Michael Madsen should have been a more realistic admiral - long hair? Come on. I felt this movie focused a little too much on military politics between the American Navy and Russian military than the shark. I feel it should have been more about the shark. The temp female captain swam back to the ship and did not get eaten? No wonder Megaladon was extinct because she should have been eaten. There are scenes from the original Jaws movie which I found cute - the raw beef bait, the ramming on the ship and tearing through the hull, etc and the bomb. I agree that the dialogues could be trimmed or more interesting hence 3 stars. I've seen shows with worse dialogues than this one. If this were Sharknado, I would give it just one star but this one, it deserves more than one star.
6 people found this helpful

John GarganiReviewed in the United States on January 3, 2021
1.0 out of 5 stars
No Excuse to be THIS mind numbingly BAD!!!
Verified purchase
Hellooooo....This is modern times where Americans and Russians share time on the Space Station, right? But in this movie, you would swear that WWIII had already begun and they were sworn enemies: two of them, BTW, good enough to almost take over a battleship! LOL........

I won't even get into the things already covered in the reviews: Madsen's "haircut", the CGI "shark", choppy editing, ridiculous dialogue, totally fictitious naval conduct and routines.....forget all that.....

Phony Russian accents....horrible script and acting.......let's see, what did I leave out? How about the Russian commander with his hands tied behind his back killing an armed Naval "soldier".....the shark sticking his nose through the ship in the end and no water cascades with it into the ship, giving Madsen time to talk to it? Automatic weapons that easily fire 50-100 rounds, missing a man when you fire point blank at him....did I leave something out?

Again, no excuse....I feel sorry for people who paid directly for this....was available free on Prime when I suffered through it.
One person found this helpful
See all reviews
Back to top
Get to Know Us
Make Money with Us
Amazon Payment Products
Let Us Help You
EnglishChoose a language for shopping. United StatesChoose a country/region for shopping.
© 1996-2022, Amazon.com, Inc. or its affiliates