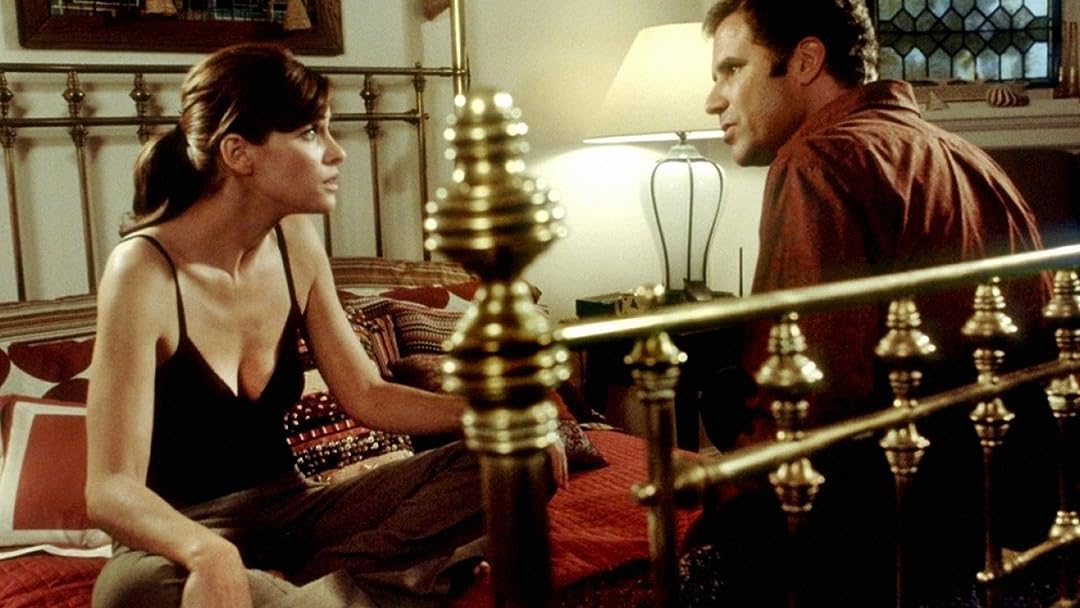 CordeliaReviewed in the United States on June 8, 2016
5.0 out of 5 stars
Will Farrell an amazing surprise
Verified purchase
Usual neurotic characters doing the stupid things we all do, but with Woody Allen panache, flair and lack of consequences. The real reason to watch this film is Hobie, Will Farrell's character, played with dry hilarity to the point of brilliance.

On first viewing you won't even notice all his lines, lost in the main stories. But watch it again; Farrell's role, which at first seemed superficial, is beautifully developed. His lines are just as funny as any of Woody's funniest ever, and given in a witty manner. The delivery is not stereotypical or bold. Throw-away lines become subtle social and aesthetic commentary. King Lear with a limp, one realizes, could be great. With each viewing (and I rarely view movies twice, and this I saw 4 times) we were laughing and laughing. Thank God the actor Allen wanted for this part was not available.

Small note: Is Allen slipping in his old age, or was he just playing at being a cultural savant all along? I would take issue with his views on opera, the Sistine Chapel, Harlem, Raphael and yellow sweaters. Just sayin'...

F. S. L'hoirReviewed in the United States on September 6, 2011
4.0 out of 5 stars
Woody and Woody!
Verified purchase
Or Woody vs. Woody?

The Either/Or Proposition, in which there is no middle ground, is usually considered a fallacy, but Woody Allen, like many major political figures, is a lightening rod of controversy, as many of the reviews here indicate: one either loves him or hates him. There is very little in-between!

I count myself in the former group, but I can certainly understand those who count themselves in the latter. Woody Allen, who--with the aid of his brilliant casting director, Juliet Taylor--has assembled his usual ensemble cast of talented actors, makes films according to his own criteria, rather than according to that of some Hollywood focus group. Consequently, his films occupy a category of their own. As an author-director, Woody Allen has travelled well beyond the point of worrying whether his movies appeal to the public or not.

"Melinda and Melinda," which explores the nature of tragedy and comedy, is probably too intellectual for its own good (It would not be out of place in a university course--not only drama and film, but also philosophy and classics). The film is bursting with talent--including the two Melindas, British actor Chiwetel Ejiofor (whose American accent is impeccable), and Will Farrell, who delivers canonic Woody-isms with aplomb. The cinematography of New York conveys an undeniably nostalgic and even a melancholy charm.

Although I liked the premise of tragedy and comedy converging in life (depending on one's point of view), I found the film's structure to be problematic; repeatedly asking myself, "Now which Melinda is this? What is her story? Who are all these other characters?" In other words, at times the boundaries of narrative became so blurred that I had difficulty distinguishing the individual facets of the two plots. I do, however, look forward to watching this well-acted film several times, but I certainly empathise with viewers who have neither the time nor the patience to do so.

Woody Allen brings to mind a delightful old saying told to me by a German friend: "Does the Moon notice when the little dogs bark?" Woody Allen is clearly the Moon, and we, his critics, are the little dogs. Whether we bark or not, he will continue to make films according to his own standards. And I, for one, hope he continues to do so for many years to come.

StutzReviewed in the United States on December 27, 2013
5.0 out of 5 stars
Fantastic fun
Verified purchase
I loved this movie. I read a number of negative reviews of this, and think they missed the point. I think the reviewers were expecting some sort of deep meaning to the movie. This movie struck me as a light-hearted, honest experiment. It starts with a short, common storyline/character, then splits into two stories, one comic, one tragic. These two stories weave back and forth. Woody Allen keeps the actress portraying the common character the same throughout the movie, and uses different actors for the comic side and the tragic side. I thought it was brilliant, and very fun.

I also think Will Ferrell did a great job with the Woody Allen neurotic persona. It seemed to me his lines were clearly Woody Allen, but the expressions and reactions were Will's.
2 people found this helpful

B. MaroldReviewed in the United States on December 8, 2005
4.0 out of 5 stars
Excellent little work. Better than some, not his best.
Verified purchase
`melinda and melinda' is a standard Woody Allen written and directed seriocomic essay in human relations. It is good, but not as good as his very best, such as `Hannah and Her Sisters' or `Crimes and Misdemeanors'. Herr Professor Allen's conceit in this film is set up in a conversation of four friends over wine at a Manhattan bistro, where two of the four friends are playwrights discussing the premise / first scene of a plot. One writer interprets the situation as a tragedy and the other interprets the situation as a comedy.

The remainder of the movie plays out the two different plots with a single actress, Radha Mitchell, playing the central character, Melinda, in both the comedy and the tragedy. Unlike a similar scenario in the famous Kurasawa movie, `Rashoman', the two interpretations are not different ways of seeing the same events. The plot in the two threads diverges markedly after the initial arrival of Melinda at the dinner party of two completely different sets of characters.

Unlike most of Allen's other movies, this cast is not packed to the gills with famous names and faces itching to appear in one of the Woodman's films. The only three actors who I recognize by name or face are Will Ferrell, Amanda Peet, and Allen regular, Wallace Shawn. Woody doesn't even appear in the movie himself, although I swear Ferrell's lines and personality were written for the stock Woody Allen nebbish character. Even though Ferrell looks much more like the character typically played by Tony Roberts in earlier Allen films, in this work, the tall guy with the short curly hair is the out of work clueless character, being supported by his wife in her job as a film writer and director.

Another twist which raises the story above the mundane is the fact that the two story lines are neither purely comedy or tragedy, although the comic story, woven by Shawn and starring Ferrell does end on a happy note, while the tragic story line does end unhappily, albeit not in total tragedy as you would understand that term as applied to `Macbeth' or `Hamlet'.

On the back of the CD case, Rolling Stone is quoted as saying that `You'll laugh till it hurts'. Well, I didn't even laugh once. That doesn't mean I didn't enjoy the movie. The charm and the humanity of the performers in playing out Allen's ideas was well worth the price of admission. Another blurb declares that Ferrell delivers a `laugh out loud performance', making it sound like his performance in `Elf'. Ferrell committed himself much better in this movie than in his more slapstick / comic strip efforts in recent movies, proving to me that he is as good an actor as people have so often said he is. This may very well be my favorite Ferrell performance since his appearance in Kevin Smith's `Jay and Silent Bob Strike Back'.

This is not Allen's best effort, although it may be his best among his last few outings. It is also not quite as crisp as, for example, `Sideways', one of the few intelligently funny movies other than Herr Doktor Allen's works lately. But, as intelligent, adult entertainment goes, this will tide me over until Woody produces another `Manhattan'.

Christopher AlexanderReviewed in the United States on May 11, 2014
4.0 out of 5 stars
A Decent Watch
Verified purchase
This isn't Allen's greatest movie, but it's not his worst. The acting is very good and the script/movie is typical Allen.

This is not a movie for those with ADD or for people who have difficulty mentally multi-tasking. Though it only goes between two main story lines (well, 2.5), it does require you to pay attention and focus.

Most of the actors/actresses are familiar, as we have seen them in other movies. This actually helped me to keep track of who-is-who, as the movie shifted around a bit.

This is not a 'keeper' or watch-again, but I got my $4.00 worth. If you like Allen movies you'll probably like this one.
One person found this helpful

Roy ClarkReviewed in the United States on January 13, 2006
3.0 out of 5 stars
Obviously, this's a love-it-or-hate-it film . . .
Verified purchase
Some viewers/reviewers think this's too much the standard W.Allen movie and others think it's not enough like what W.A. has done before. I give it stars for a great film maker trying something different and reducing stars for not quite making it.

This is Maestro Allen's most good/bad film. Parts worked, other's didn't. Still it was of course better than most such flicks by mere mortals. Maybe it will work better in re-viewing; perhaps the confusions of Melindas will become less distracting and W. Ferret will seem not to be doing a lame version of W.Allen. Whatever, the movie swings from incomprehension of and grimaces for the plight of its characters to chuckles at their mishaps and human failings.

Three stars for the movie: Five stars for it being a, but not-quite successful, experiment from W.Allen; minus one for casting Ferret and minus one more for confusion and lack of expected W.Allen grace, sophistication and originality = 3.
3 people found this helpful

KGReviewed in the United States on July 8, 2010
4.0 out of 5 stars
Even just 'good' Allen is better than most
Verified purchase
An interesting experiment: telling the same story, intercut, in both comic and serious versions. Lots of striking moments, and some good acting (although Will Ferrell - as much as I'm a fan - trying to be `serious' didn't really work for me). Also, the bookend device setting up the idea (two writers talking at a restaurant about the differences between comedy and tragedy) is clunky and a little on the nose.

Still, a worthwhile attempt to look at how we tell stories, and by extension how we look at life. Allen's later films may not quite be at the level of his early work, but you gotta admire a filmmaker still trying to look at the big questions 40 years into his career.
See all reviews
Back to top
Get to Know Us
Make Money with Us
Amazon Payment Products
Let Us Help You
EnglishChoose a language for shopping. United StatesChoose a country/region for shopping.
© 1996-2021, Amazon.com, Inc. or its affiliates