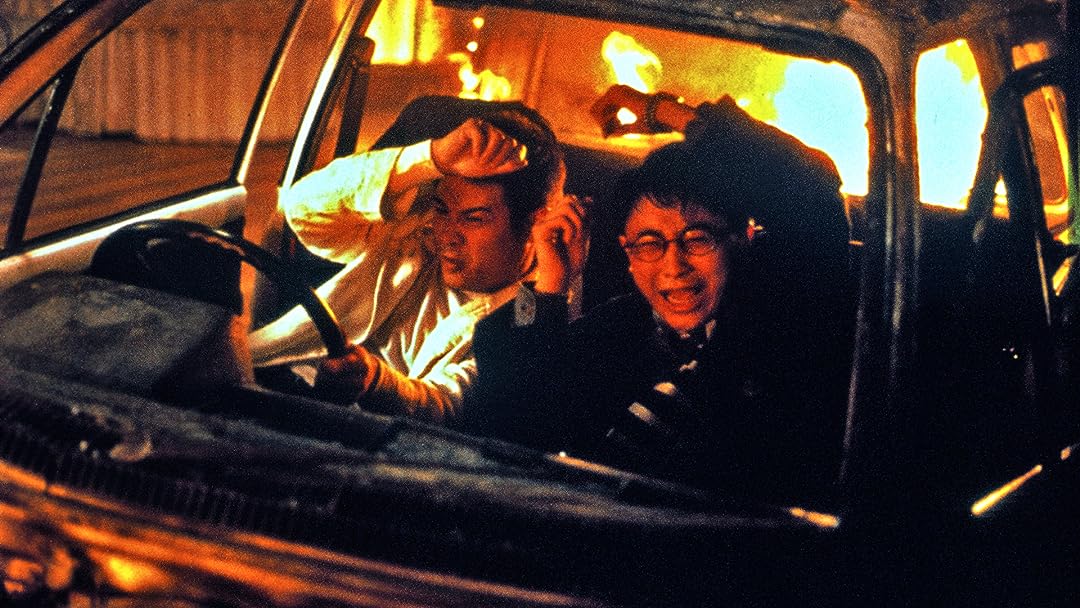 (100)
6.11 h 40 min1995R
After failing to save his wife from 'The Doctor', Kit Li begins working as a bodyguard and secret stunt double for the cowardly martial arts film star Frankie Lane. Frankie attends an exhibition of the crown jewels of Russia at a Hong Kong hotel, and when The Doctor's gang take over the building in attempt to steal them, Kit is the only thing standing in their way.

H. BalaReviewed in the United States on February 4, 2007
3.0 out of 5 stars
"Alright...I'm trapped in a building taken over by terrorists. Where have I heard that before?"
Verified purchase
How great of a film is DIE HARD? DIE HARD left such an indelible mark in cinema that movie producers all over the world have been rehashing its film premise ever since. MELTDOWN (aka SHU DAN LONG WEI, aka HIGH RISK), released in 1995, is only one film of many which blatantly [...] Bruce Willis's action opus. On its own merit, MELTDOWN isn't bad but isn't near the top of Jet Li's best flicks in terms of acting, storyline, or kung fu throwdowns. What it's got going for it is its infusion of mayhem and graphic violence, so if you're into that (and what dude isn't?), then it's good times for the viewer.

The far-fetched plot: A deadly early encounter with a terrorist mastermind simply known as the Doctor leaves military Lieutenant Kit Li (Jet Li) a widowed man feeling guilt and in search of revenge. Two years later, Li is now toiling away as a bodyguard to crass, world-renowned kung fu movie star Frankie Lone (Jackie Cheung), who much like Jackie Chan, insists on performing his own stunts. But, unbeknownst to the public, Li actually also serves as Frankie's stunt double on occasions when Frankie has had his drink on. Frankie used to be a heralded martial artist but has "forgotten" the wushu way and is now basically a craven womanizer.

When the posh Grandeur Hotel hosts an invaluable set of Russian jewels, it becomes the point of convergence for Kit, Frankie, and the Doctor and his gang of terrorists. Kit, at last, has a chance to atone for his blunder two years ago. Can he find a way to overcome the mastermind's cunning and ruthlessness? And can Frankie find his long-missing kung fu? Will the plucky girl reporter find love with Kit? Will the dubious film director be defenestrated? Can Jackie Chan forgive MELTDOWN for making a caricature of his persona?

I don't recall the ratio but it seems to me that Jet Li wields a gun here more than he resorts to chop socky. The action sequences are still dang tootin' nifty, but I guess the producers really were going for that DIE HARD sensibility, ergo more firearms. Jet Li remains a very likable persona and his performance is pretty good here as he plays up the stoic, heroic role. As for Jackie Cheung - you either like his performance or you want to slap him silly. I got very annoyed with his incessant mugging and I personally didn't think he was funny, but I know friends who did. His character was meant to be a spoof of Jackie Chan and Bruce Lee, but I didn't much care for it.

Too, the editing staff should've been canned for the inconsistencies left in. There's a scene in which Frankie uses a shoe as a decoy, but the very next moment reveals Frankie shod on both feet. How Kit and the cop got the car out of the elevator to pull out a surprise on the terrorists is a mystery to me. There are several "people" falling out of the skyscraper who are too obviously fake dummies. See what I mean?

Now, I saw MELTDOWN on dvd, dubbed in typically over-the-top English. I just wished I'd screened it in the original Chinese or Cantonese. As I've said elsewhere, more often than not, foreign movies lose something in translation. There's a chance Cheung wouldn't be as grating if he was presented in his native lingo. But, overall, despite its annoyances, MELTDOWN is worth watching for its crazy stunts and fierce violence. And for Jet Li, of course.

M. LaReviewed in the United States on June 29, 2019
4.0 out of 5 stars
So bad it's funny, intentionally.
Verified purchase
Funny stuff. Good action scenes at the end.

ConleyCReviewed in the United States on November 7, 2015
2.0 out of 5 stars
The English Dubbed Cut version doesn't help an already crappy HK Jet Li Movie.
Verified purchase
Nevermind the edits that Tri-Star and Columbia/Sony went and did to the movie, it wasn't a very good movie to begin with. Titled High Risk and released in 1995, the Jet Li action vehicle from notorious Wong Jing, is a basic attack on Jackie Chan. Yes, the whole plot is a by the numbers Die Hard plot that was also basically the plot of City Hunter basically and that was a better movie.

Wong seems to be firmly in a hateful mood with this movie, his characters act hateful, especially the bad guys. Resulting in the movie being less charming than his other better movies like God of Gamblers and yes City Hunter. Part of the movie's problem is the basic need and want to attack Chan venomously, though it does ultimately give him redemption. It still can't shake the utter contempt that seethes through it with scene after scene of showing the fake Jackie Chan parody be a coward and not doing his own stunts, chase women, scare children in the bathroom.

Meanwhile we have the rather dark Die Hard Clone with Jet Li going on. With the beginning of this movie pretty much setting up that Jing is not in a rather particularly nice mood or maybe it was the writers mood. The whole blowing up a bus full of children including Li's wife and child is rather dark for the opening to this action/sort of comedy. But you learn that a lot of dark stuff gets thrown left and right in this movie, the mood whiplash is heavy with comedy scenes being led into dark action scenes and Billy Chow's character who is an insane in the membrane fan of Not Jackie, I mean Frankie Lone.

And since we couldn't have Chow repeat a fight with Li, since the legendary Fist of Legend bout they had, he gets stuck fighting it out with Not Jackie (Ok, the actor playing Not Jackie is rather a good actor, Jackie Cheung, famous for Tiger Cage and Bullet in the Head, As Tears Go By, Days of Being Wild and he gives a great performance,better than this material deserves) for the character to have some semblance of a character arc of redemption.

Jing obviously had a very nasty falling out with Chan during the making of City Hunter and it obviously shows in this movie that Jing is not letting some things go. And is poking fun at Chan nearly too much, to the point of ridiculousness. He even makes rather negative references to Chan's current projects of Rumble in the Bronx and First Strike even, though it was in the process of being filmed. Meanwhile Jet Li is battling the evil terrorists of Criminal Mastermind "Doctor" played with hammy relish by Kelvin Wong who played a another bad guy in that same years Sammo Hung misfire Don't Give A Damn as the Japanese crime lord Yamamoto. He spends way too much time playing the Asian version of Hans Gruber times 10, blowing a bus full of children up, killing innocent people during what was suppose to be a normal Jewel Heist that quickly spirals out of control into a hostage situation. I take it back, he's even more careless than Hans Gruber, he's really just a sociopath bumping people off left and right. He's also got his own little personal gang of psychopathic terrorist clowns that include Billy Chow as a weirdo insane fanboy. Plus in their off time the bad guys read porn magazines like Penthouse, Hustler, and you have to laugh.

Thankfully, Jet Li gives him a nasty comeuppance at the end. This is all fine, the action, the Jewel Heist story line with the Die Hard rip-off, all of it is ok, but the Jackie Chan pot shots are so annoying and clog the movie down and give the movie terminal whiplash. Plus, they get cruder and cruder, the bathroom scene being the worst.

It seems kind of fitting that Wong Jing ultimately kind of lost this bout, that same year Rumble in the Bronx did really well, as did First Strike the next and finally Mr. Nice Guy, Chan did Rush Hour and became even more of an international star, and Wong just kept to what he knew when it came to making movies that worked in HK moviehouses. And also Jet Li would move beyond this movie as well, doing My Father is A Hero the same year, a way better movie and Black Mask the next. Li would also work his way into the outside world. Something that Jing obviously holds contempt for by evidence of this movie, and it's rather ironic. In some ways I think Jing envied Chan's fame outside of the HK market, but it's more than obvious that he and Jackie had some deep unseated issues after City Hunter.
2 people found this helpful

ChadReviewed in the United States on June 30, 2019
5.0 out of 5 stars
Good one
Verified purchase
I love the line "Sammo is better!!" lol

Catalina Reviewed in the United States on December 31, 2019
5.0 out of 5 stars
Lots lots of action
Verified purchase
Lots of action

Anna FilipovaReviewed in the United States on May 26, 2019
5.0 out of 5 stars
Great
Verified purchase
Great movie but not that impressive as Jet Li's others.

VdawgReviewed in the United States on September 9, 2018
5.0 out of 5 stars
Five Stars
Verified purchase
good flick

AngelReviewed in the United States on June 24, 2018
5.0 out of 5 stars
Loves it!
Verified purchase
My son loves his gift.
One person found this helpful
See all reviews
Back to top
Get to Know Us
Make Money with Us
Amazon Payment Products
Let Us Help You
EnglishChoose a language for shopping. United StatesChoose a country/region for shopping.
© 1996-2022, Amazon.com, Inc. or its affiliates