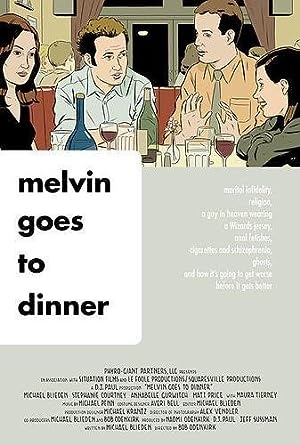 (41)
6.81 h 23 min2009R
Award-winning comedy about a lonely young man who finds himself at a restaurant with two strangers and his best friend.

Todd J. LampeReviewed in the United States on July 28, 2021
1.0 out of 5 stars
Movie is great, but no extras were included
Verified purchase
I loved the movie, and when going back to review the extras (commentary, extra features, etc.) there was NOTHING else on this disc, and I searched in every way possible. Is this a printing error or is this just the way it is now? They are clearly listed on the back sleeve of the DVD cover so it is really disappointing.

ItChangesReviewed in the United States on March 29, 2016
3.0 out of 5 stars
Entertaining for One Viewing
Verified purchase
I have to watch a lot of different types of films for business purposes. And yes, I'm "old" and am used to films and stageplays having more structure than most do today, but with the new cheap indies and mumblecores, I'm almost afraid to watch anything anymore. What a relief that Melvin Goes to Dinner was better than most.

The cast is solid and everybody stayed in character. There were a few glaring mistakes, but they're forgivable. I had to stay focused because there are no balances in the film, but the non-stop chatter was actually fun. For one viewing.

There's not much of a story here and Sundance, I'm sure, would have been the only festival to even acknowledge that this film existed, but it's better than most of its genre.

Tim LukemanReviewed in the United States on August 22, 2011
4.0 out of 5 stars
Appetizing & satisfying - 4.5 stars
Verified purchase
Let's dispense with any unfair comparisons to "My Dinner With Andre" right from the start. Of course it's not that wonderful film! But that's not a bad thing, because while "Melvin Goes to Dinner" utilizes the same basic format, it quickly goes in its own direction. The characters are smart, witty, not uncommon people -- we know them, or people very much like them -- and their emerging problems are more immediate. If their existential questions aren't quite so Olympian in stature, they're still pressing & painful & eventually cut quite closely to the bone.

Add to that the humor of the conversation, the sense of going out on increasingly fragile limbs, and you've got an offbeat film that's both intelligent & marvelously entertaining. Even better, it'll get you thinking, and might even lead to some fruitful conversations of your own. The DVD also includes some enjoyable extras & commentary tracks, making this a film worth owning & watching more than once. It does have some rough edges, both because of a limited budget & the fact that it's a first effort for the filmmakers; but don't let that stop you from giving it a try. Recommended!
One person found this helpful

Lake AustinReviewed in the United States on February 8, 2008
5.0 out of 5 stars
My Take On 'Melvin Goes To Dinner'
Verified purchase
I first saw this movie on cable (ShowTime). I just caught the last 30 minutes or so. I was so intrigued by the portion that I saw, I had to get the DVD. You probably won't recognize the actors or the producers names but the entire project is well done. It contains some adult situations (in the language) so this is something you may not want your kids to watch. The 'film' (it was done mainly with digital cameras) was adapted from a play that ran for more than a year in LA and the producers decided (quite against the grain of Hollywood thinking) to actually use the main actors from the stage production. The result is you will be artfully and masterfully entertained as you watch. Might this movie define a voyeuristic experience ? Michael Blieden wrote the stage play, wrote the screenplay, was one of the key actors, and was responsible for the editing of the movie production. Bob Odenkirk (Emmy award writer for Saturday Night Live and the Ben Stiller Show) directed the movie and was one of the main driving forces in financing the movie. His wife, Naomi Odenkirk (a well known Hollywood talent agent), along with D.J. Paul and Jeff Sussman used their resources to convince other talented actors to do cameos and participate in this movie production as well as to put their own 'good money down'. I won't even tell you the premise of the movie. View it for the talented piece that it is and for the 1000's of hours of effort required to give it life. You will be amply rewarded !

cookieman108Reviewed in the United States on March 3, 2004
3.0 out of 5 stars
"I fell off my pterodactyl..."
Verified purchase
Directed by Bob Odenkirk (native of Naperville, IL, right around the corner from me) of HBO's Mr. Show (1995) and based off a play written by Michael Blieden, Melvin Goes to Dinner (2003) is a movie...well, as George Constanza from TV's Senfield might put it, about nothing. Really...nothing happens...four people come together for dinner and different topics of discussion arise, religion, marriage, infidelity, sex, ghosts, among other things. The movie forms around what is supposed to be spontaneous conversation, and has various flashbacks intertwined to help develop the characters. The film succeeded, but main problem I had was with the characters in that I just didn't like them very much. They really weren't people I'd be interested in knowing or spending time with, but I continued to watch, and even managed to enjoy myself. One thing I noticed which rang true to me was how easy it can be at times for people to relate really personal information about themselves with absolute strangers, while having difficulty doing the same with people they have closer relationships, like spouses or siblings.
There were some great cameos by David Cross (as a motivational speaker) and Jack Black, who really made me laugh as a lunatic in a hospital talking about how he was 'the Creatrix' and the jealous god knocked him off his pterodactyl and turned him into a nid (a human being). Maura Tierney and Laura Kightlinger also appear. I really thought the movie would have more humor than it did, as the conversation meandered from subject to subject. It was kinda odd when the supporting cast is more well known that the starring players with the exception of the attractive Annabelle Gurtwitch, who played the character of Sarah. She used to be on that television show 'Dinner & a Movie' as a co-host and has been in quite a few movies.
Special features include a featurette about how the makers of this film accepted an invitation to the exclusive Frank International Film Festival, only to learn that the festival was run by one guy named Frank, and their film was the only movie showcased, and pretty much the whole festival took place in this Frank's mother's house, with the filmmaker's having to share a funky room with Frank's brother. There are two different commentaries available, one with the writer and the cast, and another with people involved in the production and also a copy of the script available in a PDF format. There are also like ten trailers for various Sundance Channel releases. I really wish I could give this film 3 ½ stars rather than three, but the current system doesn't allow for that (foolish system)...
Cookieman108
7 people found this helpful

robble_robbleReviewed in the United States on November 10, 2016
1.0 out of 5 stars
Acting felt more like "stage" or "improv
Verified purchase
Odenkirk is a genius, but there was something off about this. Pacing was slow. Acting felt more like "stage" or "improv." No subtlety or chemistry between the characters.I hope he keeps trying to do more personal character driven stories though.
I'll watch anything with his name on it.

Trish SwainReviewed in the United States on October 15, 2015
3.0 out of 5 stars
Thought it was getting boring, then the psychodrama emerged
Verified purchase
Thought it was getting boring, then the psychodrama emerged. Reviewing this, can't decide if it's serious or a comedy. The comedic aspect was the extreme of their self-revelations over dinner. I almost anticipated the plot twist. Off-beat film that sticks with you. David Cross was masterful in a cameo which may have been the only deliberately comedic episode. I'm a rabid Odenkirk fan, so was very curious to see results of his film direction. Left me baffled, but haunted by these characters.

cocoinmiamiReviewed in the United States on December 10, 2003
5.0 out of 5 stars
Fantasticly Funny and Wonderfully Produced
Verified purchase
Melvin Goes to Dinner had me laughing so hard. The way the director cuts between dinner and scenes of each person's life is interesting in that you have to fit the pieces in the right order and figure out what's going on. This isn't too hard to do but it is fun and leaves a bit to the imagination. I saw it at an independent theater for $3 in Cambridge, and it was worth so much more than that. Put one in everyone's stocking. They won't be disappointed.
2 people found this helpful
See all reviews
Back to top
Get to Know Us
Make Money with Us
Amazon Payment Products
Let Us Help You
EnglishChoose a language for shopping. United StatesChoose a country/region for shopping.
© 1996-2021, Amazon.com, Inc. or its affiliates