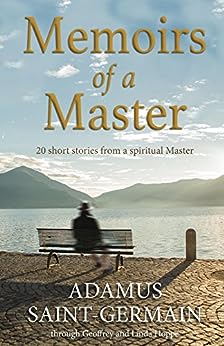 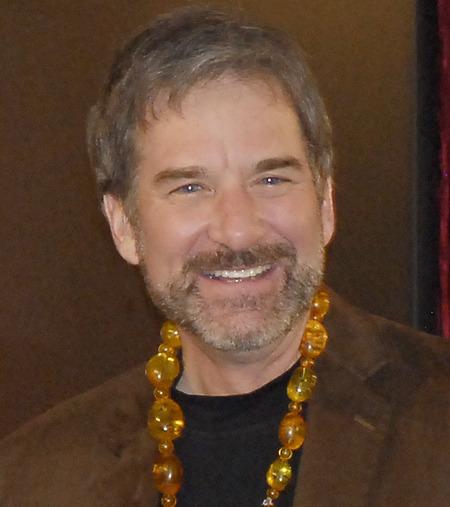 Memoirs of a Master: 20 short stories from a spiritual Master Kindle Edition

Geoffrey Hoppe: The early spiritual curiosity of a young man was all but forgotten as he served a few years in the US Army as a Public Information Specialist at the NASA Ames Research Center (Mountain View, California), and then stepped into the business world. After finding his way to senior management positions in several advertising agencies, Geoffrey started his own marketing company in Dallas, Texas at the ripe old age of 28. Later on, he co-founded an aviation telecommunications company (provider of Internet services for business jets and commercial airlines, now known as Gogo), serving as Vice President of Sales and Marketing until 2001. In a stroke of ironic prescience, Geoffrey holds three patents for multidimensional telecommunications technologies, as well as numerous trademarks and copyrights.
Linda Hoppe: A gifted artist and highly creative by nature, Linda graduated Summa Cum Laude and went on to teach Art Education, even writing a ground-breaking curriculum for Texas’ first high school honors Art Education program. Her artistic talents landed her a job as Fashion Merchandise Manager with a Fortune 500 company, helping to set the styles and designs for each upcoming season. She also served as manager for Geoffrey’s marketing consulting company for several years.
Geoffrey & Linda met in high school and got married in 1977 on the day the first Star Wars movie premiered. Twenty years later, an angel named Tobias introduced himself to Geoffrey during an airplane flight. After talking and learning together for an entire year, Geoffrey finally told Linda about his invisible friend. Soon after, Tobias started working with clients of a local psychologist, providing deep insights into past lives and current challenges.
In late summer 1999, a few friends were invited to listen as Tobias spoke through Geoffrey, assisted by Linda. It was the beginning of the Crimson Circle, an organization that they would soon spend every waking moment trying to keep up with. Since then, Crimson Circle has grown into a multinational organization, with Geoffrey & Linda traveling the globe conducting numerous workshops and events each year.
They didn’t see it coming, but looking back in hindsight, they wouldn’t change a thing in this most extraordinary lifetime. --This text refers to the paperback edition.

5.0 out of 5 stars
5 out of 5
114 global ratings
How are ratings calculated?
To calculate the overall star rating and percentage breakdown by star, we don’t use a simple average. Instead, our system considers things like how recent a review is and if the reviewer bought the item on Amazon. It also analyzes reviews to verify trustworthiness.
Top reviews

Irma Rantala
5.0 out of 5 stars A good guide on your way to Realization
Reviewed in the United States on December 1, 2016
Verified Purchase
Memoirs of a Master is a collection of 20 short stories, written by Geoffrey and Linda Hoppe, companions and channelers of Adamus Saint-Germain who now comes to us from angelic realms. This book, filled with warm humour, compassion and wisdom, is written from the viewpoint of Master Adamus who gently guides his students through many roadblocks and obstacles to Realization or Enlightenment.

Memoirs of a Master is dedicated to the Master and student within each of us. The Master is our wise inner voice, always present and compassionate, already within although often unheard. The student is the eager learner, the doubtful human, and ultimately, the Master and the student are the same, in this book as in life.

The outer context of the stories is often the ancient mystery school where the Master is teacher and student apprentice. This appeals for sure to many of those who feel drawn to mystery schools. Master and student meet and discuss many issues humans tend to have on their journey to mastery: abundance and lack of it; physical illness, mental chaos, confusion, hopelessness; stuck energies and limited vision; threatening life situations; temptations to take fast-track shortcuts; victim games; multidimensional realities; lies that people tell themselves, and much more.

These stories guide us to integrate our divinity with our humanness. Many metaphors help us form a new perspective on our life and problems. By presenting advice in story form there is no pressure to accept it but the reader is free to decide whether to change her consciousness based on this new perspective. Should she feel that the story is not relevant, nothing is lost, and she might find out the new meaning at a later date.

I truly loved metaphors in this book. One of them is “The Mothership”, representing the soul being, inspired by our intergalactic origins. “Imagine a big Mothership, hovering above your reality, and it sent down all the little pod spaceships... suddenly, the Mothership realizes it’s time to land…’It’s time to come home’.” “And the funny thing is that YOU, in this lifetime – this little space pod that is energetically the closest, the most bonded with the Mothership – is the first to return.” And then it’s you who take the lead. Another example of the many beautiful metaphors is the fire breathing dragon that once tormented you day and night but now sleeps peacefully beside the fireplace.

The park bench, pictured on the cover and at the end of every chapter, felt like a very appropriate place for the Master’s and student’s meeting. For the Master, it had become the timeless place where aspects of his past and future lifetimes would come for counsel. Sitting there with the Master, the reader easily learns the core content of aspects. On the bench the Master shares his wisdom, the student shares her issues, and both share their human experiences. It was on the park bench where the Master had his profound Realization, awareness of his awareness that came to him like a breath, easy and graceful, when he was simply present and allowing.

In this book many of Adamus Saint-Germain’s teachings are presented in summarised form. For anyone who is already familiar with them, the book serves as a valuable reminder of his core teachings, and for anyone who does not know them yet, the book might serve as a doorway to totally new worlds. If you open up and allow! But how to get out of all human limitations? You’d better read the book.

Memoirs of a Master: Short stories from a spiritual Master
Read more
One person found this helpful
Helpful
Report abuse

Claudia
5.0 out of 5 stars In touch with a Master by enjoying his stories
Reviewed in the United States on December 27, 2016
Verified Purchase
For those who already Adamus Saint Germain i know that they cannot but read it anyhow :-). It is a must.
For those who are new to this beautiful, elegant and extraordinary Master and Friend of Mankind in this times of changes i have to say that it is a good way to enter into his realms of profound wisdom and lighthearted humor. Of course, the stories have many layers of wisdom, as all his teachings and shared messages do have. But in an elegantly simple way this masterful wisdom comes to us in the form of stories which is as entertaining to read as it is to be surprised by their endings. Pick a story by your intuition and see which title resonates the most with you and then jump on your couch with a good cup of tea or coffee - enjoy your time spent with beloved Adamus Saint Germain!
Read more
3 people found this helpful
Helpful
Report abuse

Ganna Alshoofi
5.0 out of 5 stars Full of life wisdoms.
Reviewed in the United States on June 5, 2021
Verified Purchase
I was guided to read this book by my wise energy healer when she connected to the other realm, it's wonderful book to read which gives a practical life wisdoms.
Read more
Helpful
Report abuse

Florin M
5.0 out of 5 stars Simple, yet very profound stories
Reviewed in the United States on December 3, 2016
Verified Purchase
I loved reading and feeling stories that contain experiences and the wisdom that comes from that, simple, presented with fun and compassion...
It is a rare opportunity to feel the simplicity of life, to get answers - if that's what you are looking for, or to just relax when you see a reminder about your journey (like `It all worked out` or `Allow` or `AND`).
Thank you Geoffrey, Linda and Adamus Saint-Germain for a rare diamond that anyone can have it just by looking into this book.
Read more
3 people found this helpful
Helpful
Report abuse

B. Kay Barrett
5.0 out of 5 stars Thoughtful and Provocative!
Reviewed in the United States on December 30, 2016
Verified Purchase
The stories resonated with me and summed up so much of the information and teachings of my three years listening to Adamus, Tobias and Kuthumi.
Read more
2 people found this helpful
Helpful
Report abuse

BOZ
5.0 out of 5 stars WELL WRITTEN AND HUMOROUS
Reviewed in the United States on July 14, 2019
Verified Purchase
Very Entertaining and well written. The stories are quite Inspiring...
Read more
Helpful
Report abuse
See all reviews

Karen
5.0 out of 5 stars Enlightening reading
Reviewed in the United Kingdom on May 29, 2017
Verified Purchase
Fantastic book - summarises his teachings via stories which makes them easy to relate to and remember. I had a few aha moments while reading.
Read more
One person found this helpful
Report abuse

placidia maria espinha
5.0 out of 5 stars Five Stars
Reviewed in the United Kingdom on January 11, 2017
Verified Purchase
Wonderfull deep personal insigths can come trough this priceless Memoires of a Master. What a blessing!
Read more
One person found this helpful
Report abuse

Marina Stoilov
5.0 out of 5 stars One of my all time favorite books!
Reviewed in Canada on February 11, 2019
Verified Purchase
This is one of the crimsoncircle.com books written for those old and wise souls who take full responsibility for their life and are ready to step into their Realization no matter the cost. Each one of the Crimson Circle books is irreplaceable and full of unique information that can assist the individual's journey into Allowing. Packed full of incredible information, this book will empower you and bliss you out, if you are ready to receive it.
Read more
Report abuse

Amazon Customer
5.0 out of 5 stars Fun stories to gain clarity and deep undesrtandings
Reviewed in Canada on March 23, 2020
Verified Purchase
This book is full of short and fun stories that helped me understand and integrate the core concepts about true freedom. It proves to me that simplicity and a bit of humor wins when it comes to explain an important topic as it is enlightenment or realization. I love it and reread it once in a while to remind myself of some key concepts.
Read more
Report abuse

Charmaine Wagner
5.0 out of 5 stars A Gift for You
Reviewed in Canada on December 16, 2016
Verified Purchase
Memoirs of a Master is an incredibly well written book that is filled with understanding, insight and great wisdom. Every story has the potential to touch that part of us that needs acknowledgement, acceptance and clarity. It is truly a Gift for anyone who wishes to go beyond and who is brave enough to welcome and allow the truth of who they are. Enjoy!
Read more
Report abuse
See all reviews