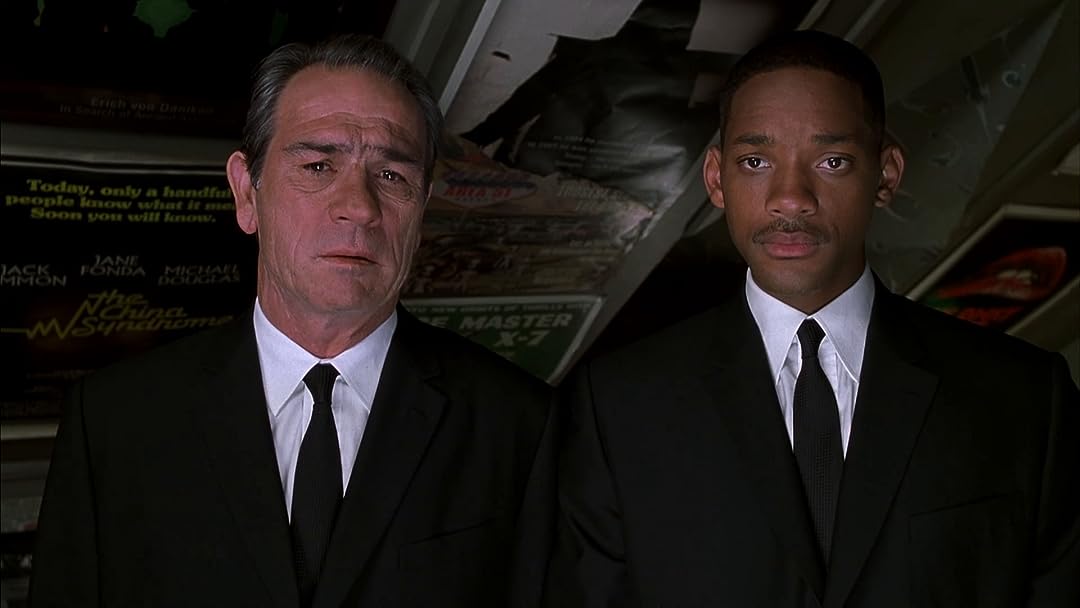 (7,314)
1 h 28 min2002X-RayUHD13+
An established officer of the interstellar police force must restore his partners memory in order to protect the world against extraterrestrial visitors.

Save with with the Men in Black movie collection on Prime Video shop now.

joel wingReviewed in the United States on August 27, 2020
4.0 out of 5 stars
Even more jokes than the first Men In Black
Verified purchase
Men In Black II had Agent J (Will Smith) re-uniting with Agent K (Tommy Lee Jones) to save the Earth from Serleena (Lara Flynn Boyle) who was looking for the Light of Zartha on Earth.

The movie had even more jokes than the first MIB. That started with J teaming up with Frank the alien talking dog. Then when J goes to find K he’s working at the post office and all the other workers are aliens as well including a cameo by Biz Markie. These scenes continued throughout the film.

Of course there were plenty of new aliens that got introduced. Agent J and Agent K got to shoot their laser guns and there was a big confrontation with Serleena at the end.

Overall, it was another great release mixing comedy, action, and sci-fi.
C

ForeverLisa99Reviewed in the United States on June 14, 2022
3.0 out of 5 stars
Not as good as the first one
Verified purchase
The whole story made the ending in the first one less relevant. I didn't like a lot of parts with the locker aliens and the post office aliens and how they had will Smith beat boxing cause he was a rapper long before he ever did movies. Still should have had a much better story but love the guy at the video rental place and how he gets a shovel to take care of living with his mom situation. That was best part.

nonoReviewed in the United States on September 16, 2020
1.0 out of 5 stars
Looking for DIGITAL COPY? Not on this one!
Verified purchase
Much like the Men in Black (+ UltraViolet Digital Copy)(Blu-ray) selling for a reduced price, this version, despite the description, DOES NOT include a digital copy. I returned it as well.
Hey Amazon, kindly fix the description of this product so the consumers does not make a mistake of buying them for the digital copy that it does not have.
3 people found this helpful

Obi WanReviewed in the United States on August 18, 2015
4.0 out of 5 stars
Worst of the 3, but still okay.
Verified purchase
░░░░░IT GROWS ON YOU░░░░░

You can't say Men in Black II was as good as the original. It's just not. When I first saw it in the theater years ago I didn't like it much at all. But over the years it's grown on me. It's funny. The characters don't change in the sequel, which is just about the worst thing you can do in a follow up. K is still K and J is still J.

I actually learned to appreciate how the entire movie is made to be reminiscent of a 1950's serial sci fi film. It's cheesy, but with modern special effects.

What the movie lacks is a good story. That's where it's weak. You just don't care if anyone finds the Light of Zarthon or not.

It's worth watching. It grows on you after a while to the point where it's worth 90 minutes of your time. But the first and third installments in the series were better.
5 people found this helpful

John Tilelli MDReviewed in the United States on December 9, 2002
4.0 out of 5 stars
Better than average sequel
Verified purchase
The problem with sequels is that they become topheavy with the expectations of those that saw the original, the producers relentlessly (and shamelessly) striving to seduce every possible viewer that is seeing it just to catch their favorite character or situation. God forbid that you leave out the little dog that talks, or the googly-eyed guy or the neuralizer. I mean, after all, someone might walk away disappointed saying, "Gee, I sure wish they included those weasly smoking guys!" I can only think of a few that I really liked better than the original - Like Godfather II, and even that does it's share of pandering the audience. Even so, it is suprising, and refreshing when a sequel works at all. Happily, MIB II does its job, and seduces without pandering. Well, maybe that is generous. I suppose I could get used to a little pandering, as long as it is really taseless. Everything is there, but each refreshingly different enough from the original to keep our attention. Sure the story is fairly predictable, but after all, this isn't Our Town. Here Frank is a grown-up agent and is hanging around with the dog guy. They need to find "The Light" or the world will end. K (Kevin) is the only guy who knows where it is, and he, of course had his ming erased at the end of MIB I. He needs to get his memory back, and, well, you get the idea. it's pretty much fun, albeit mindless. It is good for a yuk with the kids over popcorn on Saturday night, and Lara Flynn Boyle would keep my attention even if the movie was a dog (no pun intended). If she reads this, or if you know her, tell her that I hope that I see her in the sequel.
2 people found this helpful

GAMReviewed in the United States on August 6, 2022
1.0 out of 5 stars
If I hadn't seen it...
Verified purchase
...I would not have believed any MIB movie could be this bad. The plot takes forever to get moving, the jokes are weak, and the dialogue is plain stupid. Who greenlighted this screenplay? MIB II provides more proof that Hollywood producers have their heads up there.

Deborah MacgillivrayReviewed in the United States on January 6, 2003
4.0 out of 5 stars
Sparkle is off, but still fun
Verified purchase
Okay, some of the sparkle is off, because we know what to expect, but it is still very entertaining, with a lot of really funny jokes. Lara Flynn Boyle is an alien (ala Critters sees a magazine pictures and assumes that form) coming to earth in search of the Light of Zartha. She is not as menacing at Vincent D'Onfrio, so that lacks, which means the film rests solely on the the shoulders of superb Tommy Lee Jones and great talent of Will Smith. All the old character from the original are back, like the marvellous Rip Torn as Zed. This is not long originality, but if you loved the first one you will enjoy this one. If you did not, then don't bother. Simple as that.
It is fast pace, with lots of in-jokes from the first film, a funny running joke of Michael Jackson wanting to be a MIB, Frank the Dog Alien hanging out of the car singing I Will Survive, and Jones and Smith's fussing over who will get to drive the car,
The Duo DVD is loaded with goods, the extra features on par with the set of the original, including a cartoon shown with the movie in theatres.
5 people found this helpful

Gaia's AuntieReviewed in the United States on September 16, 2015
5.0 out of 5 stars
Nod Ya Head!!
Verified purchase
Join the Men in Black in a foolishly wild race against time to save the Earth...once again. Agent J must de-neuralize his former partner, the feared agent K, who's gone postal in more ways than one, in order to unlock the secret to saving the Earth from an evil, power-mad alien disguised as one of Victoria's Secrets. Sounds crazy? Well nod ya head...it is. Crazy fun with non-stop action and non-stop laughs. A few other-worldly friends from the original MIB movie have stumbled their way into this new madness for even more laughs.

My absolute favorite of all the MIB movies. A must have for those times you feel the need to strap yourself in and take a wild ride with the guardians of the galaxies.
2 people found this helpful
See all reviews
Back to top
Get to Know Us
Make Money with Us
Amazon Payment Products
Let Us Help You
EnglishChoose a language for shopping. United StatesChoose a country/region for shopping.
© 1996-2022, Amazon.com, Inc. or its affiliates