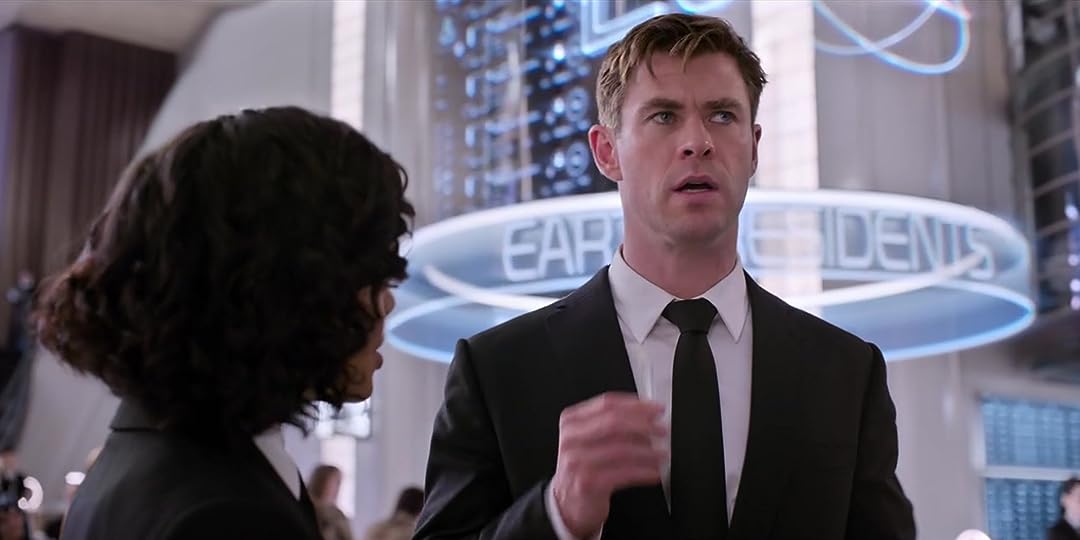 ShelldbowReviewed in the United States on June 19, 2019
5.0 out of 5 stars
Once again, another movie trashed needlessly
I once again almost skipped this movie because I heard it was terrible from both critics and reviewers. I decided to just go and see it and what do you know? I ended up enjoying it very much. I haven’t liked an MIB movie this much since the original one. I really thought that that the sequels to the original with Will Smith and tommy lee jones were weak and uninspired whereas this actually does breathe life back into the franchise and has a great plot, great acting, great action, and great chemistry between the characters. Chris Hemsworth and the woman agent who played Valkyrie in Thor:Ragnorok are great together and Emma Thompson and Liam neeson are exceptional in their respective roles. The alien sidekick is hilarious and awesome and adds to the movie instead of coming off as hokey. The story is really well thought out and was very entertaining; it had elements of humor and serious elements that balanced out very well. I enjoyed this much more than the sequels to the first one and I hope they make more of these with this cast because this reboot proved that Will Smith and tommy lee jones were not what made the franchise, it was the writing; I’m glad they stopped following formula and actually wrote a cool story this time around. Don’t listen to all the cynical critics and reviewers, go and see this with and open mind. Everyone else in the theater was saying how good it was when I went so I know I’m not the only one who disagrees with these critics. MIB international is the kick in the butt this franchise needed!!!
204 people found this helpful

Amazon CustomerReviewed in the United States on August 23, 2019
1.0 out of 5 stars
No Closed Captions
Verified purchase
I can't believe we paid top price for this movie and it has NO CLOSED CAPTIONS so my hard-of-hearing wife and I cannot enjoy it together. BOO!
88 people found this helpful

Connor AncarrowReviewed in the United States on August 23, 2019
1.0 out of 5 stars
How to ruin your night
Verified purchase
When I say this movie was available to buy I confess I may have jumped the gun. For starters the jokes are horrible they may have literally gave me cancer. Besides that the movie starts a bit interesting with some cool movies from Chris Hemsworth, but 30 minutes later I was looking up the effects of cleaning materials on the human brain to remove this god awful movie. When I finally survived an hour my dad turned it off and said he counldnt take it anymore. Even my mom who left after the first 10 minutes yelled at me for making them watch the movie.
71 people found this helpful

GracieReviewed in the United States on August 21, 2019
2.0 out of 5 stars
Fully understand the negative reviews
Verified purchase
No I wasn't expecting Will Smith and Tommy Lee Jones and the reincarnation of the first movie but I was hoping that it would at least be better than the last. Sadly it just is not. What made the first set of movies was that the two actors in those especially were comedic gold in their own rights. But in this one it shows how Hemsworth needs great writing and that Tessa Thompson is not a leading lady yet. The duo had decent moments and as another review stated the team only got somewhat good when Pawnie was added. Barely laughed in any way throughout the movie and the plat was just not suspenseful. When it ended I literally said to myself, "That was the end?"

Ya sure you know it's the final fight. but there wasn't one really was there? Not even up to the standards of 2 tbh certainly not close to 1 and light years behind 3. I was at least hoping for entertaining tonight to some degree and this just was not.

TheDrakenKnightReviewed in the United States on August 25, 2019
3.0 out of 5 stars
was gonna be 4 stars but gonna give it 3
Verified purchase
Understandably with a new female lead they were going to take shots at "men" in black, but the credits kinda well fcked it up for me, was an over all fun movie and at the end we find out why Chris was a loopy twit throughout, but damn it Hollywood why do you have to ruin a good time with political talking points, dont ruin my childhood I grew up with these movies and watch them to escape the real world not get thrust back into it when the credits roll.
49 people found this helpful

B. HaynesReviewed in the United States on August 21, 2019
5.0 out of 5 stars
I was surprised, I LOVED it
Verified purchase
Loved it, not sure why it got 3 stars. Cant wait to watch it again (you know to pick up on the stuff you missed the first time)
37 people found this helpful

Jess CrossReviewed in the United States on August 21, 2019
5.0 out of 5 stars
Different MIB. Enjoyable.
Verified purchase
It's a different type of MIB movie. I liked it. According to my husband the plot was obvious. But still, nothing to hate about it. Enjoyed it.
34 people found this helpful

Real World ReaderReviewed in the United States on August 24, 2019
2.0 out of 5 stars
Meh - pretty flat and bland
Verified purchase
I really wanted to like Tessa Thompson and the role of a spunky young black woman who takes on the system and makes a difference. But alas I don't know if it's acting or direction (likely both)) but she's so *bland*! She does this move, goes here, says this or that - but she's not creating a solid and vibrant character. She just doesn't create chemistry - personally or with other actors - on screen. Most of the other - better - actors seem like cameos not central, and the scenes all seem pretty generic and the sci-fi gimmicks cliche. Maybe she'll grow as an actor - but she wasn't ready for this movie.

I was disappointed in that blue lion-like alien. Based on previous history there should have been *something* there - but alas it was just another character.

It was "OK" - but really they could make an entirely new sequel and just forget this one ever played in theaters.

27 people found this helpful
See all reviews
Back to top
Get to Know Us
Make Money with Us
Amazon Payment Products
Let Us Help You
EnglishChoose a language for shopping. United StatesChoose a country/region for shopping.
© 1996-2021, Amazon.com, Inc. or its affiliates