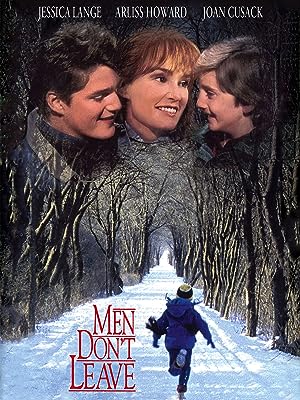 J. S. CubineReviewed in the United States on January 12, 2018
5.0 out of 5 stars
This sweet, funny
Verified purchase
This sweet, funny, and poignant film, directed by Peter Brickman, is the story of Beth McCauley (the incomparable Jessica Lange at her finest) and her two young sons, Matty (a remarkable Charlie Korsmo) and Chris (Chris O’Donnell, in his auspicious screen debut) having to redefine their family dynamic and learn to survive after the sudden death Beth’s beloved husband (Tom Mason). They leave their familiar hometown and move to the big city of Baltimore so that Beth can find work to support the family. Matty, along with his slightly shady pal Winston, plot to help Beth get the family home back. And Chris becomes overprotective of his mom and tries to thwart the budding romance that starts to bloom between her and Charles (the brilliant Arliss Howard), a quirky musician who starts to help Beth out of her depression. Chris also, much to Beth’s displeasure, moves in with Jody (the hilarious and touching Joan Cusack) a kooky nurse who lives in their apartment building. It also features Kathy Bates, in a scene-stealing turn as Lisa, Beth’s new boss who is a bitter divorcee. But the real meat of the story is watching Jessica Lange masterfully take us on a complicated journey of a woman who loses her love and is forced to fend for herself, keep her family together, and find a new purpose for her life. Lange was nominated for an Oscar that year for “The Music Box,” but most critics agree the nomination was for her sublime work in “Men Don’t Leave” as well
3 people found this helpful

Butterflymom54Reviewed in the United States on August 14, 2019
3.0 out of 5 stars
Sad! Family loss
Verified purchase
I found this movie to be really sad. Funny and sweet sometimes. It is a front row seat to a family of four that experiences a tragedy and the resulting days and weeks of them trying to get by. The Mother goes through a deep depression. The 17 makes decisions the mother disapproves of but he takes his life into his own hands and in a way, I respect that. The younger brother is probably the most affected. It is not a dark or depressing movie yet not uplifting either. Just a movie about a family. Fans of Jessica Lange may well like it. It is inspirational in a way. We keep moving on and try to hold onto the love we have as a family. Enjoy!
One person found this helpful

RebeccaReviewed in the United States on February 26, 2016
5.0 out of 5 stars
I love this movie
Verified purchase
This is a gem of a movie, filled with exquisite performances. I have seen it many times since it first came out, and I never tire of it. The story is sad, and not unusual, but the individual character's stories are interesting and detailed and real. The movie follows each family member as the family quietly unravels, each trying to cope with his grief and loss. And as they try to become whole again, the story manages to avoid so many of the cliches and quick fixes of modern cinema.
3 people found this helpful

Don R. HollowayReviewed in the United States on September 18, 2011
5.0 out of 5 stars
A Comical, Dramatic and Heartbreaking Movie
Verified purchase
This is a movie about a woman (Jessica Lange) and her two sons, ages 17 and 9, played by Chris O'Donnell and Charlie Korsmo, respectively. When Lange's character loses her husband in an accident, she is forced to move, with her two sons, to a cheaper place in inner-city Baltimore. All three members of the family are trying to grieve and cope in their own way with this tragedy, though not always successfully. (For instance, at the funeral, someone tells Korsmo's character that it's okay to cry. The boy replies coldly, "No, I'm not going to cry.") Ironically, at a time when they all need each other the most, they end up becoming more separated through their own poor decisions, bad judgment, and their sheer confusion over what is the best thing to do. At times, this movie was funny, such as in some of the wacky scenes with a neighbor, played by Joan Cusack. And don't miss the great turn by Kathy Bates as Lange's boss. At other times, the film was just downright heartbreaking, as in the scene with O'Donnell on the dock with Arliss Howard, and for me, the scene near the end with Lange and Charlie Korsmo (a truly brilliant actor), at their old home where Korsmo had run away to. In my view, this is a truly great film. Executive producer and director Paul Brickman has fashioned a real gem in "Men Don't Leave". This is a masterpiece that will stand the test of time, because the situation is timeless and human emotion is eternal. Finally, I think it is a travesty that such a brilliant film did not get a DVD release (although the Warner Archive Collection has made the film available in a DVD-R version). I highly recommend this film. Watch it and judge for yourself.
8 people found this helpful

nickReviewed in the United States on January 11, 2020
5.0 out of 5 stars
Chris O'Donnel is mesmerizing in this gem that holds up to repeated viewings and gets me every time.
Verified purchase
Watching MEN DON'T LEAVE (American adaptation of the French Film 'La Vie Continue'), 30 years after Warner Bros. original release, I am struck by how well the film has held up.

Chris O'Donnell's performance is heartbreaking and 'spot on'.

I. FinnReviewed in the United States on August 29, 2006
5.0 out of 5 stars
Sad, funny, poignant, beautiful film-
Verified purchase
This has to be Jessica Lange's greatest performance of all her great films. She portrays the shattered widow so believably, a woman that picks up and moves her and her two sons from small town life to Baltimore after her husbands sudden death. While her son's are trying to adapt and pick up the pieces with their new lives, she tries to fight off her depression with her frantic late night baking and constant daytime sleeping. Charlie Korsmo is heartbreaking as the sensitive younger son trying desperately to bring his Mom back to life. Arliss Howard plays the sweet musician that comes into her life quite by accident. Joan Cusack is great as the ditsy nurse that seduces the elder son, and Kathy Bates has a small part as the abrasive boss, for which she is at her usual best. I couldn't recommend this movie more, and make sure you have your hanky ready. I agree with the rest of the reviewers, when will this film be available on DVD???
15 people found this helpful

JReviewed in the United States on November 25, 2014
5.0 out of 5 stars
Good movie, great cast.
Verified purchase
Always liked this movie and when I started watching American Horror Story; Freak Show this season I was reminded of it. Jessica Lange and Kathy Bates in very different roles. Though Kathy Bates only has a small role it is still fun to see the dynamic in this vs. their dynamic in AHS;FS. I am also a huge Joan Cusack fan and she's great in this.
All around good movie, kind of sombre but has some very funny moments.
2 people found this helpful

George W. MooreReviewed in the United States on May 16, 2008
5.0 out of 5 stars
I've been through it myself. Very emotional for me .
Verified purchase
This film was extremely emotional for me because I lost my father when I was 4 years old. Although I don't remember him very well, I went through the same emotions that Matt went through in the film. It was as if the writer knew exactly what I went through.
My mother was also depressed and my goal in life was to make her happy so I hid my emotions. I tried everything in the world to make my mother happy, not thinking about myself.
I too wondered if my father knew what I was doing. And I too wanted to know when the pain would stop.
It has gotten better now that I have a 6 year old son, but when I see how attached he is to me, I feel sad thinking about what I went through.
God has blessed me with a beautiful family now so I am greatful for that.
This is one of my all time favorite films. The acting, the music, emotions.
It was very emotional for me to watch and I have it in my collection as one of my favorite films.
Sometimes we wonder if some films are real stories or if they can be true. I identified with this film completely.