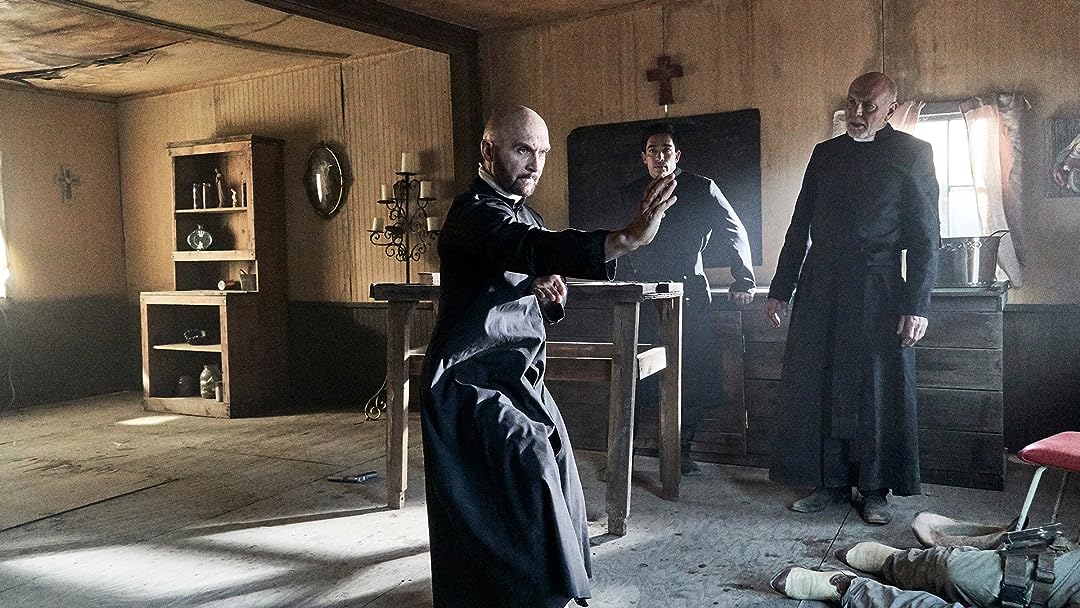 (406)
1 h 31 min2020X-Ray16+
A highly trained legionnaire turned mercenary is forced to take on his former comrades to protect a local village who nurse him back to health after a mission goes wrong in South America.

gijoeReviewed in the United States on February 2, 2020
2.0 out of 5 stars
So bad and corny for today's ability
Verified purchase
I couldn't get past the first half hour of this. What a waste of time. Blood splurting like an oil geyser, california scenery for iraq, bad acting, bad tactics, bad scene choreography, just too much to list for being bad. Did I mention its bad?
Wasted my money, hope amazon will refund...very bad bad bad.
15 people found this helpful

Rachael S.Reviewed in the United States on January 12, 2020
5.0 out of 5 stars
Great action drama, really great fight scenes
Verified purchase
If you like action and drama, you'll like this movie. The fighting - both hand-to-hand and gun fights - is very authentic and really well choreographed. Looks very real and also really creative. The lead is obviously a real martial artist and the special effects are awesome. A lot of fun to watch with a few people. Good acting, good story.
8 people found this helpful

frankReviewed in the United States on July 5, 2020
5.0 out of 5 stars
Lot's of action and still a decent plot and message.
Verified purchase
I thought this movie was great. I was only expecting a lot of fight scenes and explosions. But I got that AND a decent plot plus a good overall message. Good acting for the most part. If you like action and also appreciate a decent plot/message, you'll love this movie.
5 people found this helpful

JamesReviewed in the United States on August 19, 2020
5.0 out of 5 stars
Dominique is the real deal ..
Verified purchase
I thought it was going to be poor at first.. but when they showed this guy in a half trot through the desert (to conserver moisture and not over work his body) he was so natural I started to warm to his character .. he's obviously one bad dude .. I know there's always acting, but this guy is a natural, and he ain't jiving.. hard as nails, sharp as a straight razor, lethal .. makes Schwartzanoodle, Rambo, et al, look fake ... actually loved this movie.. the people who are looking for glitzy CGI, give it a one because it isn't Hollywood enough .. I'm no fan of Hollywood and I prefer a real killer to the pansy Hollywood pukes, with a few notable exceptions .. I'm more into the refinement of actual personal skill and discipline, this guy Dominique is a great fighter ...
3 people found this helpful

monstersdoexistReviewed in the United States on August 16, 2020
5.0 out of 5 stars
Vandenberg is a badass in real life.
Verified purchase
Dominique Vandenberg is a Belgian actor and stunt choreographer. Vandenberg lives in California, where he has appeared in such movies as Pit Fighter and Mortal Kombat. Vandenberg was born Dominique Horevoets in Waasmont, Belgium. As a young adult, Vandenberg competed in many martial arts competitions, winning most of them, and left school at age sixteen to enroll in a Kunto training course in Okinawa, Japan. After graduating the course in a tie for first rank, Vandenberg returned to Belgium, where he was drafted into the military. Vandenberg volunteered for a post in Germany as it offered a shorter service of eight months (as opposed to a year). Immediately upon his release, Vandenberg began training for an invitational freestyle martial arts competition he had been invited to upon completion of the Kunto course. Vandenberg won the competition with only two months of training but was hit by a car and broke his leg.
Unable to fight in further events, Vandenberg left Belgium to join the French Foreign Legion. Graduating from basic training in the top five, he was allowed to pick his post. Vandenberg chose the elite paratrooper regiment, the 2REP, and, after more training, was sent to Africa. He spent five years in countries such as Chad, Nigeria, and the Central African Republic, fighting to control rebellions. During this time, he met his fiancée, Waruny, a freedom fighter. After their meeting, he returned to fulfill his last eight months of service to the Legion, but when he returned, she had been killed.
Vandenberg then left the Legion for good and traveled to Thailand to fight in their famed freestyle fighting rings, or "iron circles". After winning several bouts, he returned to Europe

Some Useless GeekReviewed in the United States on August 5, 2020
2.0 out of 5 stars
Thoroughly mediocre
Verified purchase
This was Carmen Argenziano's next to last movie. Too bad -- such talent shouldn't be wasted on drivel like this. Oh, well. The writing here is nothing special. The story is pretty drab and plain; the story of a Bad Guy Wanting To Go Straight is very trite and tired. It isn't even particularly well portrayed here. None of the characters other than Father Elias (Argenziano) and boss Bad Guy LeClerc (Louis Mandylor) were very memorable. The technical stuff involving combat, firearms handling, close quarters fighting, and all that kinda stuff was pretty miserable.

Overall you'd need a really soft movie watching schedule to fit this turkey in. Even for free I'd say stay away. You can always find something better.
One person found this helpful

Kindle CustomerReviewed in the United States on August 3, 2020
4.0 out of 5 stars
Enough Action to Satisfy the Adrenaline Junky
Verified purchase
Betrayal and revenge pretty standard action plot with a twist of spiritual redemption thrown in makes for a different take on violence, death and destruction. Dominiquie Vandenberg did a great job with the martial arts and knife fights. Fight scenes had some realism in them IMO. The knife fights did not stick the other person once and they fell dead like a lot of movies. A femoral artery wound or an aorta in the neck will end a knife fight pretty quick. But sticking someone in the chest or stomach usually requires more than one hit. Killing in hand to hand is usually a bloody business and this movie delivered plenty of that. Vandenberg is obviously well trained. At the movie end, the credit to the French Foreign Legion gives a clue to his training. Carmen Argenziano played the priest really well IMO. His slight smile and persuasion fit his character well. The mercenary boss was good too. I almost passed this movie up because of the lurid poster cover but glad I watched the trailer and then the whole movie. It will satisfy my action craving for a while.
See all reviews
Back to top
Get to Know Us
Make Money with Us
Amazon Payment Products
Let Us Help You
EnglishChoose a language for shopping. United StatesChoose a country/region for shopping.
© 1996-2022, Amazon.com, Inc. or its affiliates