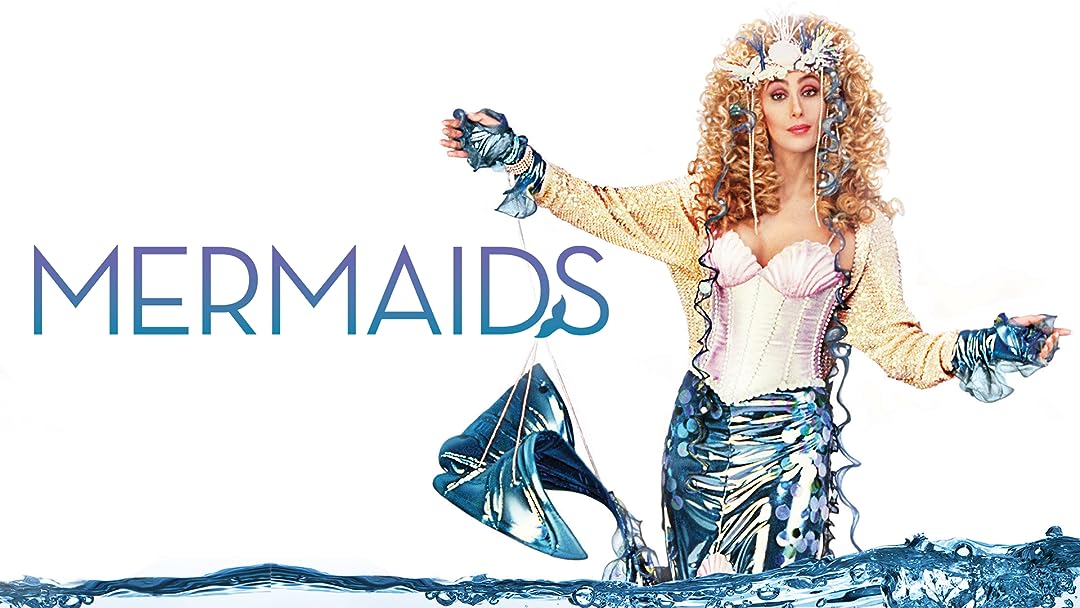 (1,575)
6.71 h 50 min1990X-RayPG-13
Set in the early 1960s, a sexy and unpredictable single mother of two is a source of constant embarrassment to her confused 15-year-old daughter, who's coping with her desire to become a nun against her own sexual awakening.

ToodlesReviewed in the United States on November 23, 2018
5.0 out of 5 stars
Unconventional families make for great entertainment
Verified purchase
Mermaids is a childhood favorite of mine. Having Cher, Winona Ryder, & Christina Ricci in a movie together is brilliant. Mermaids, Crybaby, Edward Scissorhands, Beetlejuice, The Nightmare Before Christmas, Hocus Pocus, Casper, Pretty Woman, Steel Magnolias, & Grease were played on rotation in my bedroom when I was a kid. That's all I would watch back then. Here it is almost a few decades later and I still love them. I'm glad I found the movie Mermaids here. It's just as good as I remember it. It takes you back to a different era, with a family that faces certain issues and challenges each other. Sometimes they just can't relate, and then there comes a day that they can.
12 people found this helpful

Yiannis PReviewed in the United States on November 14, 2016
5.0 out of 5 stars
Don't Miss It
Verified purchase
A very enjoyable movie with wonderful characters. The storyline supposedly follows the actual life of Cher's mother,
who changed locations every time she changed lovers. But all of Mermaids takes place in one location only, somewhere with "trees and weather" near Boston. Cher, at age 54, plays the role of Mrs. Flax, an eccentric mother at least twenty years younger--and does so very persuasively. Her two daughters are played by Winona Ryder as Charlotte, aged 15, and adorable 10-year old Christina Ricci as Kate, a champion swimmer. The late Bob Hoskins--the Danny DeVito of British cinema--is Cher's love interest and a very likeable fellow to whom Mrs. Flax has difficulty in committing. Charlotte, Winona's character, has her own peculiarities such as being enamored with Catholicism even though Mrs. Flax claims to be Jewish. She falls heads over heels in love with a 20-year old who is the caretaker of a nearby convent and also the school bus driver. With the exception of one major turning point toward the end of the movie, the rest of the film concerns itself with acquainting us with personalities of the Flax family, and the fluid dynamics of their interactions. There is much humor to this movie but also scenes of conflict and tragedy. Unquestionably, it deserves 5 stars.
20 people found this helpful

Amazonian VibeReviewed in the United States on August 21, 2021
4.0 out of 5 stars
Go Cher!
Verified purchase
I liked this movie, the family definitely lived a bohemian lifestyle and I admired the mother's flare. Despite their untraditional household, Ms. Flax did a good job raising her girls. I like the mom the most; I would definitely be a hot mom. :D
One person found this helpful

AdamReviewed in the United States on April 25, 2022
4.0 out of 5 stars
Makes our family laugh watching this movie together.
Verified purchase
Cher, Wynona Ryder & Christina Ricci gave excellent performances. A funny, sad and, definitely, a must see movie that brings you back to simpler times!
One person found this helpful

D. and M.Reviewed in the United States on September 13, 2018
5.0 out of 5 stars
Interesting film,
Verified purchase
I know it's not everyone's cup of tea, but me and my girls love this movie. It's one of our favorites and we watch it every so often. Keep in mind it's rated PG-13 for a reason, you don't want kids to watch this. Teens and older can definitely understand the story, themes and adult situations.

This is not a warm and fuzzy film, nor is it realistic, but it's an escape from your own reality for a couple hours. Just go with it :-)
5 people found this helpful

Hee Chul KwonReviewed in the United States on December 10, 2015
4.0 out of 5 stars
GREAT ALL TIME FEEL GOOD FILM
Verified purchase
This movie is a feel good movie.
Cher and Winona Ryder are both so charming. Also Bob Hoskins and Christina Ricci were very good for the roll.
Also Michael Schoeffling is a hidden gem.
The story was pretty much predictable but still very fun for all ages.
It's a good family movie but also for everyone who wants to feel good, this is a must see movie for everyone.
All the actors' chemistry is at it's top! Actually this movie is pretty rare because each actors are perfectly acting with each other, so perfect that I amost felt like they are real family and friends, lovers.
I still remember Cher and Winona dancing around with the music playing from the radio. It's so great!
5 people found this helpful

Stephanie De Pue MurphyReviewed in the United States on June 26, 2007
5.0 out of 5 stars
Another Moving Dance Scene
Verified purchase
"Mermaids,"(1990) starring the well-known singer-actress-entertainer Cher, is another good romantic comedy that came along on the heels of the 1980s. The clarion-voiced Cher, of course, has been singing since the mid-60's, with her then-husband, Sonny Bono and without him, and has had many chart-topping hits; they had a widely popular television show in the 1970s. The actress won an Oscar for "Moonstruck," also made "Silkwood," "The Witches of Eastwood," and "Mask."

"Mermaids" is, without doubt, a chick flick. It was orignally meant to be the Scandinavian director Lasse Hallstrom's American film debut; however, Cher didn't care for his work. Neither did she care for Frank Oz's. So it was directed by former actor Richard Benjamin. Unfortunately, many sophisticates can't say "Richard Benjamin," without, in the same breath, declaring "tv sitcom." And when it's a chick flick too, well, the scorn.

The movie also stars the English Bob Hoskins, playing Lou Landsky, lusty, unlikely love interest to Cher's Mrs. Rachel Flax. The child Christina Ricci made her debut as Kate, Mrs. Flax's younger daughter, born to swim. Winona Ryder holds the camera as the older daughter, Charlotte, in heavy flirtation with Catholism although the Flaxes are Jewish. Ryder was then a child star, more particularly a teenage star, until Angelina Jolie stole "Girl Interrupted," out from under her, and she had her regrettable adventure in shoplifting. Oddly enough, the English teenage star Emily Lloyd had been signed to play this part, but she was blond. Cher, who evidently had a lot of say on this picture, thought viewers were unlikely to accept a blond as her screen daughter. So Ryder was brought in, and Lloyd received a studio settlement.

The picture's set in a lovingly recreated 1963, and treats the major world event of that year, the assassination of President John F. Kennedy, with considerable discretion and grace. Mrs. Flax is a hot-blooded single mother who gets herself into talked-about trouble with men, then moves on to the next randomly-selected town. Her daughters just must get in the car. We open with the Flaxes' relocation to a pretty Massachusetts coastal town, where Mrs. Flax and, this time, her older daughter, will meet men. Kate will win swim meets.

The cinematography gives us plenty of pretty. The soundtrack's chock-a-block with early 60's hits. Included on the soundtrack, for sure, is Cher's adaptation of "The Shoop Shoop Song," initially made a hit by Little Eva; now far better known as "It's In His Kiss," by Cher. The script's witty: in an often-quoted line, Flax dismisses one of her daughter's teachers as a guy who drives an Edsel. Does "Mermaids" have the heart of a sitcom? Well, it has heart, for sure-- it's really about family. And I don't watch tv sitcoms, can't abide them, but I love this movie. The final, touching scenes, where the Flaxes dance around their kitchen, setting the table to Jimmy Soul's irresistible "If You Want to be Happy the Rest of Your Life, Never Make a Pretty Woman Your Wife," perfectly express the relaxed intimacy, and joy, of family life, and present us another moving, off-handed movie dance scene.
8 people found this helpful
See all reviews
Back to top
Get to Know Us
Make Money with Us
Amazon Payment Products
Let Us Help You
EnglishChoose a language for shopping. United StatesChoose a country/region for shopping.
© 1996-2022, Amazon.com, Inc. or its affiliates