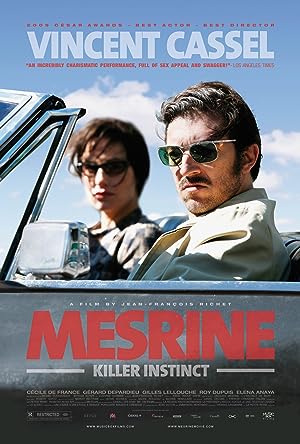 (117)7.51 h 53 min2010R
MESRINE: KILLER INSTINCT introduces us to Jacques Mesrine (Vincent Cassel), a loyal son and dedicated soldier back home and living with his parents after serving in the Algerian War. Soon he is seduced by the neon glamour of sixties Paris and the easy money it presents. Mentored by Guido (Gerald Depardieu) Mesrine turns his back on middle class law-abiding and soon moves swiftly up the criminal ladder. After pulling off an audacious heist he and his lover Jeanne (Cecile de France) flee to Canada where the opportunity of one big payout lures him out of hiding and propels his towards international notoriety.

GregReviewed in the United States on August 25, 2019
2.0 out of 5 stars
Lots of Potential But Poor Production
Verified purchase
Lacks continuity between scenes. Character development is non-existent. This movie begins with crimes and violence then jail-time and plotting. After one hour and twenty-seven minutes, a little suspense begins to build but the result is hardly climatic. The notes on imdb say the two movies were filmed over 9 months but it doesn't look like they put that much effort into it. It looks like it was shot over two weekends.

Forty minutes into the movie I was going to give it 4 stars then, after an hour, three stars and after another twenty minutes it bottomed out at two stars. The fake beards in this movie are horrible. Elena Anaya stole my heart. Gérard Depardieu is fantastic.

Mark MellonReviewed in the United States on November 9, 2017
5.0 out of 5 stars
Quel gars dur!
Verified purchase
For those of you who don't mind foreign films with subtitles, this is one hardboiled gangster movie. Vincent Cassel absolutely dominates the screen as the completely crazy, vicious French gangster Jacques Mesrine. The action is continuous and thoroughly believable, violent shootouts, robberies, and most notorious of all, prison escapes, to include getting out of France's toughest prison, La Sante. Gerard Depardieu nearly steals the show as his criminal mentor. Mesrine could put any American gangster to shame in terms of sheer gall and ruthlessness.

DJ Mikey MikeReviewed in the United States on May 26, 2016
5.0 out of 5 stars
Vincent Cassel kicks ass in Mesrine!
Verified purchase
This is a great gangster flick. Probably not one that too many people have heard of in the US but I highly recommend. Vincent Cassel just has a great on screen quality. I love watching him and this movie sits on my DVD shelf comfortably in the Gangster section right next to my Scorsese collection, Pulp Fiction, Reservoir Dogs, Donnie Brasco, God Father Collection, Gangster Squad, Sexy Beast, You Kill Me, etc. If you collect gangster flicks, part 1 and 2 of Mesrine are must adds!
2 people found this helpful

Nero WolfeReviewed in the United States on June 3, 2019
5.0 out of 5 stars
True story of an EXCITING THIRD FORCE IDENITRIAN French Revolutionary !
Verified purchase
Fascinating French and Quebecois French Nationalist to emerge after ALGERIA and the European Empire collapse. MESRINE learned what he could from the leftist revolutionaries.
[La journaliste interview: Regarding the politics, are you on the left or the right?
Jacques Mesrine: [sighs] Neither side. I think politics are a dirty game. It's better to keep the distance from it. I don't trust any politician.]

xenocReviewed in the United States on May 19, 2013
4.0 out of 5 stars
dark, moody, french
Verified purchase
This review is for both Part 1 and 2 as they go together and tell the story in order of Jacques Mesrine, the notorious French criminal who gained noteriety in the 1970s. Very well acted, particularly by Vincent Cassei who also does a fantastic job in "Le pacte des loups" and a number of other movies. Also a fascinating and compelling story told without a hint of senitmentality, particularly doing a good job portraying the complexity of an individual capable of both great bravery and charisma but also great cruelty and greed. Highly recommend if you like movies like Ronin, Heat, Carlitos Way and similar crime dramas.
One person found this helpful

cullions889Reviewed in the United States on November 2, 2012
5.0 out of 5 stars
How it all began
Verified purchase
This is Part 1 of two fascinating and exciting filmizations of Jacques Mesrine's autobiography. He was a real-life master criminal, a hotblooded Frenchman who beat both the penal and judicial systems. He became a career criminal at a young age; as he tells his father in one scene, it is his choice, it's not his father's fault that he turned out the way he did. Mesrine started his "career" with petty thievery, moving up to bank robberies, kidnapping, extortion, and murder. No prison could hold him, and he mocked the judges at his trials. This is a great movie, and you should see this Part 1 first, then the follow-up, Part 2, Public Enemy Number One.

Michael KingReviewed in the United States on December 11, 2018
3.0 out of 5 stars
Three stars plus
Verified purchase
The book "Death Instinct" is much better. Maybe someday Hollywood will make a much better adaptation

cullions889Reviewed in the United States on October 9, 2012
5.0 out of 5 stars
Fantastic, excellently-acted gangster saga
Verified purchase
Vincent Cassel burns up the screen as Jacques Mesrine, the lifelong criminal who became a folk hero to the masses in France. Mesrine went from young man and former Algerian soldier to petty thievery, then bank robberies, to murder and mayhem. His mentor Guido, played by Gerard Depardieu, reminded me of a "Pauly" like figure from the movie "Goodfellas." Great acting by all elevates this movie to greatness, an essential film of the gangster oeuvre.
One person found this helpful
See all reviews
Back to top
Get to Know Us
Make Money with Us
Amazon Payment Products
Let Us Help You
EnglishChoose a language for shopping. United StatesChoose a country/region for shopping.
© 1996-2021, Amazon.com, Inc. or its affiliates