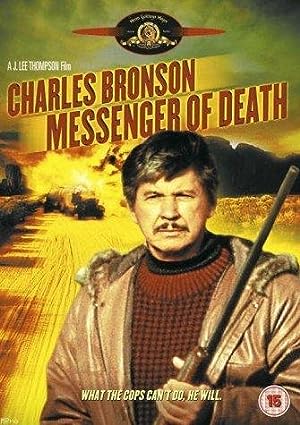 (148)
5.51 h 31 min1988R
Charles Bronson is Garr Smith, a Denver police detective on the trail of a serial killer linked to a century-old cult of Mormon avenger--known as "unholy angels." Smith learns from the locals that these avenger may indeed be among the living at Lizard's Head. The evidence is, however, that common greed over a fortune in oil is the more likely ingredient, but this doesn't change the grisly nature of the murders, or the possibility that Garr could be the next victim...an eerie tale of ritual murder.

Ken R.Reviewed in the United States on April 22, 2020
1.0 out of 5 stars
Maybe the worst Charles Bronson movie made.
Verified purchase
The movie is horrible - from start to finish. That said, Amazon describes the movie as, "Charles Bronson is Garr Smith, a Denver police detective on the trail of a serial killer linked to a century old cult of Mormon avenger--known as "unholy angels."

First off, Bronson players a newspaper reporter, not a detective.
Secondly, who wrote this description? Is Amazon hiring monkeys from the zoo to write their descriptions? The sentence is grammatically incorrect in at least three places. Complete drivel. Totally unprofessional. Amazon should be embarrassed.

Jeffrey P BairdReviewed in the United States on June 25, 2020
2.0 out of 5 stars
Just bad
Verified purchase
This is such a disappointing movie. The plot is weak. A reporter leads the police to the killer of an entire Mormon polygamous family, 3 wives and several children...REALLY!!! First off, the Fundamentalist Mormons in this movie are so far removed from reality, it can only come out of Hollywood. Second, the type of murder that starts this movie off, would have drawn so much attention, police would have been all over it, and a reporter would not have been the main investigator. Third, the action is a vehicle being forced into a crash by a total of 3 semi pulling tankers, on hilly roads and being trapped between 2 of the tankers for miles of driving, with no one else on the road until the end when the 3rd tanker shows up, is just so Hollywood stupid. And then finally, the ending is just stupid, nothing else can be said about it. I usually like Bronson movies and don't expect much out of the story line, script, acters, and even action. but this was just way too little to enjoy, except to laugh at parts.
2 people found this helpful

Barbara MReviewed in the United States on May 18, 2020
4.0 out of 5 stars
Good Movie!
Verified purchase
Yes, the description states that Gar Smith (Charles Bronson's character) is a detective when, in fact, he is an investigative reporter, but that doesn't detract from the movie. The acting is good, as is the story line. I would have given this movie 5 stars if it hadn't for the hokey 'accident' scene where the Colorado Water Company were trying to kill Charles Bronson and Trish Van Devere. I mean, come on! All they had to do was push them over the cliff! It didn't take 3 trucks to do that. Otherwise a good movie with a plot that has been going on since the beginning of time, and will continue as long as there are a lot of dollars to be made.
3 people found this helpful

Khristine JacksonReviewed in the United States on March 27, 2021
3.0 out of 5 stars
Charlie ... we miss you ..
Verified purchase
The late Charles Bronson was a good actor ... he didn't find his footing until the early 1970's . He was nearly 50 years old when he was given his time to shine .. before that he was was co starring in many films. This movie I have never even heard of .. in part he I knew him for the roles from "Death-Wish, The Mechanic " and other movie that he co-starred in with his wife at the time Jill Ireland.. The some of cast member's I recognize from other movies .. years earlier . This wasn't one of his best .. but at least this kept his fan based supporting his career. We won't ever see his likes again ...
One person found this helpful

clickity3Reviewed in the United States on November 29, 2021
1.0 out of 5 stars
Worst movie of all time?
Verified purchase
Yes! I've finally found what I believe to be the worst movie ever created! You know that a Charles Bronson movie is going to be bad, but this is a piece of work so horrible, that there is no way you will be able to finish it. A Denver reporter is allowed to take the lead on police investigations? It was nice to see the Brown Palace Hotel on film. I don't remember the red vinyl booths, but maybe. SPOILER: I made it to the first heart attack shown. I hope there were more. I struggled on whether to give this one or five stars, based upon my euphoria over the bad directing, acting, dialogue, cinematography, casting, plot, etc.

Bruce WinningReviewed in the United States on June 6, 2020
5.0 out of 5 stars
he's a reporter with moves
Verified purchase
It is a 1988 movie reformatted for a 1080p TV; 1.85:1 (tiny bars on top and bottom) and I appreciate that. I like the action and violence which is what I like the most of this movie. I like the shooting and punching and kicking. I like the vehicle pursuit scenes. I didn't read descriptions or reviews. I just liked the title and lead actor. I was right.
2 people found this helpful

Gayle MaddenReviewed in the United States on February 22, 2017
5.0 out of 5 stars
Got this movie for the scenery
Verified purchase
Little known Bronson movie, he doesn't kill anyone believe it or not. I bought this to see a few scenes around my home area, the Colorado Monument, the Palisade cemetery and other parts of Colorado further away from the Grand Valley. They didn't do a half-bad job of shooting some beautiful shots, however there were some edits that didn't make sense to the actual area. This movie would not be for kids (although these days you might see much more violence in a similar movie - I believe there was only one curse word), and it would not be for someone who is sensitive about Mormon stereotyping.
6 people found this helpful

Looking CloserReviewed in the United States on February 9, 2021
1.0 out of 5 stars
Message was lost
Verified purchase
One of Bronson's worst movies. But it's from the 1980s, so it's expected. Badly conceived and executed. TV movie or worse. Made for video rental market. Charles looks tired and overweight, nothing behind his lines. Don't waste your time. Choose another Bronson film.
See all reviews
Back to top
Get to Know Us
Make Money with Us
Amazon Payment Products
Let Us Help You
EnglishChoose a language for shopping. United StatesChoose a country/region for shopping.
© 1996-2022, Amazon.com, Inc. or its affiliates