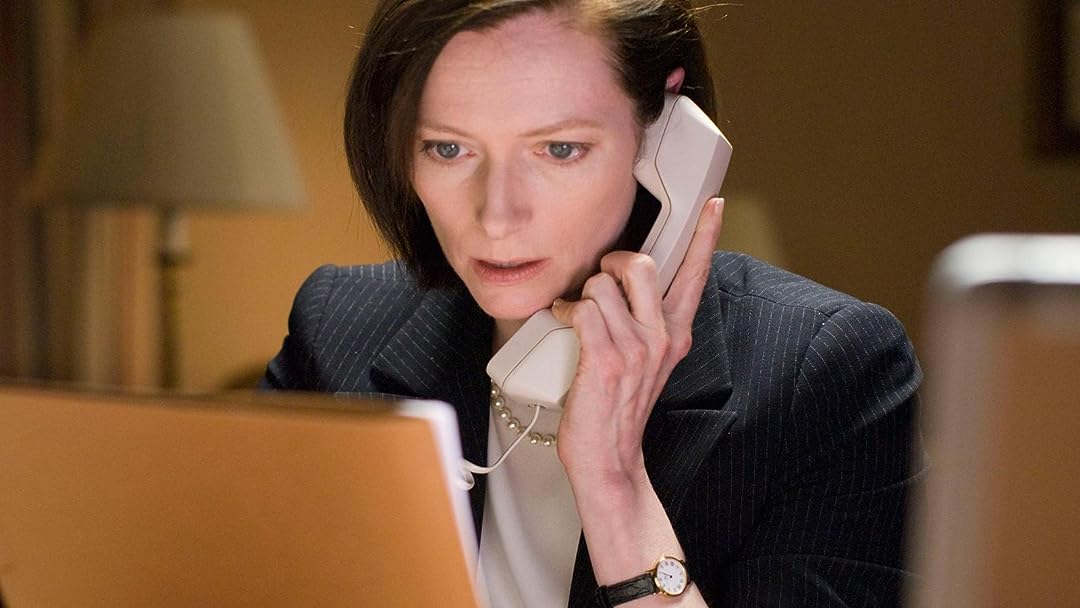 EmmieReviewed in the United States on November 26, 2018
5.0 out of 5 stars
Flawless
Verified purchase
I rarely give 5 stars to a movie. They're reserved for films so true and with humanly complex characters. For instance, my favorite movie is Training Day. When have you ever seen such an astonishing performance?
George Clooney is that incredible character in an excellent movie, with a tight, spare script and great direction.
In the last scene the shot on Clooney's face must have lasted 5 minutes. It's ridiculously hard to maintain your character in the 'stare' of the camera. You can see the disgust and tension fall away as the hint of a smile appears right before the cut.
Tilda Swinton was also excellent. Her subservience, imposter syndrome, rampant anxiety and those power suits! It's a accurate picture of the woman walking a high wire to keep her success, but it's right out of the 80's like her clothes. She's a sad sack until she decides to destroy anyone in her way.
The greasy, perspiration soaked, fluidly moral, weak automaton who 'presents' in terror, by rote, smiling "yes" woman perfectly reflects the corporate world. The cop is a beautiful foil to that. Right is right and wrong is wrong. What a relief.

What if Arthur is sane and the legal representation world is crazy?

For those of you who need bullets flying and car chases to be 'excited' about a movie, don't watch this film.

For those who want to devour a sumptuous banquet of menace, morality, and success and failure with a touch of insanity, this film is for you.

KR503Reviewed in the United States on November 13, 2017
5.0 out of 5 stars
A Top-Notch Thriller With Great Characters and Great Acting
Verified purchase
A top-drawer thriller with a really interesting structure. The great cast includes George Clooney in what might be his best role (certainly one of his best-written roles), Tom Wilkinson, whose performance is breathtaking, and Tilda Swinton, who is also awe-inspiring to watch for anyone who is interested in the craft of acting. This reminds me in tone a bit of Sidney Lumet's THE VERDICT, another great film, both about two men, once brilliant in their careers, slip-sliding away and being presented with one last chance to prove themselves. In MICHAEL CLAYTON, the film actually begins close to the end of the story, and then loops back around on itself, to tell the whole story, returning to the same point where it began, and then continuing on. The resulting unveiling of the plot gives you context for the beginning and when the opening moment comes around again, it's very satisfying to see what a coup the writer pulled off. There are a lot of suspense thrillers out there -- it's one of the genres America seems to produce the most. But this is a really, really, really strong playbook on how to do everything right when working in this genre.
13 people found this helpful

Bill WeaverReviewed in the United States on April 12, 2022
4.0 out of 5 stars
an entertaining piece of folklore
Verified purchase
I can’t think of another George Clooney movie I like all that much but I do like this one. Despite its incessant moralizing and hyper-romanticization of ‘resistance’ to modern life, I could watch it again and again. We are in the ‘dark woods’ of conspiracy theory, but this is nonetheless an entertaining piece of folklore. I suppose conspiracy theory is ok to George Clooney so long as it is a left-wing folk tale about the big bad corporations. Don’t get me wrong, corporations are as capable as anyone of acting badly. Perhaps from the perspective of organizational or systems theory, corporations are even more capable of such bad acts, as the institutional culture may serve to incubate corruption. Here we have a ‘bad apple’ (played with real heart by Tilda Swinton) in the form of a corporate attorney who conceals material evidence and then takes matters into her own hands to keep the cover-up going. The real problem here though according to the filmmakers (and many social theorists too it would seem) is not the ‘bad apple’ but the ubiquitous ‘system’ - as the quintessential agent of the system having a nervous breakdown (played with superb intensity by Tom Wilkinson) makes clear in this movie’s opening monologue that smacks to me of that famous movie Network, if we can only “make believe this is not just madness because this is not just madness.” Here we see not only ‘the violence inherent in the system’ but the central tautology inherent in every cinematic rebel! I confess despite my cynicism, the inner teenager in me loves this opening monologue, the description and accusation against ‘the system’ which is embodied in first “this wall of traffic” reminiscent of Fellini’s opening traffic jam nightmare from 8 and 1/2, and then the system as a biological organism or entity, the ultimate pet of corporate fascists and ‘company men’ across the land, “the overwhelming sensation [of being] covered with some sort of film . . . a glaze . . . a coating . . . some sort of amniotic, embryonic fluid . . . [from] an organism whose sole function is to excrete the poison, the amyl, the defoliant necessary for other larger more powerful organisms to destroy the miracle of humanity . . .” Despite my own personal cynicism about such high-minded social analysis I will admit that it strikes a chord undeniable to any thinking creature caught up in the web of society. We all intimately understand that it is our own ‘miracle’ that is choked by the corporate (modern, differentiated) system. The idea that we can express our ‘authentic’ humanity within this system is an insult to the very idea of such a miracle, yet a central directive of every HR department these days. Paradoxically it is the idea of the authentic ‘individual’ that served as the essential foundation of modern society. Without a ‘system’ to rebel against, there would be no ‘individual’. Without the ‘individual’, perhaps there would be no ‘system’. Despite my own misgivings about the work’s simplistic “I blame society” style of critique on evidence here (if only we could all just ‘wake up’ we could do what’s right, right?), I still like this movie. For individuals, confronted by the paradox of modern society on a daily basis, showing a ‘little man’ (a description used here in full knowledge of its fascistic subtext) who manages to strike a blow against the crushing gears of ‘society’, whether such a story is real or merely a fairy tale, the emotional payoff is immense.

MReviewed in the United States on July 4, 2022
4.0 out of 5 stars
Awesome movie but this version is missing a few scenes!!
Verified purchase
Phenomenal movie but this version is missing a couple scenes (I won’t say which ones! No spoilers here!).
This is clearly some kind of edited/shortened version of the movie - which was not disclosed in the description and really should have been (false advertising…?)

As a family who has seen it MANY times before, it did not go unnoticed.
One person found this helpful

joel wingReviewed in the United States on June 26, 2020
4.0 out of 5 stars
Great thriller that turns into a question about ethics in a lawsuit
Verified purchase
Michael Clayton (George Clooney) is a lawyer and a fixer. When someone has a problem they call him in to find a solution. He gets in over his head however when he’s called in to deal with his boss at the law firm Arthur Edens (Tom Wilkinson) who has a psychotic event during a deposition in a $3 billion lawsuit against a client called U-North. The story is not just a thriller but one about ethics.

The movie mixes a thriller and a moral dilemma. Clayton is first trying to track down Edens and then evolves into a question about what he will do with an important lawsuit Edens was working on. Clooney does a great job with Clayton. Being a fixer he really never had any ethics. He just got the job done. Now that he’s dealing with his friend Edens and the U-North case he finally gets struck by the truth of his whole career and whether the wants to continue with it.
C

LauraReviewed in the United States on December 8, 2018
1.0 out of 5 stars
Huh?
Verified purchase
I multitask when watching/hearing videos on computer. I thought I was following along, but I was surprised when the end came so soon. Is that all there is? Somebody has a slam-dunk suit against a chemical company. Chemical company hires hit men to off the lawyer who designed the winning case, and to off George Clooney who might be able to prove what the chemical company did. Deus ex machina saves George from being offed, so righteousness wins out in the end. Academy Award for that?

You can tell the movie is about something sinister because the lighting is dim.
6 people found this helpful

BuddyReviewed in the United States on August 5, 2016
5.0 out of 5 stars
One of the under rated films that never gets talked about enough...
Verified purchase
The first time I saw this film I have to tell you I would not have given it a 5 star rating. It was only after watching it several times over the years did I come to really appreciate the actors, screen play, and the Director for the wonderful work. This film is one that has to be watched on a number of levels and really thought about for its insight into human behavior. It is now in our collection and will stay there. If you have never watched it or watched it only once, please give it a chance. I think if you clear your mind and really get into the characters you will come to love this film as I do.
14 people found this helpful

Glenn T NewkirkReviewed in the United States on April 11, 2022
5.0 out of 5 stars
How to keep your life from coming apart.
Verified purchase
George Clooney plays a lawyer at a big firm. As a friend and colleague points out "You're really a fixer, Micheal, a bag man". And it's true. He is there to clean up messes and fix problems. In the meantime he is trying to keep his life from coming apart. The backdrop of all this is a huge class action law suit in which his firm is defending a large chemical company, whose product, in this case a fertilizer, is said to cause cancer.
In the end Micheal has become a liability to a certain executive in the firm and he is running for his life. Sidney Pollock did an outstanding job as one of the senior partners in the firm.
See all reviews
Back to top
Get to Know Us
Make Money with Us
Amazon Payment Products
Let Us Help You
EnglishChoose a language for shopping. United StatesChoose a country/region for shopping.
© 1996-2022, Amazon.com, Inc. or its affiliates