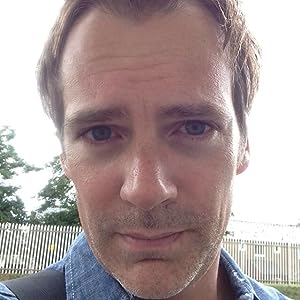 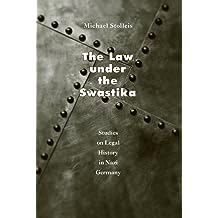 The Law under the Swastika: Studies on Legal History in Nazi Germany Dec 31, 1997
by Michael Stolleis , Thomas Dunlap
( 5 )
$37.49
In the Law under the Swastika, Michael Stolleis examines the evolution of legal history, theory, and practice in Nazi Germany, paying close attention to its impact on the Federal Republic and on the German legal profession. Until the late 1960s, historians of the Nazi judicial system were mostly judges and administrators from the Nazi era. According to Stolleis, they were reluctant to investigate this legal history and maintained the ideal that law could not be affected by politics. Michael Stolleis is part of a younger generation and is determined to honestly confront the past in hopes of preventing the same injustices from happening in the future.

Stolleis studies a wide range of legal fields—constitutional, judicial, agrarian, administrative, civil, and business—arguing that all types of law were affected by the political realities of National Socialism. Moreover, he shows that legal traditions were not relinquished immediately with the onset of a new regime. For the first time we can see clearly the continuities between the Nazi period and the postwar period. The law under National Socialism did not make a complete break with the law during the Weimar Republic, nor did the law of the Federal Republic nullify all of the laws under National Socialism. Through a rich and subtle investigation, Stolleis shows how the legal profession and the political regime both reacted to the conditions of the period and molded the judicial system accordingly.

Breaking the conspiracy of silence held by the justices in the postwar period, Stolleis stresses the importance of researching Nazi law in order to confront ethical problems in today's legal profession.
Read more
Other Formats: Hardcover 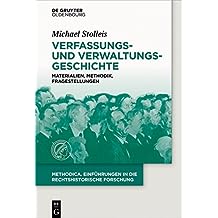 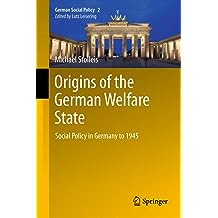 Origins of the German Welfare State: Social Policy in Germany to 1945 (German Social Policy Book 2) Nov 15, 2012
by Michael Stolleis
$23.74
This book traces the origins of the German welfare state. The author, formerly director at the Max-Planck-Institute for European Legal History, Frankfurt, provides a perceptive overview of the history of social security and social welfare in Germany from early modern times to the end of World War II, including Bismarck’s pioneering introduction of social insurance in the 1880s. The author unravels “layers” of social security that have piled up in the course of history and, so he argues, still linger in the present-day welfare state. The account begins with the first efforts by public authorities to regulate poverty and then proceeds to the “social question” that arose during the 19th-century Industrial Revolution. World War I had a major impact on the development of social security, both during the war and after, through the exigencies of the war economy, inflation and unemployment. The ruptures as well as the continuities of social policy under National Socialism and World War II are also investigated.
Read more
Other Formats: Hardcover , Paperback 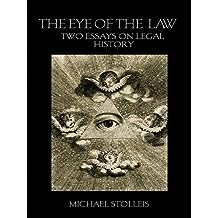 Written by the eminent German legal historian, Michael Stolleis, these two ‘Essays on Legal History’ offer an original and compelling history of the symbolism through which law is characterised as being 'above' us. In ‘The Eye of the Law’, the history of this metaphor is followed from antiquity through to the present day: from the Greek Eye of Justice, the eye of the impartial judge of the Underworld, the Eye of God watching past, present and future, the Eye of the Prince, guiding his subjects, to the almighty Eye of the Law. While our belief in the law may have become brittle, nothing escapes what is now the Eye of Big Brother. ‘In the Name of the Law’ takes up the various formulas used to legitimate the decisions of the courts, from the times of absolutism over the 19th century until today. The speaker who speaks in the name of a higher being underlines his function: his authority comes from above. And it is ‘in the name of’ god, king, people, state, nation, or law, that a weak, earthly, justice receives its support. 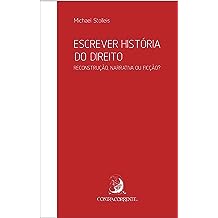 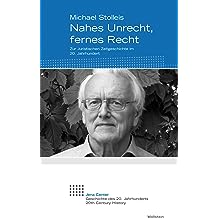 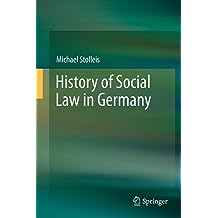 History of Social Law in Germany Oct 1, 2013
by Michael Stolleis
$23.74
The sole available comprehensive history of social law and the model of social welfare in Germany. The book explains the origins since the medieval times, but concentrates on the 19th and 20th centuries, especially on the introduction of the social insurance 1881-1889, of the expansion of the system in the Weimar Republic, under the Nazi-System and after World War II in the FRG and the GDR. The system of social welfare in Germany is one of the pillars of economic stability.
Read more
Other Formats: Hardcover , Paperback