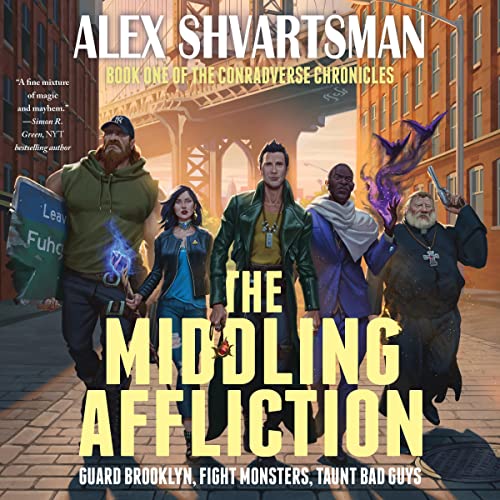 The Middling Affliction: The Conradverse Chronicles

What would you do if you lost everything that mattered to you, as well as all means to protect yourself and others, but still had to save the day? Conrad Brent is about to find out.

Conrad Brent protects the people of Brooklyn from monsters and magical threats. The snarky, wisecracking guardian also has a dangerous secret: He’s one in a million—literally.

Magical ability comes to about one in every 30,000 and can manifest at any age. Conrad is rarer than this, however. He’s a middling, one of the half-gifted and totally despised. Most of the gifted community feels that middlings should be instantly killed. The few who don’t flat out hate them still aren’t excited to be around middlings. Meaning Conrad can’t tell anyone, not even his best friends, what he really is.

Conrad hides in plain sight by being a part of the volunteer Watch, those magically gifted who protect their cities from dangerous, arcane threats. And, to pay the bills, Conrad moonlights as a private detective and monster hunter for the gifted community. Which helps him keep up his personal fiction—that he’s a magical version of Batman. Conrad does both jobs thanks to charms, artifacts, and his wits, along with copious amounts of coffee. But little does he know that events are about to change his life…forever.

When Conrad discovers the Traveling Fair auction house has another middling who’s just manifested her so-called powers on the auction block, he’s determined to save her, regardless of risk. But what he finds out while doing so is even worse—the winning bidder works for a company that’s just created the most dangerous chemical weapon to ever hit the magical community.

Before Conrad can convince anyone at the Watch of the danger, he’s exposed for what he really is. Now, stripped of rank, magical objects, friends and allies, Conrad has to try to save the world with only his wits. Thankfully though, no one’s taken away his coffee.

Your audiobook is waiting!
Learn more about membership
List Price: $12.59
You Save: $1.57 (12%)
By completing your purchase, you agree to Audible’s Conditions Of Use
Sold and delivered by Audible, an Amazon company

Arthur Borko
5.0 out of 5 stars John Constantine Meets The Librarians
Reviewed in the United States 🇺🇸 on September 8, 2022
Verified Purchase
I had a real fun time reading this book. I really enjoy settings that mix contemporary society with magic and Alex does an excellent job of creating a believable world that doesn't feel like a caricature of itself. It almost lends itself to feeling like someone's personal homebrew D&D campaign brought to life.

The main character is snarky but fun and at times he feels a bit like Constantine he never really reaches that same level of being an a-hole. Following his story from the very first page is effortless and fun. The book has a decent pace that doesn't slow down and even visits some other locals around the world which just makes the entire setting feel more real. Overall the adventure feels like a cross between an episode of Constantine (Arrowverse Edition) and The Librarians on a Thursday Night. If someone adapted this to a TV Show or Streaming series I'd be 100% with it.

The book had plenty of action scenes, tho they did get a bit muddled and I had to reread the page a few times that might be my own fault for reading ahead of my own brain and not the author. The side characters were fun and colorful and my only real complaint is that we don't nearly see enough of them given they all appear on the cover.

The cover of the book teases that it's the first in a series and I look forward to the next book, and hopefully some spinoffs too!

Final bonus, as a New Yorker it's really fun when the writer drops us into or mentions specific locations I recognize like an episode of Law and Order and all the pop culture references make it feel like It's me in the book with the hero.

If you like Fantasy Adventure set in Modern Day settings I strongly recommend you give this a read. If you're as a voracious a reader as I am you'll be done in a day and waiting for the next book.
Read more
Helpful
Report abuse

Sean McKeown
5.0 out of 5 stars Full of left turns at Albequerque
Reviewed in the United States 🇺🇸 on October 28, 2022
Verified Purchase
It's always fun to have a book that knows what you'd expect to have happen next if it followed the "urban fantasy" genre formula, then intentionally (and quite specifically) does something else entirely instead at every possible opportunity. The author can be forgiven for his minuscule technical self-insert into the magical universe he has created, because he doesn't actually appear on the page or get mentioned by name. If you didn't know him fairly well, you'd miss it entirely. ;)
Read more
Helpful
Report abuse

K. Walton
5.0 out of 5 stars A delightful romp that will stick with you
Reviewed in the United States 🇺🇸 on June 2, 2022
Verified Purchase
New York City is alive with Sumatran changelings, Philippine energy beetles, and all manner of bizarre and dangerous magical creatures. Conrad Brent is a member of The Watch, an organization of magicians who keep the city’s unsuspecting citizens safe. There's just one problem: Conrad isn't a magician. He's a “middling”: a person who can see the magical world around him but has no magical talent. Instead, he uses a combination of charisma, sleight-of-hand, and secreted magical artifacts to keep from blowing his cover.

This premise alone, reminiscent of Jim Butcher’s Dresden Files, would be enough to power an enjoyable novel, but Shvartsman takes it ten steps further. Despite being the first in a series, the book is packed with revelation after revelation, uncovering secret conspiracies, gods, dragons, and dangerous magical technologies. Forced to leave New York, Conrad portals across the world, where he finds out what it really means to be a middling and faces greater dangers and difficult choices. When he finally returns, he finds out which of his former friends are still willing to stand with him against a threat that could unravel their whole way of life.

The Middling Affliction brilliantly walks the line between humor and serious themes. Conrad faces true dangers, to himself and those he loves. He encounters prejudice and betrayals and hard moral choices. He comes to the edge of himself and must choose between what he’s always wanted and sacrificing himself for another’s good. Despite this, the book remains lighthearted throughout and sometimes laugh-out-loud funny. Conrad’s inner voice is sarcastic and engaging even while facing the prospect of violent death, and the quick banter and over-the-top magical monsters keep the tone light.

Few books strike that balance so well, delivering laughter and smiles inside a story that feels like it matters. For this, and for its engaging characters and inventive plotline, The Middling Affliction belongs on the shelf with John Scalzi’s Old Man’s War and Naomi Novik’s A Deadly Education. Readers looking for an entertaining read that will stick with them afterward will not be disappointed.
Read more
Helpful
Report abuse

Larry Hodges
5.0 out of 5 stars Look out, Dresden Files!
Reviewed in the United States 🇺🇸 on June 15, 2022
Verified Purchase
Just as fans of Lord of the Rings now have Game of Thrones, fans of The Dresden Files now have The Middling Affliction! This was a fun read of non-stop action and humor as wise-cracking protagonist Conrad Brent pretends to magic he doesn't have as the protector of Brooklyn from the numerous magical beings that plague the city. (He secretly uses magical devices to trick both friends and foes. He describes himself as a "magical Batman" but without Batman's bank account.) There's lots of pop culture references (even an egotistical real estate mogul/reality TV show star), wordplay ("These aren't the druids you are looking for"), and colorful characters (gun- and sharpened cross-wielding priest, a giant with a magical shotgun, and an innocent, persecuted woman who suddenly gains great powers . . . and basically falls to the dark side - can Conrad save her?). Everything revolves around Conrad, the compulsive defender of those who need defending against the magically powerful. He's loved by some, but not all. Says one character of Conrad, "You're abrasive and annoying. You turn everything into a joke and your jokes usually suck." And this was just one part of a long, insulting rant about poor Conrad! While the action centers around Brooklyn, there are also James Bond-like trips around the world as he meets up (and battles) enemies foreign and domestic – often with his own supposed allies who just don't know what Conrad knows. Can't wait to see book two!
Read more
Helpful
Report abuse
See all reviews

Mark Whybird
5.0 out of 5 stars One of the best grown-up modern-day urban fantasies I have ever read
Reviewed in Australia 🇦🇺 on October 3, 2022
Verified Purchase
I was genuinely surprised by this book time after time after time. I really connected with the characters, and one of those characters is the burrow of Brooklyn in New York, even though I live on the other side of the world.

I always love some good snark, but the fact that the main protagonist’s snark is a defensive mechanism for his imperfections is, itself, perfect and really resonated with me.

Give this book a go; I hope you enjoy it as much as I did!
Read more
Report abuse
See all reviews