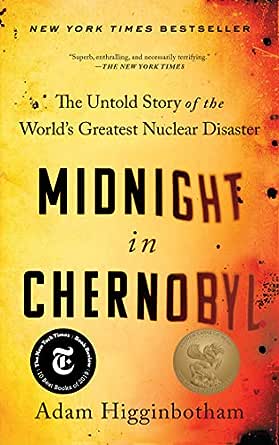 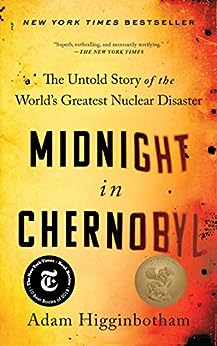 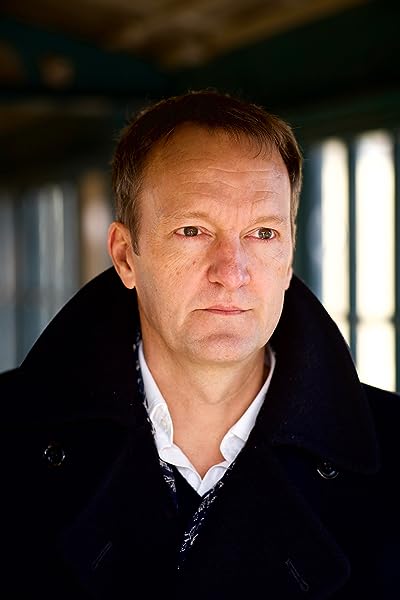 Adam Higginbotham writes for The New Yorker, The New York Times Magazine, Wired, GQ, and Smithsonian. The author of Midnight in Chernobyl, he lives in New York City.
See all Editorial Reviews

Alan L. Chase
5.0 out of 5 stars The official guide proceeded to give this UN group a speech about the wonderful safety history of Soviet nuclear power
December 19, 2018
Format: HardcoverVine Customer Review of Free Product( What's this? )
Author Adam Higginbotham has done a masterful job of blowing the lid off of the sarcophagus of obfuscation under which the Soviet Union attempted to bury the truths about what happened at Chernobyl in April of 1986. He dug deep into archives, personal papers, professional journals, and hundreds of hours of interviews to piece together the puzzle of the events that led up to the explosion that destroyed Reactor Number Four at Chernobyl.

The author offers, as well, background into the flaws in the design of the RBMK graphite-moderated boiler water reactor. He examines the corrupt and labyrinthine system of managing nuclear power in the USSR. While this is a superb work of journalism, it also holds the intrigue of a murder mystery. Who really was responsible? What really happened? Was it design error or operator error? The author makes this a very enlightening journey inside the minds of Soviet and Ukrainian leaders and scientists, as well as inside the broken lives of the workers who operated the plant and lived in nearby Pripyat.

Mr. Higginbotham makes a credible case for the fact that the Chernobyl disaster and its lingering aftershocks were the catalysts that led to the dissolution of the Soviet Union. Glasnost and Perestroika were not able to overcome the inertia of a Soviet machine that did not know how to tell the truth to its people or to the world at large. That lack of candor became as toxic for the Soviet state as the radioactive debris from Chernobyl became for those in the path of the fallout.

I had a very personal;interest in this story. In 1992, I was part of a UN group that toured the Chernobyl complex, the village of Pripyat, and several hospitals in Kiev that were treating hundreds of victims of chronic radiation poisoning. Many of them were suffering from leukemia, thyroid cancer, and a host of other diseases. When we arrived at Chernobyl, we were taken to a visitors' center where we were show a 1:6 scale model of the Chernobyl complex. The official guide proceeded to give this UN group a speech about the wonderful safety history of Soviet nuclear power. "Of course, there was this one small incident that the world tries to blow out of proportion," At that time, one of the remaining reactors was still functioning, ,and we were taken to the control room, mere yards from the notorious sarcophagus that had been built to bury the debris of the core of Reactor Number Four. The engineers operating the plant were smoking, and ashes from their cigarettes fell onto the dials of the instruments that told them the status of the reactor and the turbines. It was clear that not many safety lessons had been learned from the worst nuclear accident in history.

This is a story with many villains and some remarkable heroes. Add to the list of heroes Mr. Higginbotham, whose yeoman work in uncovering facts and truths about Chernobyl will help the world to make more informed choices about the future of nuclear energy. This is a book that should be read by anyone with an interest in energy, the history of the Soviet Union, and the forces that shape history.

Vladimir Kushnir
5.0 out of 5 stars Exceptionally good and deeply disturbing book
March 9, 2019
Format: HardcoverVerified Purchase
The author did an exceptionally good job on several levels. 1) he told personal stories of the people involved, 2) he explained very well to me (I am a professional physicist who worked with radiation all my career , though not a nuclear physicist) what actually happened with reactor during the accident. This was an eye-opening experience. 3) and finally, he described the inhumane nature of the soviet regime, it's secrecy and how it treated (or, mistreated) people and sacrificed their safety and health for the goals of covering up the accident to protect the reputation of soviet regime and soviet science and technology. This is one of the best non-fiction books I've read and most likely the best on the subject of Chernobyl accident. I give it 5 stars because I cannot give 6.
Read more
100 people found this helpful
Helpful
Comment Report abuse

Andrew R Marshall
5.0 out of 5 stars Life, death, and an epic tale of nuclear disaster
February 17, 2019
Format: HardcoverVerified Purchase
This is a gripping and enthralling read: a wild ride through a nuclear disaster and the desperate attempts of the men and women who tried to prevent it becoming something far worse. Higginbotham has a great turn of phrase, a grip on the material - but most of all, a sense that this a real story about real people. If you go into this seeing it as a story of nuclear physics and the failure of the Soviet Union, you’ll come out realizing that’s only part of the story. The men who fought the fires after the first explosion, the woman mayor who tried to save her town, the families who watched loved ones suffer from radiation sickness - this is about life and death. The story also tells us something about how politicians and officials struggled to manage - even deny - the truth, but the scale of the disaster escaped them. It’s a great read.
Read more

Schuyler T Wallace
5.0 out of 5 stars AN UNCOMFORTABLE REMINDER THAT'S BRILLIANTLY WRITTEN
February 19, 2019
Format: HardcoverVerified Purchase
Journalist Adam Higginbotham has written what has been described as “a blinding work of narrative fact” that will “amaze, enthrall, and cause every reader to shed tears” for the legacy left behind by a nuclear disaster in “Midnight in Chernobyl.” That’s a flowery review but totally appropriate.

The author brilliantly details the 1986 Chernobyl nuclear accident that started out to be a safety check intended to simulate a blackout power-failure. Through a combination of reactor design flaws and operators not complying with a test checklist, uncontrolled nuclear reactions caused several steam explosions and an open-air graphite fire. Airborne plumes of radioactive fission products were distributed into parts of the USSR and other European countries for many days.

Two deaths occurred at the facility during the accident, 28 firefighters and other employees died of acute radiation sickness shortly afterward, and fourteen cancer deaths of 134 hospitalized survivors followed in the next ten years. It is estimated that, over the long term, several thousand additional cancer deaths will be attributed to the incident’s byproducts. Billions of dollars will be expended to mitigate the damage that has occurred, both to humans and the environment.

Secrecy and falsehoods by the USSR are evident throughout the account. It is also apparent that accidents at nuclear plants occur frequently, most of which are relatively innocuous considering the potential. Because nations will never want to admit being the cause of any worldwide disaster, secrecy will probably continue to accompany nuclear mishaps by any government, a scary thought.

Higginbottham’s research is immaculate, his comments and conclusions are well founded, and his writing is impeccable. The author has skillfully avoided fustian sentimentality, the scourge of investigative reporting, but still presents crackling prose that was a magnetic attraction for this reader.

The official Politburo verdict blames the disaster on gross breaches of regulations by operators whose “irresponsibility, negligence, and indiscipline led to grave consequences.” The report lists the ministers who were dismissed and/or expelled from the Communist Party and states that court proceedings will follow. However, the author goes on to reveal that there’s much more to the incident.

Higginbotham has uncovered the reality of the nightmare of nuclear disaster and makes it obvious that more tragedies might be expected. The potential is so real that every proposal for dangerous enterprises, regardless of purpose or stated invulnerability, must be carefully vetted and reviewed by knowledgeable and unbiased sources. A thoughtful study of “Midnight in Chernobyl” is certainly a prudent exercise in gaining such awareness.