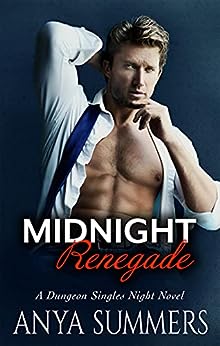 by Anya Summers (Author) Format: Kindle Edition
Book 4 of 5: Dungeon Singles Night
See all formats and editions
Sorry, there was a problem loading this page. Try again.
They were enemies…with benefits.

Sworn adversaries with no love lost between them. And yet, the night Brody throws down the gauntlet, challenges Reegan to surrender to his touch, she recklessly accepts.

She agrees to his terms. She makes a deal with the devil. She’s playing with fire.

And they are both about to be burned...

Audible Holiday Deal
Join Audible Premium Plus for 60% off. Only $5.95 a month for the first 3 months. Get this deal
Books In This Series (5 Books)
Complete Series
Dungeon Singles Night
Kindle Edition
Page 1 of 1Start OverPage 1 of 1
Previous page
Next page

4.6 out of 5 stars
4.6 out of 5
109 global ratings
How are ratings calculated?
To calculate the overall star rating and percentage breakdown by star, we don’t use a simple average. Instead, our system considers things like how recent a review is and if the reviewer bought the item on Amazon. It also analyzes reviews to verify trustworthiness.
Top reviews

Kindle Customer
5.0 out of 5 stars So Hot!
Reviewed in the United States on November 8, 2021
Verified Purchase
The story of. Reegan and Brody was so beautifully written. It showed how fear of love and commitment when your young can hurt like a deep wound to your heart. But 13 years later forgiveness can be found. What a beautiful story! Loved it! Can't wait for next book.
Read more
Helpful
Report abuse

JMAP
5.0 out of 5 stars Outstanding romance!
Reviewed in the United States on September 28, 2021
Verified Purchase
Loved it! The series continues to be excellent. And with the single Doms growing, I look forward to many more romantic stories. Definitely recommended.
Read more
Helpful
Report abuse

Redrabbitt
5.0 out of 5 stars YOU’RE THE ONCE IN A LIFETIME TYPE OF WOMAN
Reviewed in the United States on September 24, 2021
A great addition to this series is a spinoff from The Manor series, where we meet Gabriel Ryan at his BDSM club, The Eros Pit in Denver, Colorado. The story will begin with two people arriving late for Medieval Singles Night—too late to be included, and there are no stations left either. These two aren’t strangers—they had a platonic night thirteen years ago during college, but she has decided he is her sworn enemy. What would possess Brody and Reegan to lay their cards on the table and have one night together—at his private dungeon? They both have an itch to scratch—but will one night be enough?

“He was her enemy—and yet, she had never wanted a man more than she did, Brody.”

The story is full of angst, memories of the past, and passion. When Reegan and Brody arrive too late to be included in the festivities of Medieval Singles night—Reegan decides to have a drink or two and then care for a ride home. When Brody arrives late and sits at the bar, there is enough animosity flowing off of Reegan, but with a bit of encouragement, he talks her into joining him—at his private dungeon and having a scene together. Not only do they match each other perfectly in kink and passion, but they also discuss having more in the future. Both are extremely busy with their jobs, don’t date, and enjoy the dominance and submission aspects of Eros. So, will having an arrangement—a booty call—work for them?

Brody: I propose we make a deal, promise to help each other out in that vein when the other needs it. Our situation would be purely physical by our design, with rules we can devise. Pleasure without the mess of feelings getting in the way.
Reegan: You want us to be each other’s booty call?
Brody: Why not? We may not like each other but we are more than compatible in bed—or out of it, as the case may be. As for striking a deal between us, it would fill in the gaps without the pressure of a formal commitment. I need to dominate. You need to submit. It’s a win-win in my book. This is an arrangement for mutual pleasure only, and not an emotional commitment. I want to make that perfectly clear. At any time, if either one of us decides that this thing isn’t working, we call it quits. No harm. No foul.

“She couldn’t believe she was truly considering taking him up on his offer. To make him her Dom booty call. They would be, what, enemies with benefits?

The chemistry between Brody and Reegan is off the charts despite their past, but can they keep feelings out of it? Can they keep it just to kink and nothing else? With his private in-home dungeon, they don’t even need to go to the club.

“Unmitigated heart unfurled through every corner of her being. Her desire for him, and his brand of bed sport, was astronomical. All this time they had spent hating one another when what they should have been doing was each other.”

“Yes, they were enemies, but underneath it all, there had always been the possibility that they could be so much more.”

“In short order, he had become her sun and moon and stars, her dominant north star to guide her way. And it worried her. Because if she weren’t careful when this all ended, she would be left picking up the shattered remains of her soul. Suddenly, it no longer felt like a simple deal between them. It was more like she was putting her life, her heart, and her soul into his keeping.”

“A piece he had never realized he had been missing clicked into place—because it was Reegan. She was his missing piece.”

I enjoyed the story of Reegan and Brody—a second chance romance, but it isn’t a straightforward tale—these two have a past, one with plenty of ugliness and hurt. Deep down, each has carried feelings for one another, but how can they get past what happened thirteen years ago and move forward. Will their booty-call arrangement be the key to discovery? That there is more than just a sexual satisfaction to be found? That deep down, they each have stronger feelings—could it even be love? When a crisis sends Reegan to the hospital, and she can’t reach Brody, will she feel abandoned again?

Reegan: While I sat in that hospital room trying to reach you, and failing, I kept thing I was once again being ghosted by you—and when it mattered most. No relationship can survive when it’s built on quicksand.
Brody: You must know that I would never do that to you intentionally.
Reegan: The thing is, I don’t, and that’s the problem. Brody, whatever this was between us, it’s over.
Brody: You can’t be serious. Tonight was an unfortunate mistake but it wasn’t deliberate or premeditated.
Reegan: There’s nothing to work out. It’s done. That was part of our agreement, that when one of us decided we were finished, it would be over. And for me, it is.

Will this test their bond and bring an end to them? Will love win in the end or has history repeated itself? I loved the characters, the angst, the chemistry, secrets from the past, and passion in the present. The story has dominance and submission, with some discipline, edging, and explicit sex scenes, outside of Eternal Eros.
Read more
2 people found this helpful
Helpful
Report abuse

Debbie A. Orazi
5.0 out of 5 stars Midnight Renegade
Reviewed in the United States on September 24, 2021
Another really good book in this series. I love a good enemies to lovers HEA romance.

Reegan Taylor is the lead hacker of a think tank and a submissive. Thirteen years ago as a college freshman her heart was broken by Brody. They have had an adversarial relationship ever since meeting again at the club.

Brody Schmidt is an architect and owns a construction company. He is a Dom and a regular at The Eros Pit club. His mother recently passed from cancer and he promised her he would look for his one. He knew Reegan was his one back in college but was not ready or able to handle a relationship with her at the time do he ghosted her.

After missing out on scening at one of the club's singles nights, Brody proposes they hook up for a physical relationship even though he wants more. Reegan agrees but she does not trust him not to ghost her again. Brody eventually asks for more in their relationship and she agrees to date him. She gets hurt and cannot get in contact with him so she uses it as an excuse to break off with him. Brody is determined to get her back and they get their HEA.

I received a free copy of this book and am voluntarily leaving a review.
Read more
Helpful
Report abuse
See all reviews