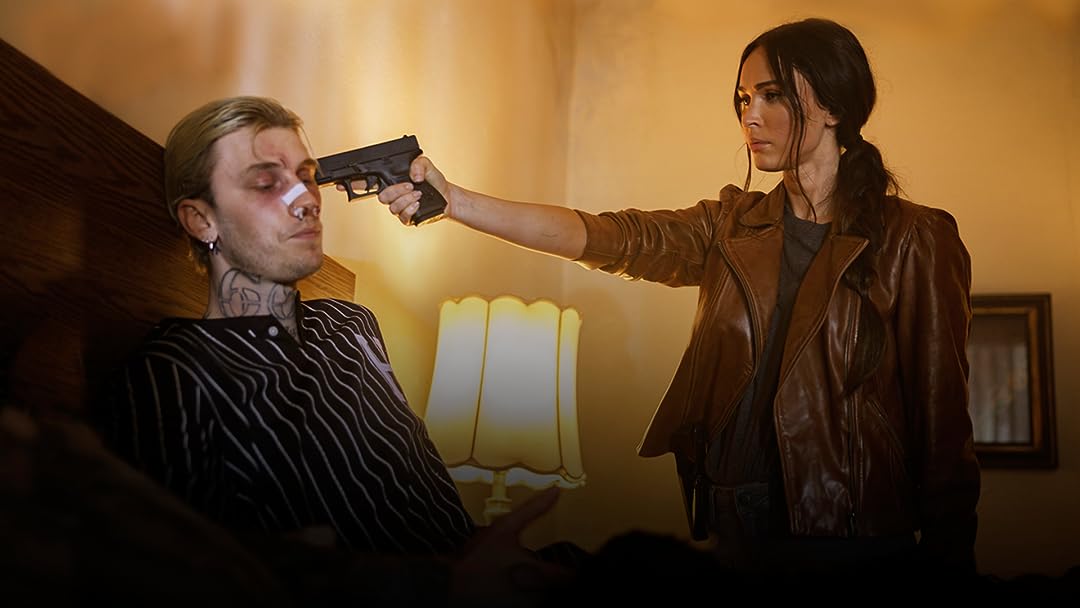 Midnight in the Switchgrass (4K UHD)

ErinReviewed in the United States on July 27, 2021
1.0 out of 5 stars
You’re not gonna get that time back…
Verified purchase
The acting is awful- don’t get me wrong, but the writing was so ridiculously horrible that you really can’t hold it against the actors. This movie might be enjoyable if you have zero clue how any area of law enforcement or just basic human emotion works. If this was written by a 6th grader- it makes sense. I’m a huge MGK fan! Literally that’s the ONLY thing that makes me not feel like a complete loser for buying this movie- I’m contributing to his daughter’s future, right?!
20 people found this helpful

Alexa PanagosReviewed in the United States on July 23, 2021
2.0 out of 5 stars
Slow and predictable
Verified purchase
I only wanted to watch this movie because it takes place in the town where I live. Unfortunately, the only thing that was actually filmed in our town was the drone shots for the opening credits. The acting was sub par at best. The story line felt like a loooonnnnggg drawn out episode of criminal minds but with a huge lack of talent. Megan Fox cast as and FBI agent is like Tom Green cast as Abraham Lincoln, it just didn't fit.
The only somewhat redeemable performance was by Emile Hirsch. who played an obsessed FDLE agent with a wife who never seems to stop crying through the entire film. Definitely not something I would be willing to watch again. I only with I could get my six bucks back.
11 people found this helpful

zeezeeReviewed in the United States on July 28, 2021
1.0 out of 5 stars
it blows
Verified purchase
bruh it reminds me of my ex who is the most boring person alive. id rather watch fornell from ncis prance around with his man boobs out on a 3 hour loop. that said the only good part was when megan and mgk were in the same parts. MGK AND MEGAN NEED THEIR OWN MOVIE LIKE COME ON PPL PLEASE SAVE UR MONEY DONT BUY THIS LIKE I DID
8 people found this helpful

KallieReviewed in the United States on July 25, 2021
4.0 out of 5 stars
Great story, weird story-telling
Verified purchase
The acting, the story & the music for this film were all great... the only odd thing was the way the story was told. There were odd cut scenes, weird pauses... the directing needs assistance. But what do I know? I'm 29, I live alone & rented this movie strictly to see MGK. K bye.
6 people found this helpful

David LamoreauxReviewed in the United States on July 30, 2021
2.0 out of 5 stars
Awkward and Lazy
Verified purchase
This thriller isn't very thrilling, with a very predictable plot and subpar dialogue. Some of the scenes had me scratching my head and wondering if the director was even present while filming. Bruce Willis phones in a few lines, the main cop character played by Emile Hirsch was like a two-dimensional cutout of what someone apparently thought a Florida State Police Officer should be like, and Megan Fox, with at least some amount of screen presence, was left holding the bag, with forgettable lines and almost no effort at character development. Even the bad guy, played by Lukus Haas, was uninteresting and just a pale stereotype taken from hundreds of other serial killer films. The attempt to develop a dark and gritty mood just seemed superficial.
And what was up with using Dire Straights' "Brothers in Arms" song, written about the Falklands War, as the main musical backdrop? A great tune but didn't fit the scenes at all.
6 people found this helpful

gooseReviewed in the United States on August 2, 2021
1.0 out of 5 stars
Uggghhh
Verified purchase
I was really excited to see this movie regardless of all the negative reviews. However, the negative reviews were correct. The acting was subpar. The editing was atrocious! And it almost felt like a film that Tommy Wiseau would’ve done, it was very strange trying to get information in parts that didn’t need to be there I don’t know it was very weird wait for it to come out on cable.
6 people found this helpful

UofL AnnetteReviewed in the United States on July 31, 2021
2.0 out of 5 stars
Better Editing Please..!
Verified purchase
I love all the actors.. and the storyline is okay. But the editing is .. how can I say this... BAD.. if you do not look for things like this in a movie.. please enjoy. However, when there's cigarette smoke wafting in front of a character before the cigarette has been lit and the coffee cups move and appear to multiply in the deli scene... little things like that might be distracting.
4 people found this helpful

FelixReviewed in the United States on November 30, 2021
3.0 out of 5 stars
Cinematography is the only thing watchable about this.
Verified purchase
The introductory narration is a little predictable, but entertaining, and that pretty much sums up its theme throughout. The characters seem miscast as the chemistry is clunky. And if there were some sort of Uncanny Valley for acting that is so bad, you almost disconnect from the script entirely, I’d use this film to base its measure. I was constantly distracted from the predictable plot full of cliché one-liners. But not as distracting as Bruce Willis looking plastered the entire film. Has he been sober in any of his recent films? We really need to check in on him!

This would be the perfect movie to put on while you need to concentrate on that big work project. As long as you’re not the kind of person who has to slow down for train wrecks, because this will be enthralling.