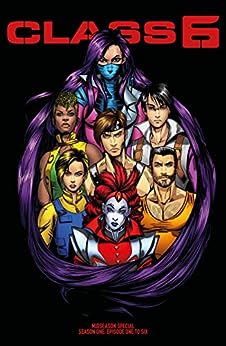 by Fernando Velez (Author), Doris Marcani (Illustrator), Daniel Grimaldi (Illustrator), John Granadino (Illustrator), Marifer Bohorquez (Illustrator), Claudia Viale (Illustrator), Elizabeth Mavarez (Illustrator), Geomar Gonzalez (Illustrator), Pedro Latouche (Illustrator) & 6 more Format: Kindle Edition
Book 1 of 4: Class6
See all formats and editions
Sorry, there was a problem loading this page. Try again.
Episode #1
In this episode, we introduce our first Character, Neveah. She has been hiding her true identity for years, afraid of her long-time enemy, Dr. Tihon. One day another tragedy happens; this time, she knows she can no longer hide. Instead, she must take revenge on Dr. Tihon. When she finally faces her past, face to face with Dr. Tihon, she found herself with a challenging decision; save the LGBTQ hostages that Dr. Tihon uses as guinea pigs to find a cure for homosexuality, or take revenge on him.

Episode #2
In this episode, we introduce our hero Nami, living in his version of reality, he continues to hold on to the past. Nami uses his unique ability to steal from a secretive organization, one that has been trying to find him for a long time. When the time came for Nami to be found, this organization sent its agents to capture Nami. In the end, Nami finally discovers the truth about who is behind this organization, the Nazis.

Episode #3
In this episode, we introduce Jaseri, our Lesbian hero, who was raped by her father to cure homosexuality. Like been raped wasn't enough; her father murders her mother to clean the honor of his family. By then, Jaseri finds out who she truly is, and the special responsibility left to her by her late grandmother. Jaseri discovers she is a descendant from a genetically different human race whose planet was destroyed thousands of years ago by the Reptilians. Jaseri then meets Neveah, who is in Uganda, trying to capture the pastor Scott Lively, who is to blame for the atrocities happening to Uganda's LGBTQ people.

Episode #4
In this episode, we introduce our Drag Hero, Queen Izaar, who feels that the way the world is right now is her fault. Perhaps she is right? In this episode, we learn the role she played in Earth's birth, the great flood, and even religion's origin.

Episode #5
In this episode, we discover Kian, who possess unique DNA. After conducting an ancestry DNA test, he raises concerns, prompting the company to let the US government know about Kian's result. The US government soon captures Kian, but the Reptilian enemy also now wants Kian DNA. A race to decode his DNA has begun. But why is this DNA so important? Because it holds the data of technology never seen before in this Universe because it comes from the Reptilian and Human ancestor's Universe of origin.

Episode #6
In this episode, we introduce Julian, a puppet of the Reptilian race, our enemies. Julian is injected with Kian's DNA samples to try to access information within this unique DNA sequence. The DNA they had wasn't enough since Kian DNA is more complex and secure than they thought. As a result of being injected with Kian's DNA, Julian experiences special abilities similar to Kian's. The Reptilian race will use Julian's unique skills to try and capture Kian, so they can kill him and access the information within his DNA.
Read more
Previous page
Next page
Due to its large file size, this book may take longer to download
Kindle e-Readers
Fire Tablets
Free Kindle Reading Apps
Available on these devices
Next 4 for you in this series See full series
Total Price: $56.96
Books In This Series (4 Books)
Complete Series
Class6
Kindle Edition
Page 1 of 1Start OverPage 1 of 1
Previous page
Next page