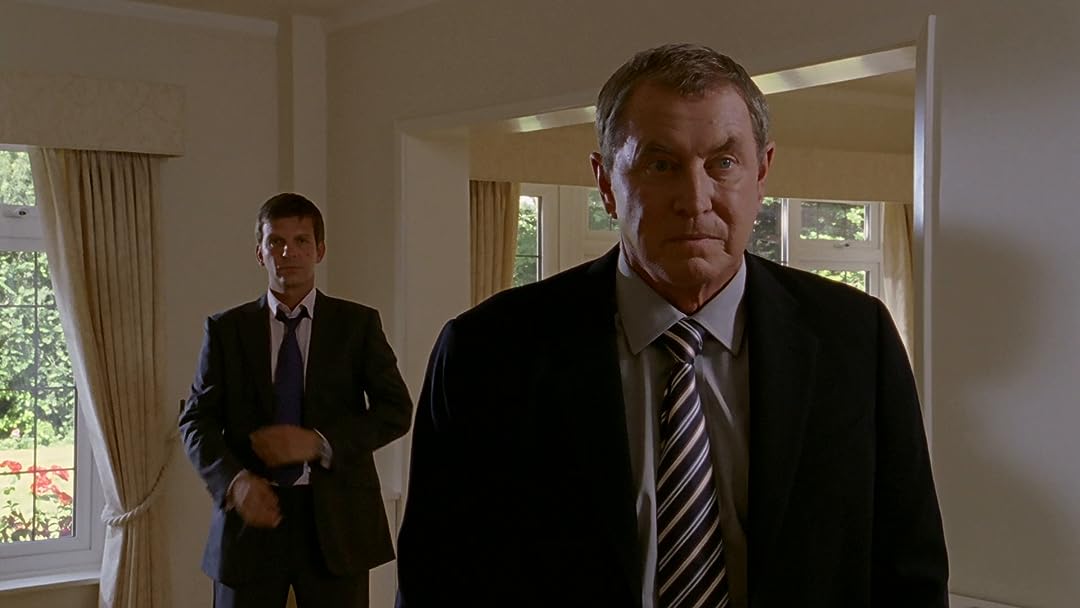 (526)7.82009X-RayTV-14
A veteran DC Inspector (John Nettles) and his fellow detectives investigate murders around the regional community of Midsomer County in this classic UK mystery series.

EinsatzReviewed in the United States on April 23, 2016
5.0 out of 5 stars
“And now he’s a real ghost writer.”
Verified purchase
DCI Tom Barnaby (John Nettles) works his way through 7 more mysteries. Killers are never in short supply in Midsomer.

In The Dogleg Murders, a fancy golf club is the scene of the crime as the haves don’t want the have-nots on their fairway. A golf club proves a handy weapon.
In The Black Book the art world is excited at the prospect of more art by a dead artist. The problem is he didn’t paint them. And someone is willing to torture and kill over this secret.
Secrets and Spies has retired agents still trying to ferret out a double-crosser in their midst. Old grudges never go away.
The Glitch proves worth killing over but not for the reasons everyone expects.
Small Mercies features a model village with an oversized body in its square, pegged down like Gulliver. Dead as a door-nail. No one was sad to see him expire.
The Creeper is a cat burglar with an odd sense of humor and justice. But is the burglar also a murderer?
The Great and the Good deals with a school teacher with a penchant for walking in her sleep. When a body, then two, shows up on her property people begin to wonder if she’s doing more than just wandering in the night.

These seven murders are as inventive as ever with weaponry running the gamut from a corkscrew to a prehistoric skull with very long teeth. Always fun and fascinating, I love this series.

nitemageReviewed in the United States on February 14, 2019
5.0 out of 5 stars
Always a 5+. Sellers please list episodes in descriptions.
Verified purchase
The case containing the DVD's was cracked at the top and the catchers that holds the DVD's were worn which meant the DVD's would not stay in place plus the DVD case will not stay closed. Fortunately the DVD's look okay. As for the series Midsomer Murders is always a five. Midsomer Murders have been repacked 3 times. I rather have the original Series because they have the filmologies as a bonus. I encourage any seller to please list the episodes in their description because the series are renumbered each time so sometimes we wind up have to return a series because we already have it.
4 people found this helpful

Fred SmithReviewed in the United States on February 7, 2017
5.0 out of 5 stars
Possibly the best murder mysteries ever written
Verified purchase
Excellent show. Very will written. Keeps you guessing until the end when the true culprit is revealed. My wife and I discovered Midsomer Murders on PBS a number of years ago and have been true fans of the show. Unfortunately, PBS is somewhat limited in the number of episodes that they show on the air. We were very happy to discover the we could watch ALL seasons and episodes with our Amazon subscription. We started watching at Season 1, Episode 1, and we are now in Season 13 and continuing forward. The series is well worth watching.
5 people found this helpful

A. W. WilsonReviewed in the United States on October 18, 2019
5.0 out of 5 stars
MIDSOMER MURDERS from ACORN USA
Verified purchase
Again - I bought this simply because RLJ ENT have put subtitles on. Here in the U/K Acorn who release here as well, have NO subs on any "Midsomer" Release. Expensive to buy from Amazon.com but worth it for this first class series, and my wife really needs subtitles.
2 people found this helpful

Kristin HindsReviewed in the United States on March 4, 2013
5.0 out of 5 stars
If you like English detectives, you'll probably enjoy this series!
Verified purchase
I've been a Midsomer fan since they were first broadcast in the US; I've found the later seasons available only on video, however. The series in it's 12th season is pretty much what it was in the beginning--a smart, down-to-earth Detective Chief Inspector in a delightful (and fictional) English village setting, solving the myriad murders that dispel the serenity of this idyllic place. Even though the series is set in modern times, viewers will surely get a feel of Agatha Christie's Miss Marple (think Miss Marple with a cell-phone). The characters are engaging and likable; we get a continuing story arc of the leading character's family--a delightful wife, a charming aspiring actress daughter--who often become involved in the cases at hand. It's all very entertaining! So if you have enjoyed Inspector Lewis, Inspector Morse, Jane Marple, et al, Midsomer adds nicely to the genre.
7 people found this helpful

SSDReviewed in the United States on July 12, 2018
5.0 out of 5 stars
If you like really good British television
Verified purchase
If you like really good British television...the Midsomer Murders are for you. The acting is just so good...my family and I have not seen a bad episode yet and we have been looking at the series from the beginning. It makes for a great night of television...the acting, the on location sights and the plots are just so much fun to look at. I highly recommend Midsomer Murders. I will miss the series when it ends.
2 people found this helpful

D.L.Reviewed in the United States on February 13, 2020
4.0 out of 5 stars
Love this series
Verified purchase
Extremely happy with this latest set of dvds. I've now gotten all of the midsomer murder series with John Nettles. Recieved them earlier than expected. The case had cracked and a few pieces of same were scattered in box...but the dvds were fine.
2 people found this helpful

Amazon CustomerReviewed in the United States on June 20, 2019
5.0 out of 5 stars
This one’s a must as you get 7 great episodes!
Verified purchase
One of the best entries of Midsomer Murders. Has 7 great episodes that all live up to this great series. Charm and murder served up in such an enjoyable way!
3 people found this helpful
See all reviews
Back to top
Get to Know Us
Make Money with Us
Amazon Payment Products
Let Us Help You
EnglishChoose a language for shopping. United StatesChoose a country/region for shopping.
© 1996-2021, Amazon.com, Inc. or its affiliates