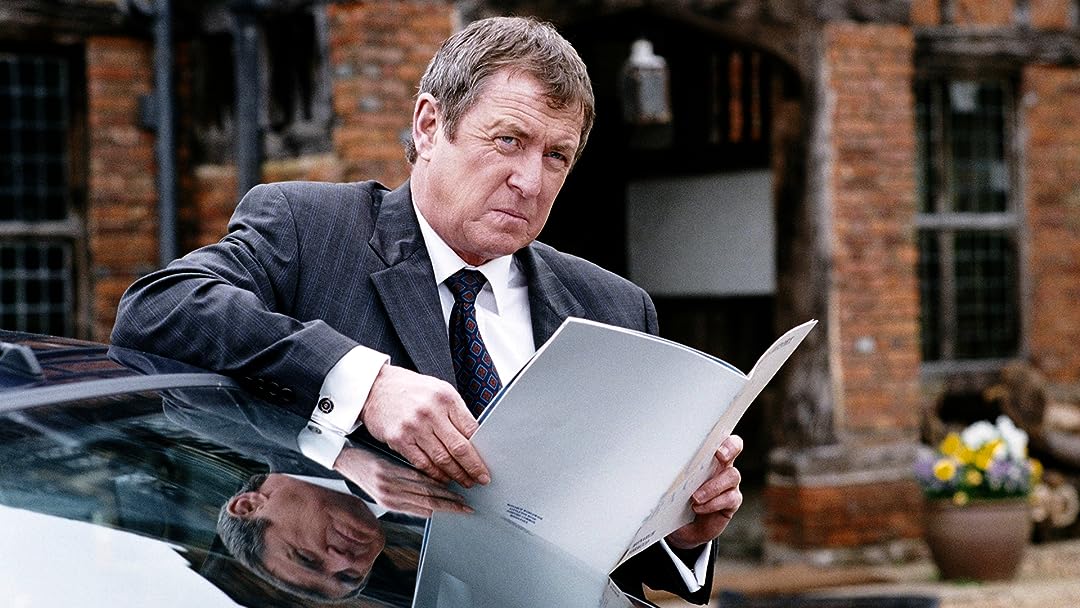 (617)7.82000X-RayTV-14
A veteran DC Inspector (John Nettles) and his fellow detectives investigate murders around the regional community of Midsomer County in this classic UK mystery series.

andreas838Reviewed in the United States on December 1, 2005
5.0 out of 5 stars
Sorting out the Viewing order, Great series!
Verified purchase
Fully in line with my expectations for BBC excellence, the Midsomer Murders series doesn't disappoint. I did find however the Set numbering quite confusing as it didn't seem to correspond to the character developments.

For those new to the series, I would recommend viewing the series in the order in which it was aired, not by the consecutive order of the Set numbers. For instance, "Set 5" is actually Season 1 which aired in 1998. "Set 4" is mostly Season 5 which aired in 2002. Below, is an overview for your viewing convenience.

Whilst this isn't a saga, I do think a production of this quality deserves to be viewed in the correct order. Happy sleuthing!

EinsatzReviewed in the United States on March 4, 2016
5.0 out of 5 stars
“She’s been dying for about six years now. We’re getting used to it.”
Verified purchase
Tom Barnaby (John Nettles) is back with four mysteries to deal with, some more complicated than others. Sgt Troy (Daniel Casey) still hasn’t learned to drive properly and in several of the episodes he’s still given to animosity towards gays, or people he perceives as being gay. Barnaby’s wife and daughter show up in each episode, they put him on a horrific diet in the fourth show (Blood Will Out). Cabbage soup!
They have a formula that works and they are sticking to it. This show is thoroughly enjoyable and quite addictive.
11 people found this helpful

K.StanfordReviewed in the United States on February 20, 2021
5.0 out of 5 stars
GREAT Series
Verified purchase
Need to be able to understand the English Language, some typical English terms and the accent.
GREAT twists, my other half is a retired detective and he LOVES trying to figure out 'who done it'
One person found this helpful

University DocReviewed in the United States on March 3, 2012
4.0 out of 5 stars
Great entertaining set of four episodes!
Verified purchase
First off, Set one is not the first "actual" set in the series. Set 5 is. Set 5 is where the the show actually begins.
This set of episodes is both witty and entertaining, as it is intelligent. I fell in love with this show by accident and have enjoyed each episode I have watched thereafter. Each episode stands out on its own.
Death's Shadow takes place in the town of Badger's Drift and an unsolved death from 30 years before.
Strangler's Wood involves the strangling of a spokeswoman and Brazillian cigarettes, which brings up unsolved strangulations of years before.
Blood Will Out- involves rival clans and long time secrets.
BeYond the Grave- Formers Fawlty Towers actress Prunella Scales stands out in this episode involving ghosts and shadows of the past and present.
The characters are all well drawn, and the chemistry between Barnaby and Troy is a father/son, mentor/prodigy one.
All are well done. If you are into British Mysteries, like me, you'll find yourself trying to figure out the identity of the killer.
9 people found this helpful

Dianne FosterReviewed in the United States on December 28, 2004
4.0 out of 5 stars
Great entertainment for Anglophiles....
Verified purchase
This is the DVD series where it all begins - `The Midsomer Murders' that is. The first thing you might notice in Series #1 is that both Barnaby and Troy had longer hair and were lighter back then, even though we learn through the series that Barnaby's wife and daughter have tried their best to hold the calories to a minimum where the older detective is concerned-even while his younger colleague chomps away on doughnuts and chips whenever the mood strikes. The series provides plenty of escapist material for Anglophiles who want to take an armchair trip to a fantasy-land where nice English coppers keep everyone on the straight and narrow, although a fairly large number of villagers end up dead, and some die horribly.

In these episodes, long-buried secrets are at the heart of more than one murder, so investigative police work means hours spent reviewing archival material while sifting through ancient artifacts - activities sure to stir the hearts of history buffs and Anglophiles alike. This series is well crafted - with great showmanship, fine actors including the many familiar faces of character actors, beautiful bucolic settings in southern England, plenty of interesting artifacts and fine architecture - welcome to fantasy-land my friends.
19 people found this helpful

KMSReviewed in the United States on February 3, 2021
5.0 out of 5 stars
Love British Mysteries
Verified purchase
I have never been disappointed with a British Mystery, My husband and I really enjoyed Midsomer Murders and I am working on getting the whole series.
One person found this helpful

linaReviewed in the United States on April 1, 2020
5.0 out of 5 stars
I got for my birthday
Verified purchase
I love this series and when I couldn't get it on TV I asked for it for my 69th birthday. my honey was so sweet to find the beginning of the series, I am sure I will be purchasing the ongoing series in the future. so glad I can just order it and it's on my porch within days. thanks
One person found this helpful

Carol LReviewed in the United States on May 7, 2012
5.0 out of 5 stars
Great British mysteries
Verified purchase
I discovered this series while bored during bad weather recently. I decided to `TiVo' it, but then decided that I wanted the DVD's for myself after finding them to be incredibly humorous, suspenseful and not at all predictable.
The main characters are believable, humorous and very well written and acted. The stories are as well, without the usual ability to figure out `who-done-it' almost as soon as the crime has been committed.
My only complaint would be that, as they are two-hour episodes, they are rather expensive to purchase. Only 4 episodes in a `set' and there are at least 20 sets!
It will take me awhile to get them all, but as I have become addicted to them, I will manage somehow!
3 people found this helpful
See all reviews
Back to top
Get to Know Us
Make Money with Us
Amazon Payment Products
Let Us Help You
EnglishChoose a language for shopping. United StatesChoose a country/region for shopping.
© 1996-2021, Amazon.com, Inc. or its affiliates