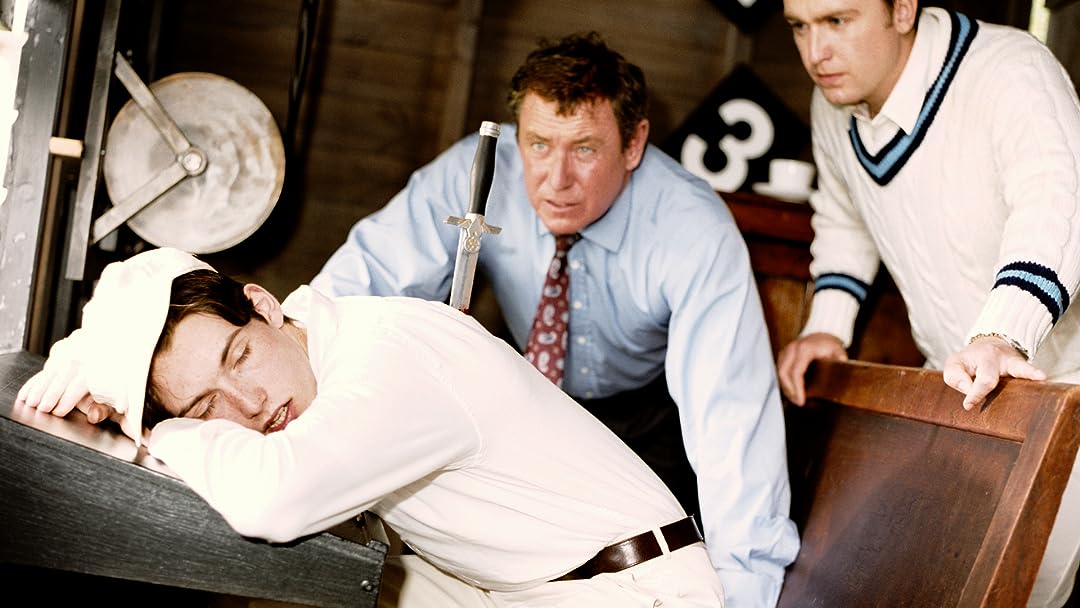 (255)7.81999X-RayTV-14
A veteran DC Inspector (John Nettles) and his fellow detectives investigate murders around the regional community of Midsomer County.

Timothy A. MettsReviewed in the United States on March 28, 2020
2.0 out of 5 stars
Glad it was cheap
Verified purchase
The labeling of the episodes may be the correct names, but the episodes themselves are not the right episodes in the right order. The first episode of Series two is actually the fourth episode of Series 3. I purchased Seasons 2 and 3 digitally, and it was a bust, but it was cheap. This is my 4th time watching the series (only John Nettles episodes), and I can't even watch everything I should be able to. I might just go with Acorn or something. This is my first series buying experience with Prime and it will probably be the last. I have zero problems with movies though.
6 people found this helpful

SpudzReviewed in the United States on February 5, 2013
5.0 out of 5 stars
Like them....
Verified purchase
My wife and I are not very impressed with what is offered on TV lately. We have taken to buying Murder She Wrote, Perry Mason, Matlock, Diagnosis Murder, etc..... series on DVD and watching those. Having watched those series at least twice, we were looking for something new. I saw these on Amazon and decided to try them. We love them. We are not real film critics, we just like trying to solve an entertaining murder mystery. At first we thought these were below our sleuthing skills, until we got to the end of the first mystery and realized neither of us had identified the culprit correctly. 3 discs later and we still are having trouble getting the killer pegged. We like them, and since it is a British show, we never saw them before. We are going to buy the next set in the series and recommend them for a relaxing evening of solving the crime.
11 people found this helpful

SanteriaReviewed in the United States on February 27, 2006
5.0 out of 5 stars
Unsurprisingly Good
Verified purchase
To be Honest , I never thought I would get Hooked on these shows. However, Box 1/Set 1, was Very Good, and Set two surpasses the quality in writing, and superb acting. Great production values are still par for the course, and whilst the sets may be a bit over-priced, sometimes Amazon offers good deals, and at the base of it all, this stuff works in the hand of past masters.
The Second string players, are not second rate actors, in fact, you basically find a who's who of acting. Now, if you know the NINTH GATE, one actress appears in this set who plays the Baroness in GATE, but is soooo different.
The stories: Dead Man's Eleven, Death of a Stranger, Blue Herrings, Judgement Day, are all superb; each one has so many twists , turns and convolutions that to comment on any disc is to give something away.
In many respects it is like a thinking man's CSI, without the false CSI stuff that mis-leads.
All in all, a very intriguing set that just shows that British detective Drama has few contempraries, outside of a Chris Carter show like MILLENNIUM... after all, The Plays the Thing !!!

Woven yarnsReviewed in the United States on May 8, 2013
5.0 out of 5 stars
First rate service
Verified purchase
The seller replaced at their own cost one dvd, which belonged to Set One and their response via Amazon was speedy and courteous.
I shall certainly use them again. We love the Series and are gradually building up our library by purchasing them piecemeal. This is a long running series, which speak of its success and the plots are never boring. The unexpected happens and despite our many efforts we can never guess who the real villain is. That's what makes them so interesting and fascinating. The producers pick some of the most picturesque English villages and locales which are an added bonus to the mystery. We often stop the film just to feast on the English cottages with their beautiful gardens and village greens.
3 people found this helpful

K.StanfordReviewed in the United States on February 20, 2021
5.0 out of 5 stars
GREAT Series
Verified purchase
Need to be able to understand the English Language, some typical English terms and the accent.
GREAT twists, my other half is a retired detective and he LOVES trying to figure out 'who done it'

Dianne FosterReviewed in the United States on December 28, 2004
4.0 out of 5 stars
The murders continue in spite of good cops....
Verified purchase
Is there such a thing as a perfect English village? Just ask the average Anglophile and you are sure to find out the answer. Undoubtedly, the village is a Midsomer entity, where coppers Barnaby and Troy help maintain the status quo. What makes this series so delicious is that you can feel so cozy even while evil villagers creep about killing their neighbors. Barnaby's demeanor and Troy's earnestness put me in mind of Morse and Robbie at times, although Barnaby is much cozier than Morse ever was.

The `Midsomer' mysteries are a real treat for Anglophiles and provides hours of escapist viewing into a world that never was although we might believe it exists if we wish hard enough -- only you should never get to England and read a British newspaper, or view BBC-America's grittier dramas and newscasts.

I have purchased all four sets of the `Midsomer Murders' dramas and enjoy watching them fairly often. We will watch them many times in the future as they provide a reliable form of escapism - we don't play computer games or use other kinds of diversion - we rely on the English to entertain us.
20 people found this helpful

Hope L FranksReviewed in the United States on June 12, 2021
2.0 out of 5 stars
Interesting love these shows.
Verified purchase
Love the mystery but the disc on one of them is not watchable and the others you must turn volume up completely all the way and you still have to strain to hear it.

Mary TempletonReviewed in the United States on July 16, 2008
5.0 out of 5 stars
Great Mystery Series
Verified purchase
Midsomer Murders has long been one of my favorite mystery series. The interactions between the characters are very real, and certainly a nice change from series where the boss is always opposing the main character, so he/she has to overcome their opposition as well as finding the criminal. Inspector Barnaby is one of the few detectives in fiction who has a normal relationship with his family, which is refreshing.

Blue Herrings is one of my favorite episodes. Barnaby's relationship with his aunt is one I can identify with--he obviously cares for and respects her, instead of regarding her as someone to humor.
3 people found this helpful
See all reviews
Back to top
Get to Know Us
Make Money with Us
Amazon Payment Products
Let Us Help You
EnglishChoose a language for shopping. United StatesChoose a country/region for shopping.
© 1996-2021, Amazon.com, Inc. or its affiliates