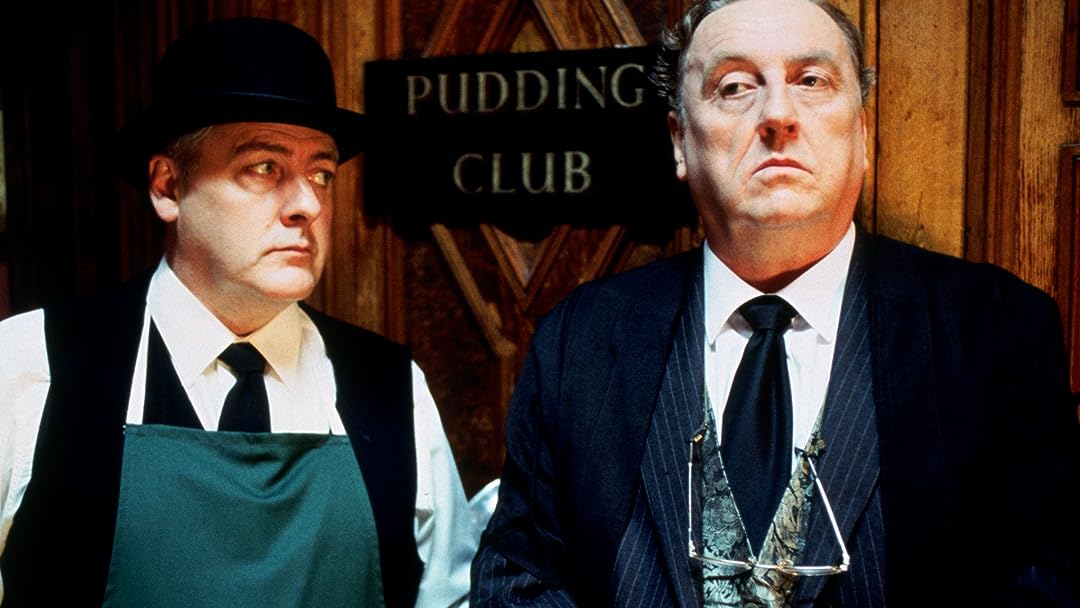 (345)7.72002X-RayTV-14
A veteran DC Inspector (John Nettles) and his fellow detectives investigate murders around the regional community of Midsomer County in this classic UK mystery series.

Jerry FlackReviewed in the United States on July 9, 2021
5.0 out of 5 stars
Great Series
Verified purchase
This collection of five episodes in the early years of Midsomer Murders is among the best of the series. I was a bit disappointed when I opened the case and found that the three DVDs were stacked upon one another. That has proved a good way to find scratches on the disks. Fortunately, I have paper & plastic disk envelopes that I can use to store the disks. It is the first and only time a Midsomer case has come in that manner. The episodes are very well crafted. The ensemble of actors is outstanding and the plots are spellbinding and never guessed (by me) until the climax of each film. The scenery, music, and direction are all superior. I have never read the books upon which the series is based, but I have to believe that the author is pleased with the BBC adaptations. Great buy. Prompt, even early delivery.
Report abuse

EinsatzReviewed in the United States on March 14, 2016
5.0 out of 5 stars
“And now he’s dead in a ditch, poor little sod.”
Verified purchase
Five mysteries featuring DCI Tom Barnaby (John Nettles) and his faithful, albeit a bit dim, sidekick Sgt Troy (Daniel Casey). In this set, the first mystery is Tainted Fruit, where a nurse is framed for several murders that may, or may not, have anything to do with an old man’s death, due to a leaky roof. Number two is Market for Murder, where a book club is anything but a book club. Obsession is the order of the day and they didn’t get that out of a book. Number three is A Worm in the Bud. Bodies are not bodies until they are moved. Revenge isn’t sweet, it’s inspired. Mystery number four is Ring Out Your Dead. A longstanding grudge goes a bit too far. And lastly, Murder on St. Malley’s Day. The Devington School of snobs teaches their students more than just the classics. They even have their own hitman!
Through it all, Barnaby remains steadfast. And so does Sgt Troy, he still hasn’t learned to drive properly, and he only seems to stumble onto clues by accident. How he got to be a sergeant is anyone’s guess.

As ever, these mysteries are absorbing and fun to watch.

Z HayesReviewed in the United States on January 5, 2012
5.0 out of 5 stars
Murders most foul in Midsomer County
Verified purchase
Midsomer Murders is a fine example of British cozy mysteries (inspired by the novels of Caroline Graham), without going over the top on the gore factor. Set in the bucolic English villages in Midsomer County, the murders that occur here(at an alarmingly high rate, one might add) are in stark contrast to the serene beauty of the English countryside. The murders can be grisly, but this is often offset by the scenic country setting, and the witty dialogue (Amazon Prime members are able to view Midsomer Murders' episodes via instant download for free).

DCI Tom Barnaby (John Nettles) leads a relatively contented life with his wife Joyce (Jane Wymark) and works for the Criminal Investigation Department. Assisted by his detective sergeant Gavin Troy (Daniel Casey), the pair find themselves going all over the county investigating the strangest and at times grisliest murders in little hamlets with innocent sounding names. Tom is a meticulous investigator and an astute observer of human nature. His methodical investigative methods and keen eye contrast with DS Troy, who is prone to making politically-incorrect statements and often blunders to the wrong conclusion regarding the identity of a particular murderer.

The episodes in Season 5 are:
Tainted Fruit - a spoilt rich brat named Melissa Townsend ends up dead, but given the victim's nature, the list of suspects is long. Barnaby and Troy investigate and make some interesting discoveries.
Market for Murder - one of my favorites. Someone is picking off the members of a women's only book club. Turns out, the book club was not about reading at all, but something else entirely.
A Worm in the Bud - Barnaby and Troy investigate the murder of a woman who was assumed to have killed herself.
Ring Out Your Dead - only in Midsomer Murders would you find an entertaining plot where bell ringers are targeted for murder.
Murder on St. Malley's Day - when the son of a prominent alumni of Devington School is killed, Barnaby and Troy investigate, and discover that the death may be linked to The Pudding Club at the school, where membership is exclusive and highly coveted.

There is a Gothic feel to many of the crimes, which is enhanced by the unique music chosen to accompany a particular episode. At times, certain scenes seem overly exaggerated, but to me, they only add to the charm of the show. This is a great example of atmospheric crime dramas with a wonderful ensemble cast and riveting storylines. Midsomer Murders will appeal to fans of British cozy mysteries, where blood and gore take a backseat to wit and humor, and the focus is on investigations set amidst a bucolic, close-knit setting.
13 people found this helpful
Report abuse

Bear OneReviewed in the United States on August 11, 2019
5.0 out of 5 stars
Great Fun for British Mystery Drama Fans
Verified purchase
I love the long-running mystery series of Midsomer Murders. The stories combine English village coziness, interesting well-developed plots, humor and, of course, mystery. This particular series is not as "nitty gritty" and grim as some British mystery series can be. I hope to be able to purchase further editions of this series in the future. If you like British mysteries with a twist of light humor you will love this series.
One person found this helpful
Report abuse

J. KeyserReviewed in the United States on January 29, 2017
5.0 out of 5 stars
Bloody (literally) good British detective series set in the English countryside
Verified purchase
A fine British police procedural, requiring a minor suspension of disbelief, given that there are, on average, three related murders per episode. That would give lightly populated and bucolic Midsomer a per capita murder rate somewhere north of Chicago's. But DCI Barnaby and Sgt. Troy always get their man (or not infrequently, woman) using reason, psychological insight and lots of shoe leather rather than the violence and derring do that characterize U.S. detective dramas. And, as always in BBC detective series, the filming is all on location, in this case, the villages and country estates of Midsomer, a county filled with well-tended gardens of flowers and a full complement of eccentric and lethal characters. Highly recommended.
Report abuse

BhannaoneReviewed in the United States on October 4, 2016
5.0 out of 5 stars
For fans of British MM
Verified purchase
Wow! There are a LOT of murders in the Midsomer area. I had always thought of he homelands od England as quiet, sleepy, normal. Turns out it't chock full of strange people committing strange crimes (not just murder). Watch out for the lurker in the bushes, there's at least one in every episode. Also, everyone is sleeping with everyone else, except for the Chief Inspector's family, who seem to be rather normal, compared to everyone else. It's been on for about 18 years, the seasons are only 4 to 6 episodes long, the shows last an hour and a half to two hours, and occasionally the same actors show up as the cousins of their previous incarnation. Entertaining, if you are into Brit mysteries. I am.
Report abuse

Amazon CustomerReviewed in the United States on May 18, 2021
5.0 out of 5 stars
The earlier episodes of this series were/are great
Verified purchase
Clearly inventive, surprising endings and I enjoy John Nettles as Chief Inspector Barnaby. The dynamic between him and his partner add a fun aspect and the family life rounds him out as a character. These early episodes are not often seen on TV so I wanted to add them to my personal collection.
Report abuse

ShawsParkTNReviewed in the United States on February 9, 2019
5.0 out of 5 stars
Buy with caution
Verified purchase
I love all the Midsomer Murder stories, BUT when I buy additional videos I expect to see different mysteries. I just bought 7-8-9-10; the last came later than the first three and when I wanted to watch it, found it was the exact same ad #13, which I had purchased about a year ago! Don't like being jiggled when spending my once-a-month money... Y'all.
Report abuse
See all reviews
Back to top
Get to Know Us
Make Money with Us
Amazon Payment Products
Let Us Help You
EnglishChoose a language for shopping. United StatesChoose a country/region for shopping.
© 1996-2021, Amazon.com, Inc. or its affiliates