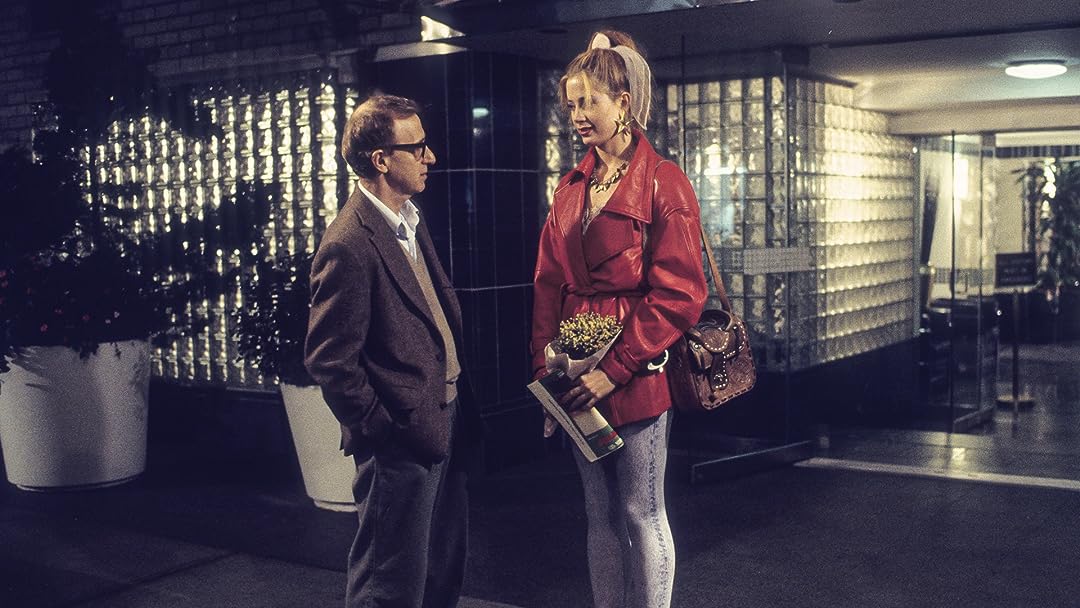 joel wingReviewed in the United States on November 17, 2021
4.0 out of 5 stars
Throwback to when Allen was tyring to throw in jokes into almost every scene
Verified purchase
Mighty Aphrodite is a throwback for Woody Allen. That’s because it’s a straight comedy. The story is about hubris and love. Allen finds the mother of his adopted child Mira Sorvino and feels responsible for her. Part of that becomes finding her a lover. There’s a chorus of actors dressed like an ancient Greek play who give commentary throughout the film. They’re the ones who keep on saying that Allen is acting out of hubris believing that he can play god with Sorvino’s life. They also have a lot of comedic moments like when they call Zeus for help and they get an answering machine. I really enjoyed the film from start to finish. Now I wasn’t laughing out loud but I liked the writing and the wit. I miss these types of Allen films because he’s trying to be too serious these days in too many of his releases.
3 people found this helpful

Gusano VerdeReviewed in the United States on March 1, 2016
5.0 out of 5 stars
Lighthearted, fast, and funny.
Verified purchase
This very funny and irony-filled film from the mid-90's is one of my favorite Woody Allen movies. He was moving on from the Mia Farrow fiasco and was immersing himself in some really funny, fresh, and creative writing. The genius in this film lies in the structure provided by an all-star Greek chorus, giving us narration to the movie (Oedipus's mother telling us she'd hate to mention what they'd call her in Harlem), and also popping unexpectedly into scenes... like when F. Murray Abraham, dressed up in his robe and mask, hands Woody a pencil so he can write down a hooker's phone number. That hooker is Mira Sorvino, playing an occasional porn star (Judy Cum) who doesn't know she's the mother of Woody's adopted son. Woody, ignoring the warnings of the Greeks (still they want to know how she was in bed), hopes to learn of his child's ancestry. So he sets up a meet with hooker Mira, who is hilarious in her depictions of her sordid past (she won an Oscar for this slightly over-the-top performance) as Woody tries to help her find a straight path. The results of this endeavor are quite hysterical and unexpected, so check it out. It makes a nice statement on love and fidelity and parents and children and irony, and on fate, as I suppose all of Woody's films strive to do. Lighthearted, fast, and funny.

I purchased the Blu Ray and I am very satisfied with the fidelity of the video and the audio. Great to have the Woody movies on Blu Ray, but they are kind of expensive.

Amazon CustomerReviewed in the United States on June 18, 2022
5.0 out of 5 stars
Delightful, funny, clever, silly, warm comedy with heart.
Verified purchase
Allen struck just the right balance here, crafted a joyful, clever, comedy - with relatable, meaningful themes, executed lightly, not too cerebral, and with some broad humor. His own character plays quite well in the film, not quite as neurotic and heavy-handed, with a little more heart and a slightly more personable and likeable portrayal than many of his acting roles. Mira Sorvino is delightful. Good direction, great cinematography, and wonderful use of the Greek chorus. Good fun, one of his better comedies.
2 people found this helpful

B. MaroldReviewed in the United States on May 7, 2005
5.0 out of 5 stars
Woody's Greek Fantasy. Warm and Funny. Buy It.
Verified purchase
`Mighty Aphrodite', written, directed, and starring Woody Allen seems to be the kind of movie Allen makes after he is worn out doing a strictly realistic, mostly serious movie such as `Crimes and Misdemeanors', `Hannah and Her Sisters', and `Husbands and Wives'. Unlike these excellent seriocomic works, `Mighty Aphrodite' flies off into a world of fantasy similar to the crazy / inventive situations in `Zellig' and `A Midsummer's Night Sex Comedy'.

Allen brings along with him his usual band of big name actors taking off from more remunerative roles to have some fun with this lighthearted comedy. As usual, heavyweights such as F. Murray Abraham, Claire Bloom, Jack Warden, and Olympia Dukakis have such small roles that you hardly notice they are there until they are off screen. In the case of Abraham and Dukakis and Allen stock player David Ogden Stiers, this anonymity is heightened by the fact that they are playing masked members of a Greek chorus, filmed in a ruined Roman amphitheater, in Italy, according to the location credits.

This movie was done for Mirimax and a sizable number of new names appear among the film's executive producers, although I am certain Allen still has his hands firmly on the artistic reins for the filming of the movie. I have no idea which of these new names represents `Sweetland Films', but their only contribution seems to have been a slightly less austere credit crawl at the end of the flick.

Aside from Allen, all of the really heavy lifting on the screen was done by title character actor Mira Sorvino, and it is beyond me how she was nominated for the supporting actress Academy Award and not in the lead actress category, although I suspect it did improve her chances of winning in the lesser category, which she did.

Of Allen's two most important movie subjects, love and death, love is certainly the main issue in this movie, signaled by the fact that Aphrodite is the name of the ancient Greek god of love, represented in this flick by Sorvino's character who is a prostitute and pornographic movie actress who wants to get out of that life and settle down in a more normal setting.

Allen plays a successful New York City sportswriter who gets connected with Sorvino when he and his wife decide to adopt a baby boy, and Allen becomes obsessed with the identity of the real mother, who turns out to be Sorvino. While Allen tries to set Sorvino up with a farmer turned boxer turned farmer, his wife (Carter) hooks up with a business partner (Peter Weller) who threatens to break up their marriage.

While there are a few brief moments of apparent danger when Sorvino's pimp threatens Allen's life if Sorvino quits, the pimp is bought off with nothing more than a pair of courtside tickets to a Knicks game. While the main `realistic' plot is pretty improbable as it is, the real silliness is going on in asides to a full masked Greek chorus very similar to what you would find in productions of plays by Aeschylus, Sophocles, and Euripides. Thrown into this absurdity is Jack Warden playing a modern blind man named Tiresius encountered on the streets of New York. The joke is that Tiresius is the name of a character in Sophocles' `Oedipus Rex' who makes the prophecy that Oedipus will kill his father. In Allen's version, Tiresius simply clues Allen into the fact that his wife is fooling around with her business partner.

The invocations of the Greek choruses get even more silly as the movie progresses, with the chorus appearing in modern New York near the end of the film, bursting into renditions of Cole Porter and tunes from other modern composers.

Like `Zellig', there is no attempt to avoid straining credulity. Near the end of the movie, Sorvino is rescued from her life of sin by a totally improbable `deux ex machina', which Allen glorifies by simply describing it as such in the voice-over.

This movie is about as close as Allen ever comes after `Annie Hall' to returning to the silliness of early movies such as `Bananas' and `Sleeper'. Unlike the early gag fests, you really feel for the characters in this movie. You don't want Allen to break up with his wife and you want Sorvino to get out of her sex business. And, we are much happier at the end of the movie than we are at the end of `Crimes and Misdemeanors' where a killer escapes justice and the nebbish gets cheated out of his girlfriend.

This is not one of Allen's very best movies, but it is in the upper half. Sorvino's performance is definitely worth the price of admission.

HwangReviewed in the United States on May 10, 2013
5.0 out of 5 stars
Greatest Comedy Ever Produced
Verified purchase
Woody Allen's Mighty Aphrodite can be considered the greatest comedy ever written and directed by the maestro; presented in the most iconoclastic form ever conceived on film.

The movie begins with Woody, being short on sperm count, and being unable to conceive, adopting a baby who grows up into a precocious child; and developing a strong curiosity regarding the mother of the child, and being under the impression that the mother must have possessed a high degree of intelligence, seeks out to find the natural mother only to discover, after several false leads, that she is a prostitute who used to work in the porn industry. Featuring a relatively unknown actress, who graduated from California State University Fresno, as the supporting actress - who provides a relatively convincing performance as the naive but cute dumb blonde, the movie revolves around Woody's growing relationship with her and the increasing interest he has in seeing her take a different turn in career, and secure a decent job that does not involve prostituting herself, and hence introducing her to a guy from the farm who is oblivious of her past but eventually spurns her upon realizing that she has had sex with an inordinate number of men.

The narrative of the movie is told in an iconoclastic style with a Roman setting comprising a chorus of people clad in Roman garb putting things to question and beseeching Zeus for divine intervention, with Woody occasionally stepping into the picture to engage in a tete-a-tete with them and even features a blind Tiresias, the entire narrative intervention being interspersed throughout the movie.

wilcox660Reviewed in the United States on May 10, 2016
5.0 out of 5 stars
Aphrodite Revisited.
Verified purchase
I just watched this again after some 10 years. A stellar cast, but Mira Sorvino just glows in her role. A Woody Allen film with tons of heart. I remember watching it several times in the theatre back in 1995 and being utterly charmed. Some 21 years later I'm happy to say it's lost none of its warmth & wit.
8 people found this helpful

jhmochaReviewed in the United States on February 25, 2014
5.0 out of 5 stars
Be careful! Region 2 dvd
Verified purchase
It doesn't say this anywhere in the description but this is a region 2 DVD which requires a region 2 DVD player, or needs to be played on a computer. I noticed the little red circle in the bottom of the picture and (even though I live in region 1) was willing to buy it because I watch most DVDs on my computer, but I am very surprised they are not mentioning it in the details for this product. Wonderful movie though. One of my favorite Woody Allen films.
2 people found this helpful

RubensteinReviewed in the United States on February 12, 2020
5.0 out of 5 stars
a Woody Allen classic
Verified purchase
a Woody Allen classic, very funny! Not sure Mira’s performance was Oscar worthy though
2 people found this helpful
See all reviews
Back to top
Get to Know Us
Make Money with Us
Amazon Payment Products
Let Us Help You
EnglishChoose a language for shopping. United StatesChoose a country/region for shopping.
© 1996-2022, Amazon.com, Inc. or its affiliates