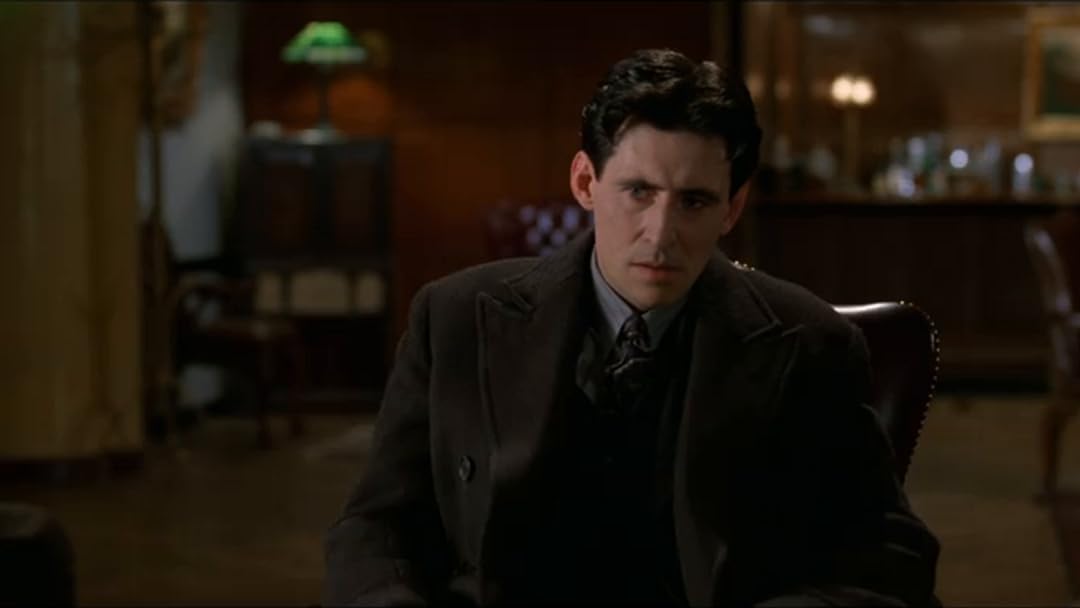 (1,978)
7.71 h 54 min1990X-RayR
The right-hand man of an Irish mob boss plays all the angles in a Prohibition gangland story filled with dark emotion - from the creators of "No Country For Old Men", with Marcia Gay Harden.

prisrobReviewed in the United States on June 2, 2017
5.0 out of 5 stars
Nobody Knows Anybody
Verified purchase
What you see in Miller's Crossing is not what you get, believe me. This film belongs to Gabriel Byrne who plays Tom Reagan. Tom is a hero, anti-hero, maybe, in this gangster film. The Coen Bros, those wonderful film guys, have written and directed this film. You can tell from the very beginning when this marvelous music overpowers you that a Coen film is here.

Tom Reagan is an assistant of sorts to Leo, played by Albert Finney. Leo is the crime boss, and the entire city revolves around him. Both Tom and Leo have an affinity for Verna, played by Marsha Gay Harden, though Leo is at first not aware of this. Jon Polito who plays Johnny Caspar, Leo's opposite. John has a thing for "business ethics.", which makes me laugh when you see his temper and his antics. One of the most interesting characters is Bernie Bernbaum, played by John Turrtora. A weasel loved by his sister, Verna, and for whom everything falls apart. The action is violent, beatings a plenty, gunfights a plenty, lots of booze, some sex, but nothing seen. A Coen film must be seen.

Amazon CustomerReviewed in the United States on November 1, 2016
5.0 out of 5 stars
Coen Brothers Mob Movie
Verified purchase
If you don't know about Coen movies, then you need to start. This is a solid member of the Coen brothers arsenal of fascinating, layered, thoughtful but suspenseful movies. Coen brothers can get a little weird, though (Barton Fink), so if you don't have the stomach for the weirdness of Coen Brother's, don't worry, this stays within the mob movie genre to make anyone who enjoys a good mob movie happy, while pushing the edges of the genre - as Coen brother do - to make it interesting and tantalizing for people who are a bit bored with Godfather and Goodfella re-runs. This is more an early era mob movie, which makes it a little different than the typical genre, and doesn't attempt to mirror real mob history at all, so it's much more playful in that sense. But the characters are entertaining and easy to connect to.
17 people found this helpful

M. ErcolinoReviewed in the United States on July 24, 2016
5.0 out of 5 stars
Own this!
Verified purchase
Classic. I love the Cohen brothers and this movie is a masterpiece. The dialog, the scenery, the costumes, and the character plots!! Great stuff. If you like any of the other Cohen brothers movies, this is a movie that will be the capstone on your collection. Typically the Cohens get the weird, the banal, the dysfunction, the cinematography and the complex all in one place and this movie is the essential example of that incredible impossible confluence. This movie is brilliant no matter what metric matters most to anyone.
19 people found this helpful

Thad BrownReviewed in the United States on May 30, 2016
5.0 out of 5 stars
Still one of my favorite movies ever
Verified purchase
Still one of my favorite movies ever. Very atypical for a Cohen Brothers film, narratively, sonically, an photographically, but somehow they got it all so right. The performances are outstanding, Gabriel Byrne, Albert Finney, John Torturro, Steve Buscemi, and everyone else, I mean literally everyone else, does a great job. But Marcia Gay Harden absolutely mops the floor with all of them. I only wish she had gotten more roles like this one to work with, she was clearly up to the challenge.

I often joke, 'Everything I ever needed to know I learned from Miller's Crossing or Clausewitz.' Great movie, just watch it every few months to notice more stuff.

Wayne KrausReviewed in the United States on November 5, 2020
5.0 out of 5 stars
neglected masterpiece
Verified purchase
This is perhaps the Coens' most undervalued film. It had the misfortune of hitting the theaters the same weekend as Goodfellas and got buried at the box office, and would have been forgotten if not for the Coens' later successes. It is perhaps the most visually beautiful of their films, and the mellow Celtic soundtrack magically adds a quality not found in the film's content. It is sorrowful, pensive, winsome, nostalgic--not the sort of music one typically hears in a gangster film, but it works.
2 people found this helpful

happy camperReviewed in the United States on August 25, 2020
5.0 out of 5 stars
The irish rule the city but here come the i ties.....
Verified purchase
Strange mob movie in the Coen bros arsenal. Marcia Gay Hardin and Gabriel Byrne s best acting job of their careers. J.E.Freeman is great also. It all takes place in a New England town lets say Boston where the irish outnumber all other nationalities. Don't miss this one , the irish music will lure your interest , the acting will encompass all. One of my all time favorite mob movies which include the Godfather 1 and 2 , Once upon a time in Queens and or America.
One person found this helpful

Gabriel Byrne brings an awesome gravity and seriousness to the role, and this movie does the opposite of insulting your intelligence. The plot is a little overly complex, but the emotionality, tone, and acting are a knockout-along with the screenplay. Shame that this movie is not iconic and listed along with the classics, a true triumph for the Cohen Brothers early in their career.
4 people found this helpful
See all reviews
Back to top
Get to Know Us
Make Money with Us
Amazon Payment Products
Let Us Help You
EnglishChoose a language for shopping. United StatesChoose a country/region for shopping.
© 1996-2022, Amazon.com, Inc. or its affiliates