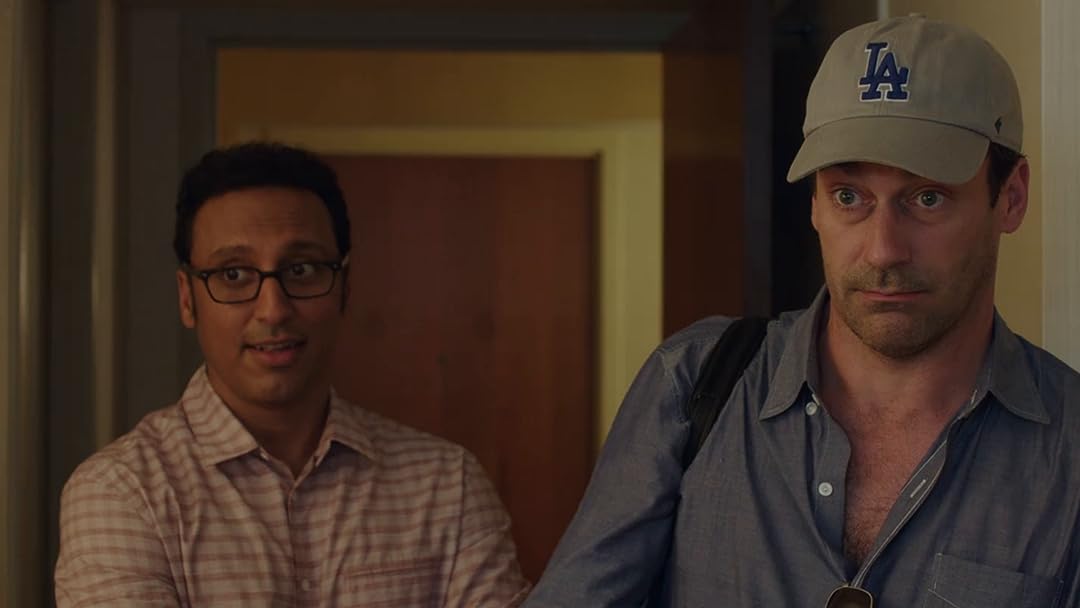 (2,219)
7.02 h 4 min2014X-RayPG
A struggling sports agent lands on an unconventional idea - recruit the best cricket players from India via a reality tv show, then train them to become major league baseball pitchers! Based on a true story.

MDLIONReviewed in the United States on April 12, 2015
4.0 out of 5 stars
Entertaining baseball movie
Verified purchase
I liked this baseball movie so much when I saw it at a theater last year that I recently decided to buy it on Blu-Ray as a birthday gift for my brother, a lifelong baseball fan. Based on a true story, sports agent J.B. Bernstein (Jon Hamm) must find and sign a top prospect or two, or his agency is going under. One day while switching between a cricket match from India and footage of Susan Boyle singing on "Britain's Got Talent", Bernstein has a brainstorm and decides he wants to have a reality show in India in which a cricket player is groomed into a Major League Baseball pitcher. His assistant is Ash Vasudeuan (Aasif Mandvi).

To aid them in the search for a pitcher, they bring in veteran scout Ray Poitevint (Alan Arkin), a scene stealer as usual with his dry, cynical, cranky sense of humor. As the initial tryouts for the reality show begin, Poitevint's eyes are closed as he only listens for a good "pop" of the catcher's mitt. At first the pitcher-wannabes are only hitting the mid 40s to high 30s. But Poitevint's eyes open as he starts to hear a few of the healthy "pop"s he is listening for.

I pitched from a Major League mound to home plate distance of 60 feet 6 inches at a local batting cage a couple of years ago. I only hit 39, fell off from there, and my arm hurt the next day. My Major League pitching trick would be getting the hitters to fall asleep while waiting for my pitch to reach home.

I missed the "Mad Men" craze, but Jon Hamm proves himself a capable actor here, with an ability to effectively do both drama and humor. His character in his workaholism is oblivious to the fact that the beautiful Lake Bell, portraying Brenda Paauwe, is interested in him.

Baseball fans, sports movie fans, Jon Hamm fans, as well as those interested in India or reality shows are among the people who would probably enjoy "Million Dollar Arm".

MercuryReviewed in the United States on October 7, 2020
5.0 out of 5 stars
Baseballs greatest asset talent.
Verified purchase
Investing in a Major League Baseball player should be a sure bet. Unless of course you're a agent who can't get started. This quirky film depicts all the aspects of what an underqualified sports agent should know to sign a player or grow a player for the major leagues and more. Major League Baseball has seen this before but with young rookie American born players who are in the draft or minor leagues. What the majors haven't seen is two up and coming players from India trying to make it in the American major leagues brought forward by a sports agent looking for publicity in one of the strangest moves to get someone signed with a major league baseball contract I have seen. But the film works on so many levels it a great start point from the Indian prospective, about empowerment and two absolute beginners can shine in a tough competitive sport that is usually reserved for the top athletes of America, funny, entertaining, enlightening, recommended.
One person found this helpful

FarsiwanReviewed in the United States on April 15, 2022
5.0 out of 5 stars
Great family movie!
Verified purchase
I love this movie and have watched it half a dozen times with my kids.

GryphonisleReviewed in the United States on October 10, 2014
2.0 out of 5 stars
Feel Good Film That Doesn't Work Very Hard To Make You Feel Good
Verified purchase
JB Bernstein's (Jon Hamm) agency isn't doing as well as he would have hoped with his prime target playing him like Hemingway working a swordfish. He then latches on the idea of a promotion (funded by a Chinese investor (Tzi Ma) in India, to get young Indians who presumably all play cricket (you know, the way every American boy plays baseball) to choose someone over there capable of becoming a Major League Baseball player over here, because, well, that's a billion hats and t-shirts selling over in India when one of their own becomes a baseball star (think of Yao Ming in basketball). So, off to India they go, a group of myopic straight white male sports agents and trainers, to find those capable of pitching a 90mph baseball. It's harder than you'd think, and the two they choose turn out to not play cricket, and don't even like it. One is in track...

So they bring them back to the US where this could have been a hilarious and instructive film if it had been about middle class kids from China or India, or even Viet Nam or Thailand, who come to the US and discover that internet speeds are so much slower than they are back home in their "Third World Country" or that their chip-technology credit cards don't work in a nation still using 20th Century magnetic stripe technology. Or that their cell phones aren't compatible on US networks---it would have been interesting to see them discover how backwards the US has become, and how their hosts, so proud of everything American, come to realize how far the US has fallen behind the rest of the world. But this is not that film.

It's not even the typical film of kids from primitive parts of foreign lands finding themselves in the modern world, in a rich country. These boys turn out to be something like captives, not really taken much of everywhere (not even to Disneyland, in a Disney movie!) except to a glamorous Hollywood Sports Party, full of beautiful people, alcohol and drugs. Bernstein loses his target customer, once again and worse, the boys get drunk, embarrass him, and puke in his car.

And boy does he scream at them! It's all their fault. Except that, it's his. He's responsible for their welfare, and their behavior. They're not suited for the land in which they find themselves, and Bernstein is into the last inning of the movie before he finally realizes he has something of a responsibility for them and he starts to show it. One is not far into the movie when Hamm's character shows himself to be an especially irritating ingrate.

And then there are the stereotypes. Again. Always the idiot native who plays the happy servant of the white masters.

As others have noted, this is no "Money Ball"---that was so much better. "Chef" is so much better. This is surprising for a Disney picture, but it's still just that, and even by that standard this is not a very good film, and Hamm's character really deserves most of the blame.

mositaReviewed in the United States on August 25, 2021
5.0 out of 5 stars
Wholesome and encouraging
Verified purchase
Million Dolar Arm is the true story of the first Indian to play major baseball in the USA. Jon Hamm. as ever, is an excellent actor and played the part of the scout very well. It is a story of hope, perseverance, and faith. I highly recommend it.

Robert I. HedgesReviewed in the United States on August 18, 2016
5.0 out of 5 stars
I Love This Movie, And That's Saying Something!
Verified purchase
Nobody is more surprised than I am by how much I loved "Million Dollar Arm". I was predisposed otherwise as I am neither a baseball nor a Disney fan, but I was completely won over by the charm of the film and its themes of triumphs over personal challenges. Jon Hamm is perfect as struggling sports agent J. B. Bernstein, who stages a contest in India to find Major League Baseball's next two star pitchers. What he finds are two cricket players who deal with homesickness, language, and cultural barriers but persevere in the face of daunting odds and heaps of skepticism. My personal favorite cast member here is grumpy old scout Ray, played to absolute perfection by Alan Arkin.

Based on a true story, this is a fantastic movie: it's entertaining, funny, and poignant; and if you like baseball, it's got that too! The DVD comes with a great extra called "Training Camp" about preparing actors Suraj Sharma (as Rinku) and Madhur Mittal (as Dinesh) to be pitchers for the movie. I highly recommend this film for everyone.
10 people found this helpful

LDReviewed in the United States on January 28, 2021
5.0 out of 5 stars
Is it a Great Movie, no. Is it a very Good and Interesting movie, yes.
Verified purchase
For some reason I love to watch movies about sports and or sports' figures. So with that in mind I can honestly tell you it will hold your interest, and especially since it is based on a true story. As I rarely if ever watch sports or go to sporting events I knew nothing about these baseball players from India so I was intrigued by the story and the events. I think anyone would enjoy this movie and I have seen it a couple of times......LD

NettieReviewed in the United States on October 19, 2021
5.0 out of 5 stars
Great movie
Verified purchase
I've watched this a couple times and love it just as much each time. I really fun, good movie for all.
See all reviews
Back to top
Get to Know Us
Make Money with Us
Amazon Payment Products
Let Us Help You
EnglishChoose a language for shopping. United StatesChoose a country/region for shopping.
© 1996-2022, Amazon.com, Inc. or its affiliates