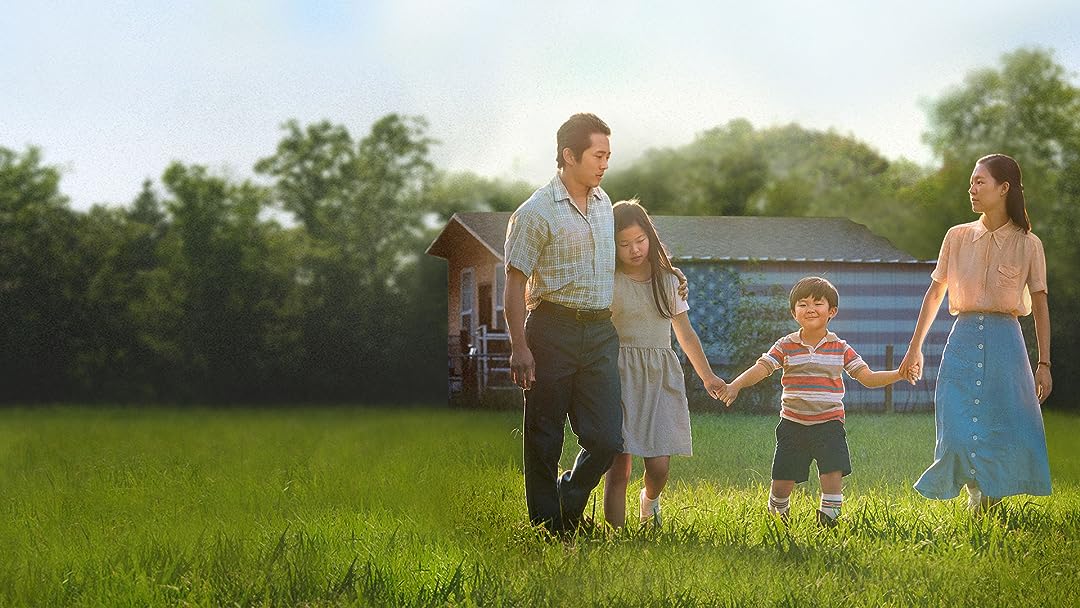 (11,979)
7.51 h 55 min2021X-RayPG-13
A Korean-American family weathers the challenges that come with starting a new life when they move to an Arkansas farm in search of the American dream.

calamityjaneReviewed in the United States on March 14, 2021
5.0 out of 5 stars
The film I didn't know I was starving for.
Verified purchase
My parents immigrated to the US in the late 1960's and raised us in small mid-western towns in the 70's and 80's. We were basically the only Asians wherever we landed. My father preferred the 'wholesomeness' of small town life. We experienced innocent ignorance, awkward curiosity, exclusion and rarely, overt racism. I was never capable of explaining to my non-Asian friends (who were full of goodwill), how my life was so different than theirs. It was too much to explain. It was easier to assimilate in public, protect the privacy of my hyphenated existence, and let them say that I was 'just like them' (their way of saying 'you belong') but landed on me as 'we don't really see you'.

Out of nowhere, 'Minari' is here and has unexpectedly opened a crevasse into my heart, exposing the very specific core of a Korean-American household that I protected...that I thought was too complicated to explain. It is so bittersweet for me to watch. There are many, many tiny details in this movie that will only be recognized by Korean-Americans of my generation. The director has left us secret notes everywhere.

MINARI: The fact that this movie exists, that it is being universally lauded, that it was created with restraint and nuance (not a single cringe) is so shocking to me because it's a thing I never knew I was starving for. It's something I didn't think was possible. To think a thing could be made that opens a clear view into what it meant to come to this country with 'nothing', to work like hell and suffer, to assimilate and have kids that reject the 'homeland' - all while being an extremely tight-knit, isolated nuclear family who loves each other in a verbal and emotional language that is not typical for the average American. It opens my heart and reminds me of the void that's existed in me for so long. I never thought this window could open and expose this life with such dignity and respect. And to see it recognized, appreciated, awarded... to have something of my weird and seemingly inexplicable life celebrated is simply astonishing.

FlowergalReviewed in the United States on February 27, 2021
5.0 out of 5 stars
Watched it 3 times in a Row
Verified purchase
As a Korean American transplant, this movie was like a mirror image to my experience growing up in America in the 70s. The way the kids switch from Korean to American language, that was me. There was a lot more racism back then. This moved showed it in its subtlest form. Phenomenal cast. Superbly done.
198 people found this helpful

VKSReviewed in the United States on February 27, 2021
5.0 out of 5 stars
Absolutely beautiful
Verified purchase
The buzz is true - award worthy performances abound in this film and it is an emotional roller coaster. Just when you think you’ve wrapped your head around the family’s story, they give you an even deeper box to unpack..
112 people found this helpful

BraulioReviewed in the United States on February 27, 2021
5.0 out of 5 stars
Worth the dough $$$
Verified purchase
The story, performances, characters, cinematography, music, set and costume design. It's hard to think of an aspect I didn't like about this film. I don't usually get moved by movies but this one made me cry real tears. There are also funny and heart-warming scenes sprinkled throughout. The movie is dramatic but never unbelievable. I feel like I really got to know this kid's world through his eyes, and I feel like I just learned an important life lesson. One of the best films I've seen this year. I wish it was included free on Prime, but I'm glad I paid for it!
94 people found this helpful

Christopher BaileyReviewed in the United States on February 26, 2021
5.0 out of 5 stars
Stays with you
Verified purchase
The film is much more than a representation of Asian Americans, though that by itself and how powerfully their story is presented makes this a movie that is more relevant now than ever. What will stay with you is its message about the resilience of family and what matters most in life. The frames of life on Arkansas farmland are beautiful and it's lead by powerful performances by all of the main cast. This is a necessary movie to understand that regardless of all our differences, the bond of family is something that we can all relate to.
95 people found this helpful

mReviewed in the United States on February 26, 2021
5.0 out of 5 stars
must see
Verified purchase
one of the best films i have seen in a while
60 people found this helpful

Jesseka WhitmanReviewed in the United States on February 26, 2021
5.0 out of 5 stars
Heartwarming
Verified purchase
Beautiful, heartwarming film for the whole family to enjoy!
47 people found this helpful
See all reviews
Back to top
Get to Know Us
Make Money with Us
Amazon Payment Products
Let Us Help You
EnglishChoose a language for shopping. United StatesChoose a country/region for shopping.
© 1996-2022, Amazon.com, Inc. or its affiliates