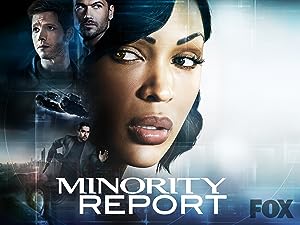 Tirdad DerakhshaniReviewed in the United States on December 12, 2015
3.0 out of 5 stars
Life in post-pre-crime America ... yawn
Verified purchase
Hollywood continues to cannibalize its past with yet another film-to-TV adaptation that should be awarded a prize for marginality. The slick sci-fi thriller Minority Report is an unimaginative riff on Steven Spielberg's 2002 big-screen hit..

Minority Report, which boasts Spielberg as a co-exec producer, is the second series this season to be adapted from a short story by sci-fi maestro Philip K. Dick. (The other Dick adaptation, Amazon’s The Man in the High Castle is a whole, far more welcome, kettle of fish.)

The pilot opens with a tired two-minute introduction that feels like one of those "previously on" montages.

A series of images accompanied by Good's voice-over, walks us through the plot of the 2002 movie: Once upon a time in the year 2050, Washington, D.C., city leaders set up a pre-crime division that enabled police to arrest people before they committed a crime. These crimes were committed by three young psychics, or "pre-cognitives," who could see murders that are about to be committed.

Four years later, the program was killed after an official was caught manipulating the precogs for his own benefit. The three psychics were installed on an island far, far away and told to live their lives.

Now, it's 2065 and one of the precogs named Dash (Sands), returns to the city as a self-styled vigilante out to stop murderers and other evildoers. Trouble is, without the other two precogs, he never gets to the victims in time. That is until he meets Detective Lara Vega (Good).
Good is terrific as the courageous cop who acts first and thinks later. She and Sands play nicely off each other. Wilmer Valderrama is all but wasted as Vega's boss, while Laura Regan pops up briefly as Dash's caring fellow precog Agatha (played by Samantha Morton in the film).

Each succeeding episode has the crime fighters handle more cases in the manner of every procedural we've already seen 100 times. All in all, the show does little to add to the story's mythology

Dick adaptations, such a Blade Runner, used their futuristic premise to say something about the state of affairs in the world of politics, the economy or human rights. Minority Report features cute future gadgets like a flying cell phone that allows users to take great selfies from above, it has very little in the way of pertinent social commentary.

The story is neat. The acting is great.

The story takes place some number of years after the events of the Tom Cruise movie. The precogs from the movie are out of their bathtub and are up and walking around. The series focuses on them. They are the same precogs from the movie (characters, not actors). If you'll recall at the end of the movie the Precrime unit was disbanded. That's where this series picks up. Precrime is a thing of the past and the precogs have been released.

Now one of the precogs wants to come back to willingly use his abilities to prevent murders.

The movie was half action movie half political statement about control/government power. The show is all action drama. The TV show flows well with the movie. The look and feel of the set and special effects (including all the hand motion sensing computers) all match the look of the movie.

The reference to The Simpsons Season 75 Special is hilarious. Pay attention for that one. It's brief.

After a few episodes my enthusiasm has worn off. The story telling just isn't that good. The sci fi is neat, but the overall story is lacking. I hear FOX isn't impressed either and has cut the season from 13 to 10 episodes. That pretty much means the series is doomed.
14 people found this helpful

Nicole GondeckReviewed in the United States on August 30, 2016
5.0 out of 5 stars
I loved this show I had on my watch list forever
Verified purchase
I loved this show I had on my watch list forever!! I just finished the first season, Wally and Vega hell all the cast I thought were fantastic!!! Sadly I just read Fox is not going to do a second season.....booooooooooo, you suck Fox, and you people need to look at Amazon and other places you can buy season 1 and then decide on canceling a series you ding dings!! Anyways I hope Amazon or some other organizations pick up this series for a season 2, please!!!!! I just hope the actor's are available once a organization is smart enough to pick it up!!! I would buy it even on presale that is how bad I want a season 2!!!
2 people found this helpful

I enjoyed this pilot and the seamless integration between it and the original movie. It is a believable story. Let's see where it goes.
23 people found this helpful

Timothy L. RogersReviewed in the United States on October 6, 2019
5.0 out of 5 stars
If only Amazon would continue where Fox bailed out.
Verified purchase
Great show. One season is not enough. Made before it's time I think, here it is 2019 and I see it for the first time because it aired in 2015 which was too early for it. Maybe Amazon will take the hint to continue Minority Report.
2 people found this helpful

Michael L. BuieReviewed in the United States on October 21, 2015
5.0 out of 5 stars
because I love the premise and I love Megan Good
Verified purchase
I felt it initially got off to a shaky start. But, I continued to watch subsequent episodes ... bought the whole season ... because I love the premise and I love Meagan Good. It gets better with each episode and I look forward to the next each time I watch. The characters become more meaningful and you invest in them. The story arc is longer than episode-to-episode, so look further than just one. My advice to you ... give it a chance. If I had advice to give to the cast, settle in and be the person ... no need to try hard; you already have it. Just give us what you got.
2 people found this helpful

S. HayesReviewed in the United States on October 5, 2015
5.0 out of 5 stars
Fantastic!
Verified purchase
First show in a long time that had my full attention. Great acting, great story-line, and really cool tech-geek stuff all of us hard-core sci-fi fans love. I love it when a show takes me back to the Jetsons! And the transition from the blockbuster hit was smooth...like a malbec. I really hope this show does not get cancelled before it gets a chance to jump off. I like to see my favorite young actresses and actors plus some new faces working in their craft.
7 people found this helpful

NegroISOReviewed in the United States on June 30, 2016
5.0 out of 5 stars
Another beautiful show that could have been.
Verified purchase
So here's the thing. I wish this show would have continued on. It basically was the "after the movie ended" series. It had so much potential, and I wish the originally ordered 13 episodes would have made it to light. Sadly we just got 10 of the 13 before they killed the series.

Here's to all those great TV shows that could have been:

Dead Like Me
Alcatraz
Firefly
Terra Nova
Joan of Arcadia
3 people found this helpful
See all reviews
Back to top
Get to Know Us
Make Money with Us
Amazon Payment Products
Let Us Help You
EnglishChoose a language for shopping. United StatesChoose a country/region for shopping.
© 1996-2022, Amazon.com, Inc. or its affiliates