You've subscribed to Miracleman: Parental Advisory Edition! We will preorder your items within 24 hours of when they become available. When new books are released, we'll charge your default payment method for the lowest price available during the pre-order period.
Update your device or payment method, cancel individual pre-orders or your subscription at
Your Memberships & Subscriptions
There was an error. We were unable to process your subscription due to an error. Please refresh and try again. 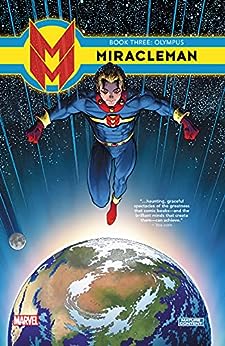 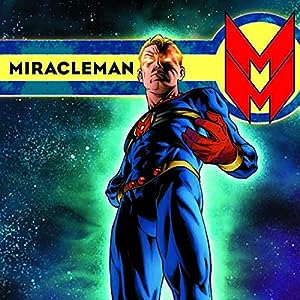 4.8 out of 5 stars
4.8 out of 5
214 global ratings
How are ratings calculated?
To calculate the overall star rating and percentage breakdown by star, we don’t use a simple average. Instead, our system considers things like how recent a review is and if the reviewer bought the item on Amazon. It also analyzes reviews to verify trustworthiness.
Top reviews

Trust fund squanderer
5.0 out of 5 stars 20th Century Renaissance Man Alan Moore
Reviewed in the United States on April 10, 2016
Verified Purchase
Having read and bought Moore's Swamp Thing, League of Extraordinary Gentlemen, From Hell, The Watchmen and V for Vendetta this series is beyond a doubt far superior in breadth and scope than any of these- which is truly saying something. Thankfully Marvel republished the series and as an added bonus there are orginal sketches by all of the artists including Rick Vietch in the back of each volume. For decades for various unknown and even some business reasons none of us in the graphic novel universe fandom were able to participate in the mind blowing existential and philosophical journey this series offers. Prepare yourself before you begin- and be thankful if you already know Moore is a genius of the highest caliber - in life we should save his best for last this this is it!
Read more
5 people found this helpful
Helpful
Report abuse

Daniel Feroli
5.0 out of 5 stars imaginative and engaging
Reviewed in the United States on March 12, 2018
Verified Purchase
It's a little tough to say exactly why I enjoyed this story so much. The short version would be that you can feel the creativity in every word and every drawing this novel has. Much of the build up from the previous volumes gets addressed and expanded upon in interesting ways.
Some people may be disappointed that the end result has less action then they may have been expecting (though it does get brutal and gruesome at one point), but for me the spectacle of it all had me hooked throughout the story
And major credit to this "The Original Writer" fellow. I wonder if he did anything else...

Matthew D'SouzaTop Contributor: Batman
TOP 500 REVIEWER
5.0 out of 5 stars Moore's Miracleman Finale!
Reviewed in the United States on June 26, 2017
Verified Purchase
Alan Moore's poetic writing style is finally established and elevated to Miracleman's contemplative godhood lifestyle in the Alan Moore run finale of Miracleman, Vol. 3: Olympus. Brilliant writing that plays off of the very best and the vest worst of the human condition. Moore writes with class and style that brings the whole story and themes home. He asks what happens to the superman once he loses the part of him that is man?

John Totleben's art is the most gorgeous, detailed, horrific, and grand that the series has ever seen. Totleben's Saga of the Swamp Thing art is some of the finest that comics have ever seen and he brings that skill in his stunning illustrations for Olympus. I highly recommend this book as it is very intelligent and looks at what would happen to a superhero uncontested by villainy in the end. What could superheroes do to shape the world? Moore thought of this and so much more!
Read more
Helpful
Report abuse

D.Staples
5.0 out of 5 stars Alan Moore’s First Deconstructing Masterpiece
Reviewed in the United States on December 6, 2018
Verified Purchase
I LOVED how deep the rabbit hole of superhero mythology went in this three volume arc. Mr. Moore penned a seminal work that rewards mature readers who are familiar with the tropes used throughout the Gold and Silver Ages of comics. He bends and twists them to show the highs and lows humans could reach if given godlike powers. The highest rating was given because this work inspires me to write better and better due to its fearless take on four color moralities.
Read more
One person found this helpful
Helpful
Report abuse

Mr. Mayor
5.0 out of 5 stars So intense
Reviewed in the United States on November 27, 2018
Verified Purchase
This is where things get good. Issue 15 was groundbreaking. Where's the movie? Drink wrapped.
Read more
Helpful
Report abuse

Marc Goldfinger
5.0 out of 5 stars Kid Miracleman's Revenge
Reviewed in the United States on October 11, 2012
Verified Purchase
Miracleman: Olympus, the coup de grace of Alan Moore's arc of Miracleman (Marvelman), is hard to get and expensive, especially in hard cover. But it is a book that graces one's collection of graphic novels with power; it almost glows from the book case.

The Gods are at play with Miracleman in Olympus, while Mike Moran's (Miracleman's other) wife decides she's had enough. The child Winter names herself and while the Gods dance, in the orphanage where poor Johnny Bates resides, he is the target of bullies. When the bullies decide to rape Johnny, Kid Miracleman (the monster) finds his way out.

What happens to the nice nurse at the orphanage? What does a crazed Kid Miracleman do to the people of London before Miracleman is made aware of the chaos? The graphic novel battle of the century takes place. Well worth every penny.

True, the fight for ownership of this story is settled and Marvel owns the rights. I'm looking forward to an Omnibus of this but the 1st print hard covers and soft covers of Miracleman: Olympus are staying on my bookshelf. One day my children will inherit them and they can decide what to do with them.

Aron Englefield
5.0 out of 5 stars Back on vol.1 form and then improves on it.
Reviewed in the United Kingdom on November 12, 2018
Verified Purchase
The artwork I hate. I wish Garry Leach from vol.1 had stuck around, and I hated vol.2, too messy.
But this....the story is back up to the quality of vol.1 and more....astonishing and thought provoking, it took me a while to ‘come down’ from having read it. Much more so than ‘The Watchmen’, in fact. Miracleman started out being even more of a ‘comic about comic characters’ than ‘The Watchmen’ was, but ends up far less so, and being about all of us.
It’s a profound piece of work.
Just buy it, you won’t regret it.
Read more
One person found this helpful
Report abuse

M. W. Hatfield
5.0 out of 5 stars Powerful conclusion to the original Marvelman/ Miracleman saga. Recommended for all fans of graphic novels.
Reviewed in the United Kingdom on May 30, 2015
Verified Purchase
Brilliant, if overwritten conclusion to the Alan Moore run. Dated? Only in the sense that so many people have stolen Moore's techniques, his panel transitions, the verbiage, the horrific imagery- but usually without his style, his intent, his originality.The assault on London is still harrowing, still shocking, and the Utopian conclusion is STILL bizarre and startling. Not what anyone expected The package here is odd,because the Miracleman stuff, which is fabulous, accounts for about half the content. There are two brief lost Mm stories, one by Grant Morrison, and I bet Alan Moore is just going to love that inclusion. Then half the book is sketchbook work. Nice enough, but feels like padding. This didn't bother me at all, because I saw that as extra bonus content, not what I was paying for. But some may see it as an excuse for bumping up the price...doesn't spoil it for me. What I would really have liked was Alan Moore's perspective on the material now and scriptural,but that is not to be, sadly. We still have the original work. By the Original Writer. And that's good enough for me!
Read more
7 people found this helpful
Report abuse

Kevin Trebell
5.0 out of 5 stars Epic end to a brilliant and formative series.
Reviewed in the United Kingdom on July 2, 2015
Verified Purchase
Though a keen fan of British comics , Warrior was one that had passed me by so I never got to read Miracleman first time around.

The first two volumes were fantastic, taking the character from his 1950's roots, subverting it beautifully and then building to a dark and mature story (something that would have been pretty unique when it was first published).

I'm pleased to say the conclusion hasn't been disappointing at all. I don't want to spoil anything but will say it is in turns very dark (in fact I see what Morrison was paying homage too in Zenith now) and also very uplifting.

Early on the book is a hard read, very heavy on the prose but it soon builds to a captivating read that I couldn't put down. I didn't know what was coming and I wasn't disappointed.

Overall a great end to a really stunning series, one that can be seen now to have been hugely influential as the 80's Dark Age of comics arrived.
Read more
3 people found this helpful
Report abuse

vectisfabber
5.0 out of 5 stars Stick with vol 1
Reviewed in the United Kingdom on June 27, 2021
Verified Purchase
I loved vol 1 and 2, although I thought 2 was let down by poor art. I have been looking forward to vol 3 for decades. I confess to being disappointed. Totleben's art is spectacular, but I found Moore's writing, usually so crisp and clear even when cleverly dealing with hidden themes, multiple meanings etc., to be overly dense and much less accessible than I was hoping for.
Read more
Report abuse

WWolf
5.0 out of 5 stars What do comic books want to be when they grow up?
Reviewed in the United Kingdom on March 15, 2016
Verified Purchase
Stuff me. This is what comic books dream of being when they grow up. This takes the whole idea of the logical extension of what all super-heroes are supposed to want - and then just sort of leaves it there without giving us any easy answers. I really hated Book 2 - and still do - but Book 3 redeems it. It is the work of two men at the top of their game; art and story perfectly complementing each other. It's got the thrills and spills and big superhero battles; it's got aliens, talking babies, moments of silly humour. It's got moments of true pathos, gore and death by the coffin load; philosophy and more questions than you could shake a quinjet full of avengers at.s at. Buy this book and be happy.
Read more
2 people found this helpful
Report abuse
See all reviews