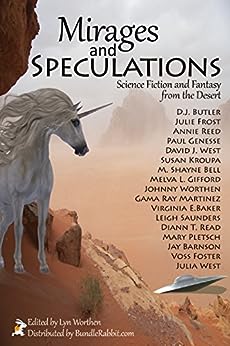 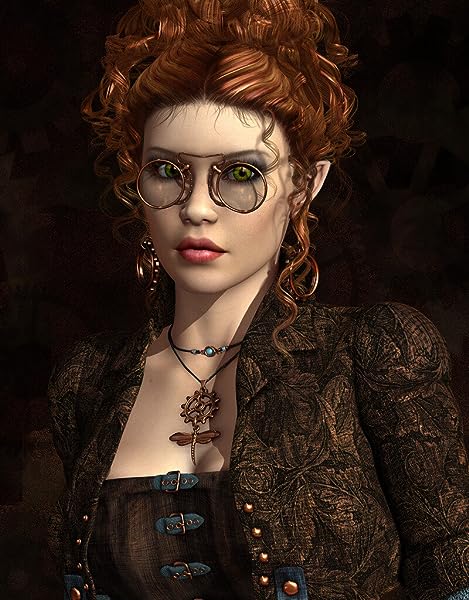 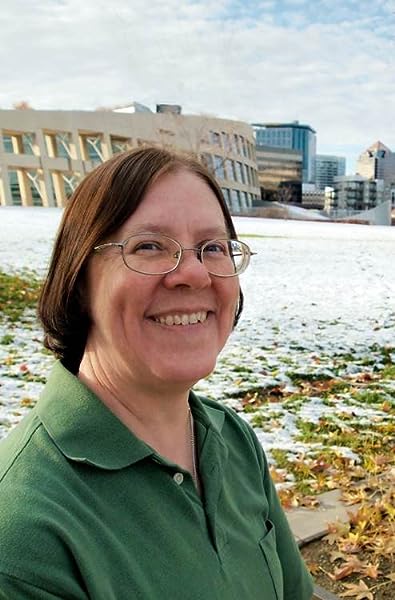 Mirages and Speculations: Science Fiction and Fantasy from the Desert Kindle Edition

by Lyn Worthen (Author), Annie Reed (Author), D.J. Butler (Author), Gama Ray Martinez (Author), Johnny Worthen (Author), Julia H. West (Author), Melva L. Gifford (Author), Virginia Baker (Author), Leigh Saunders (Author), Jay Barnson (Author) & 7 more Format: Kindle Edition
See all formats and editions
Sorry, there was a problem loading this page. Try again.
Is the glimmer on the horizon a lake, shimmering under the hot desert sun – or a flying saucer visiting from a distant planet? Are those swirling clouds dust devils or djinn? In Mirages and Speculations seventeen authors of science fiction and fantasy take you on journeys to high mountain deserts, scorching sands, and wind-swept plateaus. Their stories will make you laugh and make you cry, as you visit worlds both futuristic and fantastic, the products of imaginations baked under desert skies until only Mirages and Speculations remain.
Read more
Previous page
Next page

Voted in the "Top Ten Anthologies of 2017" in the Preditors & Editors Annual Readers' Poll, and named a "Recommended Read" by the League of Utah Writers.

Noelle
5.0 out of 5 stars A Gold Mine for Finding New Authors
Reviewed in the United States 🇺🇸 on September 14, 2017
Verified Purchase
I rarely buy these anthologies, but a friend had a story in it, so I bought the collection to read hers. When I was done with that, I began reading cover to cover and was surprised--and gratified--that nearly every story was of the same high quality. Some of these stories are well worth the price of the book by themselves, so an entire collection of them adds up to a great read at a great price. It's a great read by itself, but more than that, it's introduced me to new authors (not new to the business of writing, clearly, but new as in I didn't know about them) and I expect to mine those names for some excellent new reads going forward.
Read more
2 people found this helpful
Helpful
Report abuse

Fumitaka Joe
5.0 out of 5 stars A solid anthology full of interesting stories
Reviewed in the United States 🇺🇸 on October 26, 2017
Verified Purchase
I really enjoyed this anthology. Some of the stories I'd read years ago, but there were quite a few new stories as well. All of the stories, whether old or new, kept my interest. You can read my full review over on MySF Reviews.
Read more
One person found this helpful
Helpful
Report abuse

Janix Moon
5.0 out of 5 stars Worth it!
Reviewed in the United States 🇺🇸 on September 29, 2017
Verified Purchase
Top notch authors. That story by Paul Genesse made me cry so much (in a good way)
Read more
One person found this helpful
Helpful
Report abuse

Theah1771
4.0 out of 5 stars A Treasure Book of Tales and Authors
Reviewed in the United States 🇺🇸 on August 2, 2020
I bought this book at a conference. Wow! There are a lot of beautiful and moving stories in here, and some just for fun! Editor Worthen did a good job of choosing a fine range of stories, and included several stories about different cultures and peoples. My favorites include Seven Stars, Soul Walls, and Cry the Name of David. Most of these authors I had never heard of, but I will be searching out more of their work.
Read more
One person found this helpful
Helpful
Report abuse

Brook
5.0 out of 5 stars A broad range of intriguing tales.
Reviewed in the United States 🇺🇸 on September 29, 2017
An amazing of collections. It's wonderfully eclectic, with stories about sci-fi, Native Americans, contemporary, and even a story about post apocalyptic Native Americans. Yet the underlying theme of the desert, as subtle as it can be at times, brings them all together into a beautifully coherent whole.
Read more
2 people found this helpful
Helpful
Report abuse
See all reviews