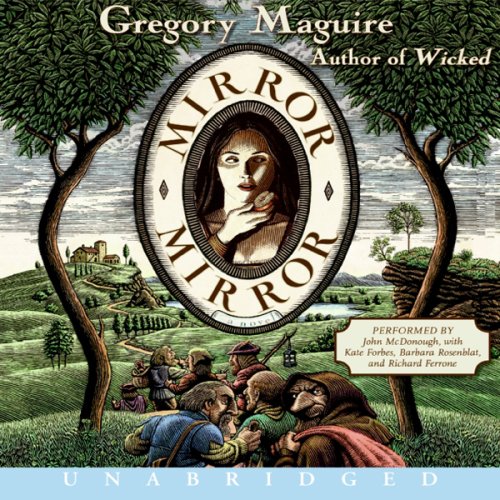 4.3 out of 5 stars
4.3 out of 5
295 global ratings
How are ratings calculated?
To calculate the overall star rating and percentage breakdown by star, we don’t use a simple average. Instead, our system considers things like how recent a review is and if the reviewer bought the item on Amazon. It also analyzes reviews to verify trustworthiness.
Top reviews

Elsa S.
5.0 out of 5 stars Another Gregory Maguire masterpiece
Reviewed in the United States on December 10, 2018
Verified Purchase
I adore the story of Snow White, and Gregory Maguire's rendition is no exception. It's one of those books that draws you in, and when it ends you're left wanting more but fully satisfied at the same time. Beautifully descriptive and imaginative, like a painting. There are scenes that may trigger trauma survivors; personally I see Snow White as the story of a girl who becomes resilient and miraculously survives abuse when it seems most impossible. This tale drives that home. This is a tale that makes you believe in the impossible. One of my favorite reads I will be reading again and again for years to come.
Read more
4 people found this helpful
Helpful
Report abuse

Katy
2.0 out of 5 stars Not his best.
Reviewed in the United States on January 31, 2013
Verified Purchase
First, I just have to say that I adore Gregory Maguire. I've read the entire "Wicked" series, and am completely enamored with it. It was such a wonderful story, full of detail, and plenty of good writing. He is definitely a master of storytelling. I am a huge fan of Wizard of Oz in general, but I find myself enjoying Maguire's Oz more than the Oz we're all used to.

I read "Confessions of An Ugly Stepsister" after I finished the "Wicked" series. I thought it was a wonderful retelling of "Cinderella" and I just knew that when I picked up "Mirror, Mirror" I'd be captivated from the first page. I was sadly disappointed. I had so much trouble getting through all the description of Montefiore. It seemed that Maguire could go on and on for pages and pages about the landscape and architecture. Beautiful descriptions, don't get me wrong, but there was simply too much of it. Also, Vicente's personality is so drab to me, and I didn't understand why it was necessary to spend so much time describing his moods and behaviors. I also feel as if there was entirely too much back story of the Borgia's. This could be because I've never been a fan of history, especially regarding a family from 1500 Italy. It was just boring, and unnecessary to the plot. I feel Maguire could have compressed their history into less pages, leaving more room for the actual story to develop. Even the hunters history was more lengthy than it needed to be.

I am disappointed that it has taken half the book for the story to really get started. I haven't finished this book yet, and am debating whether I should. I have never had to force myself to read any of Maguire's books and am sad that that's what I've had to do with this one since the first sentence. I can't imagine the story unfolding as it should with only the last half of the book remaining. Seems to me it's going to be a mad dash to the end, which won't end well.
Read more
8 people found this helpful
Helpful
Report abuse

Young Wordsmith
2.0 out of 5 stars Not Maguire's best, which is a shame.
Reviewed in the United States on May 6, 2008
Verified Purchase
Confessions of an Ugly Stepsister and Wicked being two of my favorite books, I was excited to dig in to Mirror Mirror. However, after only about two dozen pages I found myself losing interest because I was profoundly confused about who was telling the story.

In a nutshell, that was the main problem I had with Mirror Mirror: though Maguire's descriptions were as textured as ever, the fragmented narration made it difficult to fully relate to the characters. The characterization in his other books was so layered that I cared about the major and minor characters alike (even in Son of a Witch, which while good was not quite as dazzling as its predecessor). This story focuses on Bianca and her father, Vicente, but I did not feel particularly connected to either of them - they seemed to function more as symbolic placeholders than as actual people. The one real exception to this problem was Lucrezia Borgia: Mirror Mirror was really her tale, and she was by far the most engaging character to me. But her voice is only peppered throughout the narrative; Bianca, Vicente, and the dwarves also speak at different times, and I found the structure too fragile to be effective.

The magical elements in this story did not gel for me, either. The magical elements in Wicked were inherent to the story and Confessions used folk superstition to create an air of the supernatural, but I did not feel I had to totally suspend disbelief to read either one. With Mirror Mirror, though, the branch from the Tree of Knowledge was a hard pill to swallow (what the heck was up with the final chapter?), as was the dwarves' characterization. The dwarves are first described as primitive creatures born of the earth, more mineral than human, yet simply by Bianca speaking to them are they able to speak the languages of men with complete fluency. While I realized that Maguire was asking the reader to explore the idea of imagining something into your own reality, that whole concept seemed out of place in this setting.

I managed to finish this book because I do adore Maguire's descriptive prowess and the sly wit he incorporates into the dialogue, but Mirror Mirror is definitely not his best showing - which is sad, because he had some fantastic ideas to work with. If you're a fist-time Maguire reader, start with Wicked or Confessions of an Ugly Stepsister.
Read more
5 people found this helpful
Helpful
Report abuse

gac1003
5.0 out of 5 stars An entertaining re-telling of a classic fairytale
Reviewed in the United States on April 3, 2004
Verified Purchase
When Vincente de Bevada requested some land from Cesare and Lucrezia Borgia, little did he know the price they would demand of him. When they arrived years later at his home of Montefiore, Cesare demanded an almost impossible task: to retrieve a branch from the Tree of Knowledge that still bears three perfect apples. With threats to his home and family, Vicente reluctanly agreed, leaving his daughter Bianca in the care of Lucrezia.
As the years passed, Cesare became enchanted with the young Bianca, much to the dismay of his sister, Lucrezia. In a fit of jealousy, she hired a huntsman to take Bianca into the woods to get rid of her so beginning Gregory Maguire's unique spin on the Snow White story.
It's filled with all the things that everyone already knows about Snow White: the magic mirror, a poisoned apple, the seven dwarfs (though they aren't the cute ones from the movie). Yet, Maguire has set them in a real place, 16th century Italy, with real historical figures playing major roles, such as Lucrezia Borgia as the great wicked-stepmother-type. She's perfect inthe part, especially with the notorious background of the Borgias. It reads almost as if it were a real chapter in the Borgia history.
I found the story incredibly entertaining and didn't want to put the book down once I began. Taking a well-known story and making it new is a difficult task which Maguire handles with ease, much like in his other works. A fine and entertaining book.
Read more
4 people found this helpful
Helpful
Report abuse
See all reviews

Rebecca Hurley
5.0 out of 5 stars Interesting read
Reviewed in the United Kingdom on August 26, 2019
Verified Purchase
This book has become highly addictive and I read it within the day. It kept me on the edge of my seat from the second I picked it up and could not put it down until I had finished.
I LOVE THIS SERIES
Read more
Report abuse

mandicat2005
3.0 out of 5 stars Not his best
Reviewed in the United Kingdom on March 29, 2011
Verified Purchase
I love Gregory McGuire and Confessions of An Ugly Stepsister is one of my favourites. Mirror Mirror just isn't in the same league though. At points there are hints of his potential, but often it just doesn't flow and the idea of entiwining the Snow White story with the historical Borgia's is clunky; the metaphors either a little obtuse or way too obvious. Disappointing.
Read more
3 people found this helpful
Report abuse

Anna M.
4.0 out of 5 stars Good book
Reviewed in the United Kingdom on March 9, 2019
Verified Purchase
Not as good as his other books.
Read more
Report abuse

Rh
4.0 out of 5 stars Four Stars
Reviewed in the United Kingdom on September 20, 2014
Verified Purchase
Nearly as enjoyable as Wicked, but the storyline was not as compelling.
Read more
Report abuse
See all reviews
Back to top
Get to Know Us
Make Money with Us
Amazon Payment Products
Let Us Help You
EnglishChoose a language for shopping. United StatesChoose a country/region for shopping.
© 1996-2021, Amazon.com, Inc. or its affiliates